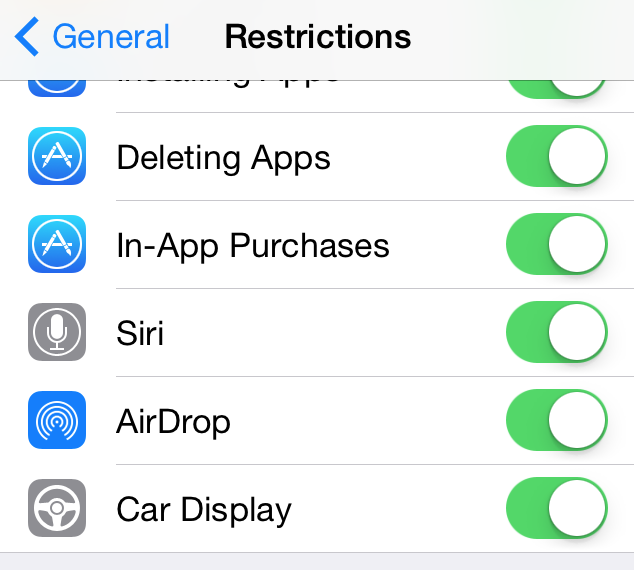 One of the big iOS 7 features Apple showed off during its WWDC event in June was called iOS in the Car. The feature allows for deeper integration between iOS devices and vehicles, enabling users to view iOS apps on factory in-dash displays.

Until now, the feature has not been available, but it looks like the upcoming iOS 7.1 update will change that. Earlier today, Apple seeded the second beta of the firmware to developers, and it includes a new Settings on/off toggle for a Car Display…

9to5Mac was first to report the newly-added feature:

“Right on time, the latest beta of iOS 7.1 has added a toggle to enable or disable “Car Display” in the Restrictions Settings panel. We also understand from multiple sources that Apple has greatly increased the amount of iOS in the Car references in both iOS 7.1 beta 1 and in the new beta 2.

While it is always possible that iOS in the Car gets delayed further into 2014, it currently seems like Apple is targeting a launch for iOS in the Car alongside iOS 7.1 next year.”

And here, again, is Apple’s description of iOS in the Car:

“iOS in the Car seamlessly integrates your iOS device — and the iOS experience — with your in-dash system. If your vehicle is equipped with iOS in the Car, you can connect your iPhone 5 and interact with it using the car’s built-in display and controls or Siri Eyes Free. Now you can easily and safely make phone calls, access your music, send and receive messages, get directions, and more. It’s all designed to let iPhone focus on what you need, so you can focus on the road.”

In June, hidden code was discovered within an earlier iOS 7 beta that suggested that iOS in the Car could connect with vehicles via Apple’s wireless AirPlay technology, as well as a standard USB connection, to mirror apps, Maps, and other data.

A number of car manufacturers—including Acura, Mercedes-Benz, Infiniti, Ferrari, Chevrolet, Hyundai, Volvo, Opel and Jaguar—have already pledged support for the feature. And this month, Honda took the first step with its HondaLink service.

On a conference call with investors, Tim Cook noted that iOS in the Car is a key part of Apple’s ecosystem.