Among the many new features Apple introduced in iOS 7 is an interesting one called ‘iOS in the Car.’ It enables you to mirror your iPhone on your in-car display, allowing you to access Maps, Messages and other apps without having to take your eyes off the wheel.

Outside of that, and a list of the handful of auto-makers that have pledged to support it, not much has been said about the feature. A new report is out this afternoon, though, that offers up some new details on the whole thing. And apparently it’s going to work over Wi-Fi…

“Since then, we have heard from the same sources that the feature is designed to work over AirPlay (in addition to USB/Lightning).

Hamza Sood, who has located several hidden features in iOS 7, corroborates this with a finding inside of internal Accessory Developer options in iOS 7.

And here’s the screen shot: 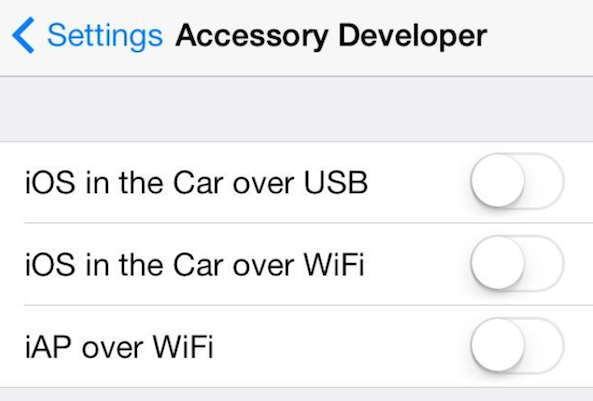 The site goes on to say that it’s hearing Apple is already at work on a point update (something like 7.1 or 7.2), and this new version will include built-in support for iOS in the Car. Apple has said itself that the new feature will officially launch in 2014 with several auto-makers.