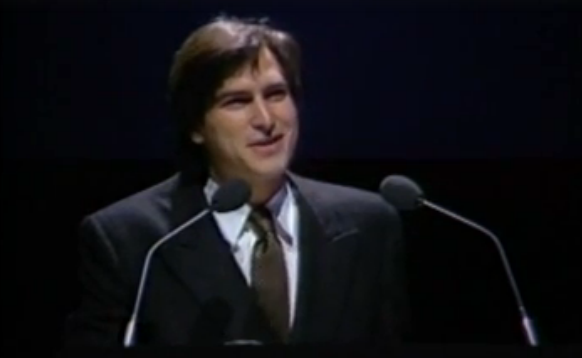 On January 24, 1984, Steve Jobs demonstrated the original Macintosh for the first time at an Apple shareholders meeting in Cupertino. You’ve probably seen a video of the presentation; it’s the one where Jobs is introduced by a joke-telling Mac.

But what many people don’t know is that the Apple co-founder gave another presentation for the computer less than a week later at a meeting of the Boston Computer Society. And that presentation has remained largely unseen until this weekend…

Time’s Harry McCracken (via MacRumors) managed to track down a video of Jobs’ first public Macintosh demonstration, which was shot by a local videographer. It has been tucked away for nearly 30 years, stored on a media format called U-matic.

Here’s the clip, which is surprisingly high-quality for a 3 decade-old amateur job. It’s about 96 minutes long.

And here’s McCracken with a little bit of background information on the presentation, and the video itself:

“The Cupertino and Boston demos may have been based in part on the same script, but the audience, atmosphere and bonus materials were different. In Cupertino, Jobs spoke before investors, towards the end of a meeting which also included dreary matters such as an analysis of Apple’s cash flow. In Boston, he presented to the kind of people who Apple hoped would buy Macs. You didn’t even have to pay the BCS’s $24 annual membership fee to get in, which meant that the meeting was the closest thing the computer had to a launch event intended for the general public. […]

As presented here, the video — which is a rough cut of the version which the Computer History Museum will preserve — has a few moments which have been reconstructed. The slides which Jobs shows are the same ones he presented in Boston, but they’re borrowed from the video of the Cupertino event.”

The entire Times piece is worth a read, and if you have time, the video is pretty good too. Although Steve Jobs is very young here, he looks almost as comfortable on stage as he did when he presented the iPad—smiling, cracking jokes, and of course selling.

In all, this seems like a fitting way to cap off a weekend of celebrating the Mac’s 30th anniversary.