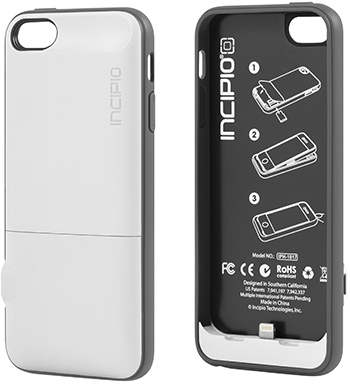 Incipio announced today the launch of its new Cashwrap Mobile Wallet Case for the iPhone 4, 4S, 5, and 5s. The case features NFC tech, and works with the Isis Mobile Wallet app that lets users pay with their smartphones at participating retailers.

The accessory-maker has teamed up with AT&T to bring the Cashwrap to the masses, and it will be available in the company’s stores starting this month. The goal here is to get more iPhone owners using the carrier-backed Isis for mobile payments…

“Incipio®, designer and manufacturer of award winning mobile device accessories, announced today the launch of the Cashwrap™ Mobile Wallet® Case. The Cashwrap™ Case is available online for $69.99 starting January 24, and in AT&T company owned retail locations across the country starting on January 31.

Using the Incipio Cashwrap™ Case, consumers with an iPhone 4, 4S, 5, and 5S can utilize the Isis Mobile Wallet® to pay and save at stores with just a tap of their smartphone. The Isis Mobile Wallet holds participating payment and loyalty cards, as well as offers. The Incipio® Cashwrap™ Mobile Wallet Case is the only Near Field Communication (NFC) mobile solution for iPhone 5/5s.”

For those unfamiliar with Isis, it’s a joint venture between AT&T, T-Mobile and Verizon in the mobile payment space. The NFC-based service has actually been around for a while now, but it’s only just now starting to pick up steam across the United States.

Here’s a promo clip for Isis:

The Cashwrap Mobile Wallet Case launches online today and will hit AT&T stores nationwide on January 31 for $69.99. It includes a secure element microNFC and Micro-USB cable, and is offered in a variety of colors including Black/Black and Pink/Gray.