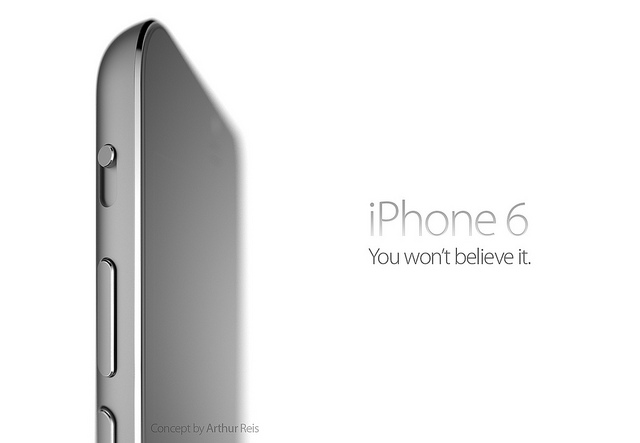 Riding high on the iPhone 6 meme, The Wall Street Journal is reporting (or re-iterrating) that Apple will release two gaint-sized iPhone models this year and scrap the plastic iPhone 5c design. The new iPhones won’t have curved-screens (thank God!) and shouldn’t be expected this summer, as some misinformed analysts have said.

Contrary to some previous reports, the financial newspaper is expecting one of the big iPhones to include a screen measuring four and a half inches diagonally. The other phone should be what you’d call a phablet, a device featuring a five-inch screen…

Apple plans an iPhone model with a screen larger than 4½ inches measured diagonally, and a second version with a display bigger than 5 inches. Until now, Apple’s largest phone has been the 4-inch display on the iPhone 5.

They’ve learned this from people familiar with the situation, in case you’re wondering.

Both large-screened iPhones are said to feature metal casings like that on the current flagship iPhone 5s, are expected in the second half of this year and won’t have curved-screen design.

The smaller of the two models is further along in development, and is being prepared for mass production, the people said. The larger-screen version is still in preliminary development, they said.

As for the iPhone 5c, expect Apple to kill off that model, presumably amid weak reception. Specifically, Apple is expected to “scrap the plastic exterior used in the iPhone 5c,” the article mentions.

There has been some commotion around the jumbo-sized iPhones meme.

But consider that bigger screens are particularly popular in China, Apple’s second-largests market and a priority for the company. Besides, enjoying one’s apps and media is more pleasing on a bigger canvas, as is typing on the virtual keyboard.

Earlier today, we passed along an analyst note claiming Apple had locked down the design of the next iPhone.

Specs are said to include a 4.8-inch display and 802.11ac Gigabit Wi-Fi networking. The note specifically advised against an iPhone with a screen size exceed five inches due to Apple’s “unwavering principle of one hand use.”

Anyone still having any doubts that bigger iPhones are coming?