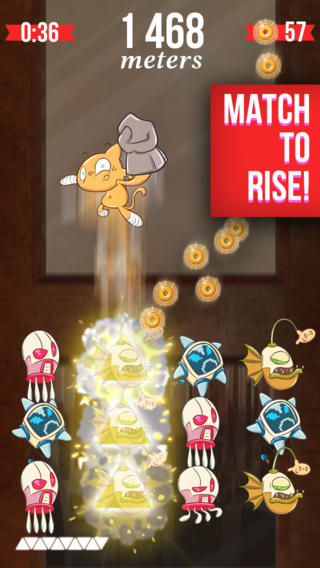 When I think of match-three games, I think of Bejeweled. Maybe that’s because it is the most popular version of the object matching game in the entire world. Lining up gems to clear the board isn’t the only type of matching out there. Sometimes, you just want to bash a match out of existence.

The game is somewhat similar to Knightmare Tower. Players shoot up vertically as high as can be. As you make matches, you rise higher and higher. The further you progress, the more points you earn. 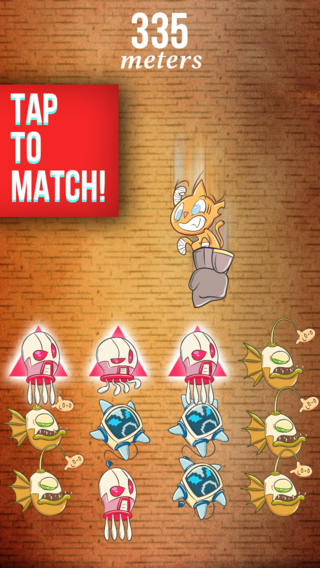 Instead of slicing monsters in two, players stay afloat by matching up alien creatures and then smashing them out of existence. You also don’t get the opportunity to keep going until you reach the top. In this game, the flight lasts for 60 seconds. No more, no less.

Your job is to get as high as possible in the short period of time. Your meter scale accumulates and you increase in levels as you play. New items are unlocked as you gain experience. You can get new smashing rockets, earn combo points, and collect coins.

To rearrange the aliens so that they match up, tap one column. The goal is to get at least three matching aliens side-by-side. You can match four for extra points. Tap each column until at least three aliens are next to each other. Then, tap the screen to watch your boxing cat smash them down. The more matches you make, the higher you will go. 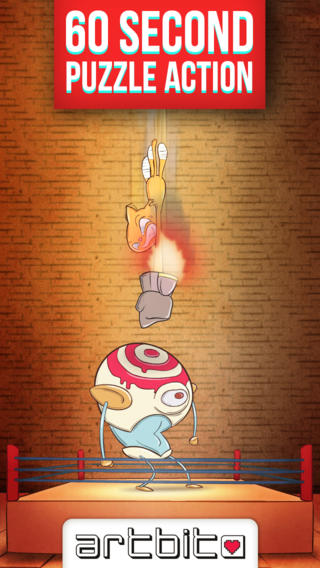 After your minute is up, you will head straight down into a boxing ring where your cute little cat will pound his alien enemy to dust with one massive strike.

The higher you go, the more coins you will earn. After you’ve progressed to higher levels, you can use your earnings to purchase new rocket gloves. These smashing devices make getting back to the ground a lot faster, which is very useful when you regularly soar above 5,000 meters.

This game is very simple and only has one control, tap. You must tap to rearrange creatures, tap to smash them, and tap to send the rocket glove straight down to the ground (technically, you hold down a button, not tap it).

ZEZ is available on the iPhone, iPad, and iPod touch for free. Download it in the App Store today.

What do you think of ZEZ? Does it look like a smashing good time to you?