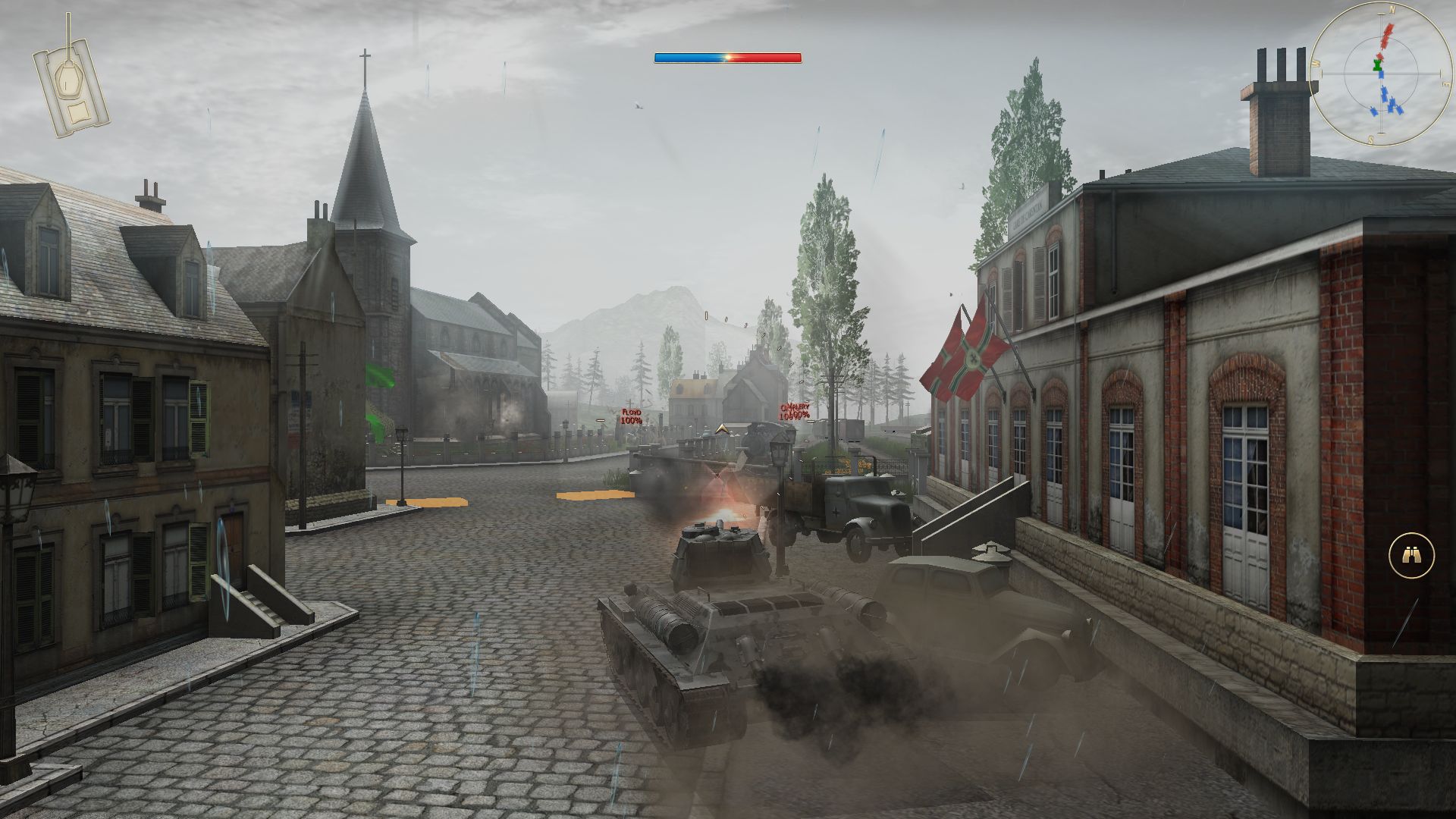 Last week, their new iOS game was released in the App Store, Battle Supremacy for the iPhone and iPad, now available for $4.99. In Battle Supremacy, you’re in control of the World War II tanks such as the Panzer III.

The game is going to delight you with the visual awesomeness, challenge your gray matter with tactical thinking and single player campaigns scattered across the French, Russian and Pacific theaters of World War II and test your skills with a nicely done online multiplayer mode.

Just don’t call it yet another tank shooter because that’s precisely what Battle Supremacy is not about. Read my full review right below…

Battle Supremacy was shown off at Apple’s October 2013 event so it’s no surprise it debuted on the App Store with Apple’s Editor’s Choice seal of approval. And yes, it’s an iOS-exclusive.

Before we dive into it, check out the trailer first.

That was nice, no?

Eye-candy graphics
Battle Supremacy excels in the visual department – this game has an eye for detail.

We’re talking console-quality graphics here. The maps are huge – especially in multiplayer – and the open world stuns with intricate detail such as fish in the water, mountainside villages and big cities with tunnels and bridges and forests. The changing weather sways the trees with the wind and the occasional snow and rain reduce visibility.

But we’re just getting started… 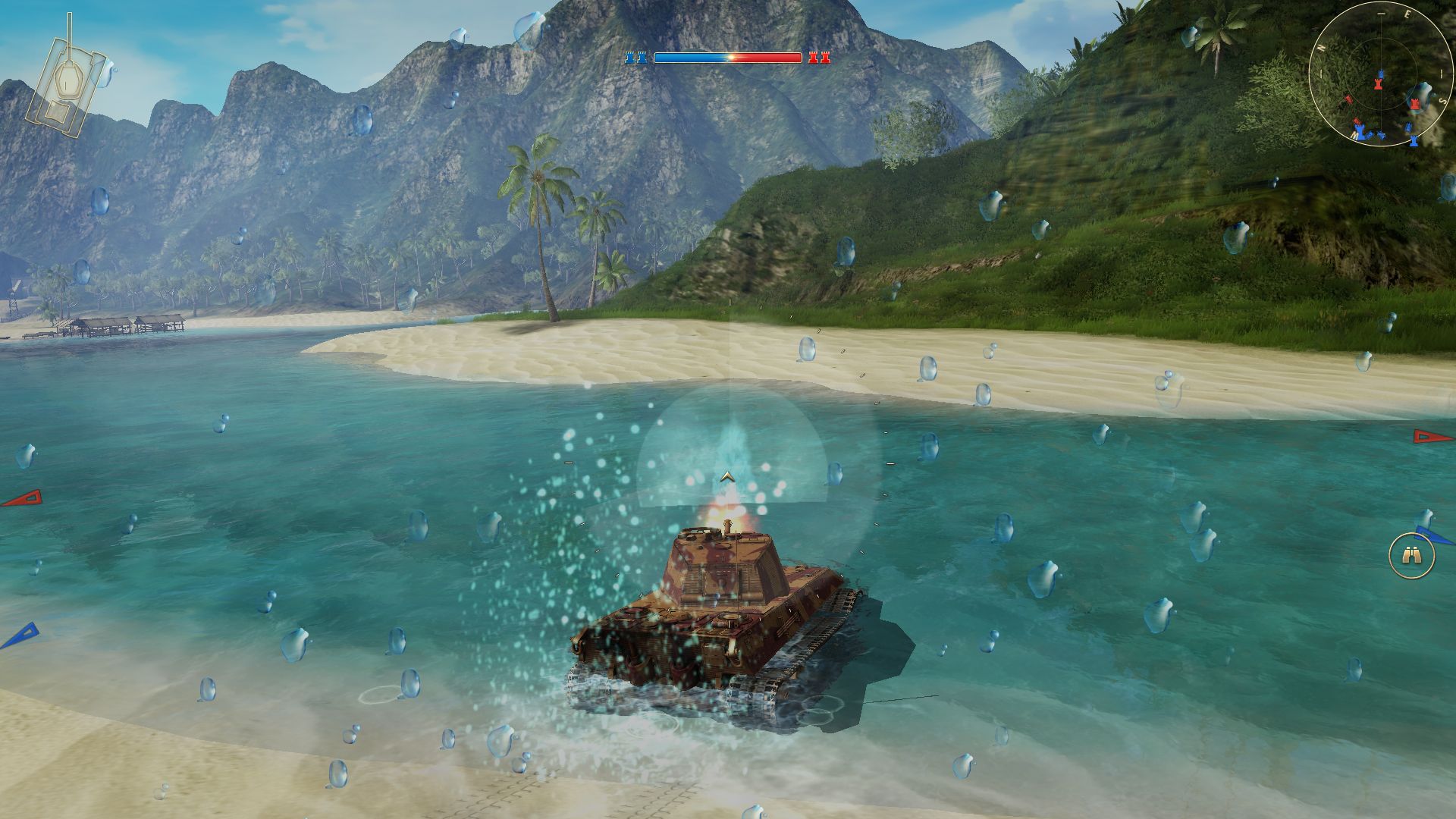 The buildings and various other objects respond accordingly when gunned down or ran over. The real-world locations are accurately depicted – this is a sim game, after all. The visuals also serve the tactical purpose of gaining advantage over the enemy forces.

For example, hide behind a building in order to buy yourself some time after finding yourself under heavy fire or outflanked by the enemy forces. 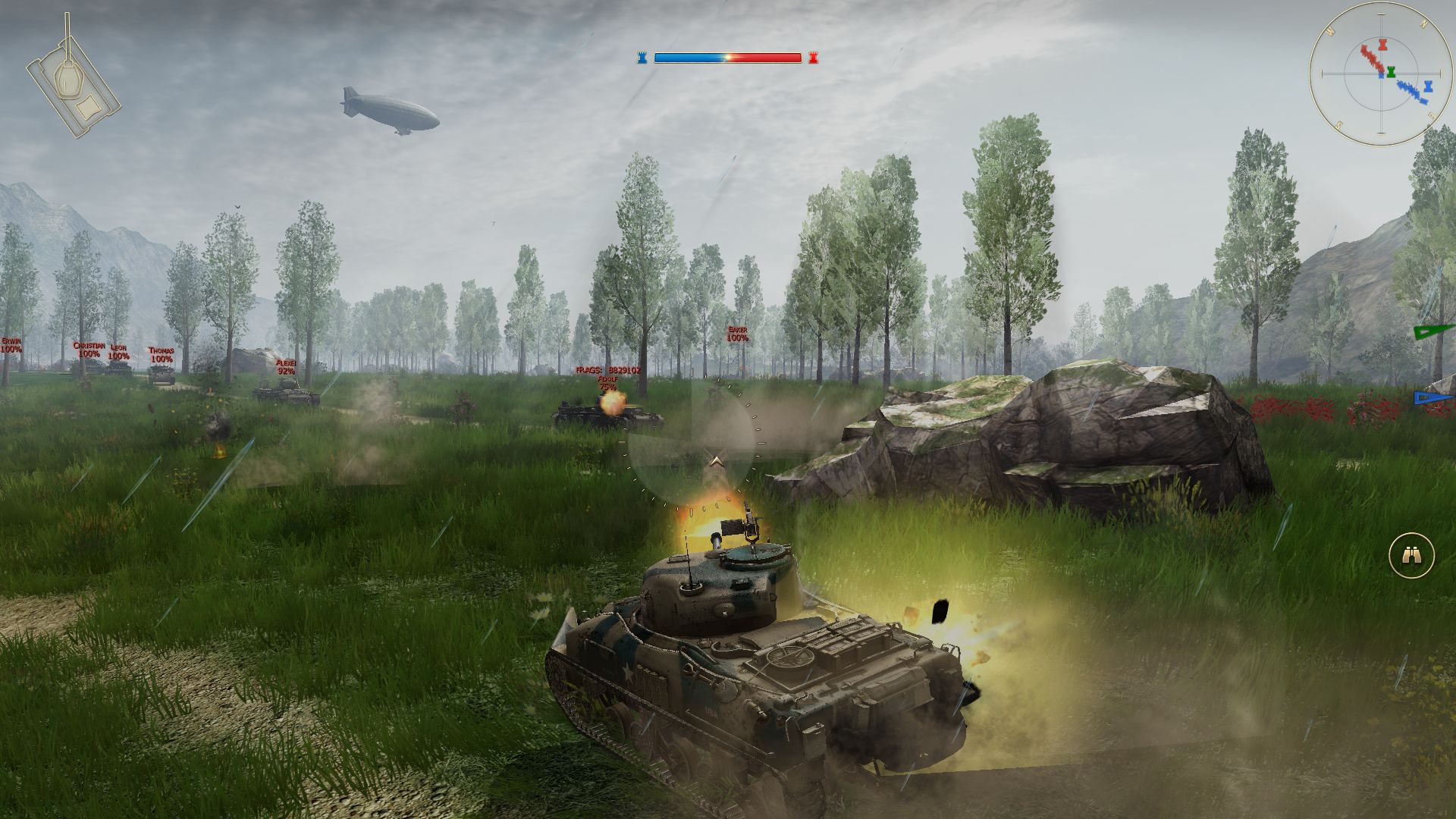 As the environments are fully interactive, you can always run over fences and trees or destroy buildings in order to clear an escape route. Similarly, a plume of smoke billowing in the distance from behind a building could be a sign of the enemy tanks regrouping. Falling trees will also give them away! 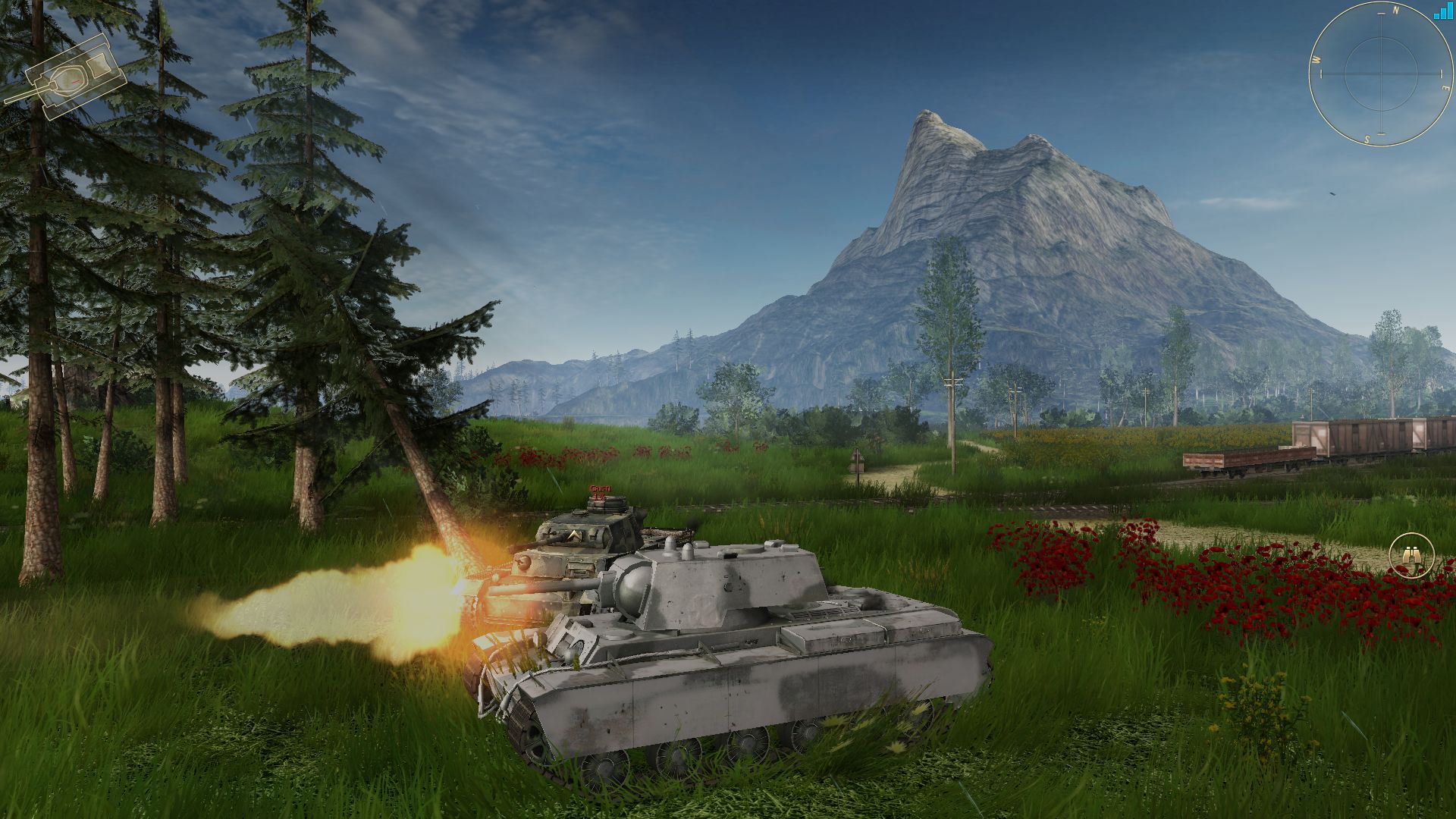 Although the game is optimized for the iPhone 5S, the iPad Air and Apple’s new A7 processor, the frame rate isn’t as smooth as you’d expect  (yes, they’re using OpenGL ES 3.0).

I understand there’s a lot going on with greater environmental detail and additional visual effects on A7 devices, but I kinda expected a tad smoother performance. I could be nit-picking here as many folks won’t necessarily be annoyed by the occasional stuttering.

Awkward controls
Those familiar with arcade games on iOS that tap the virtual joystick concept should feel right at home in Battle Supremacy. The virtual stick on the left controls your tank and the other one on the right pans the camera around. There’re also fire and scope icons, the latter indispensable when engaging enemy tanks from far away.

It’s nice that your gunner handles the aiming when you’re driving the tank. The scope mode of course offers greater accuracy, but also leaves your vehicle vulnerable to enemy fire. Of course, WWII tanks were not computerized: these things were bulky and suffered from slow reloading times – talk about sacrificing speed for destructive power!.

That’s why it’s definitely going to take some time getting used to the glacial movement speeds and slow turning times. That’s not saying there’s no energetic fighting in this game – there is – but with a strong tactical twist to it that sometimes feels like a game of chess. 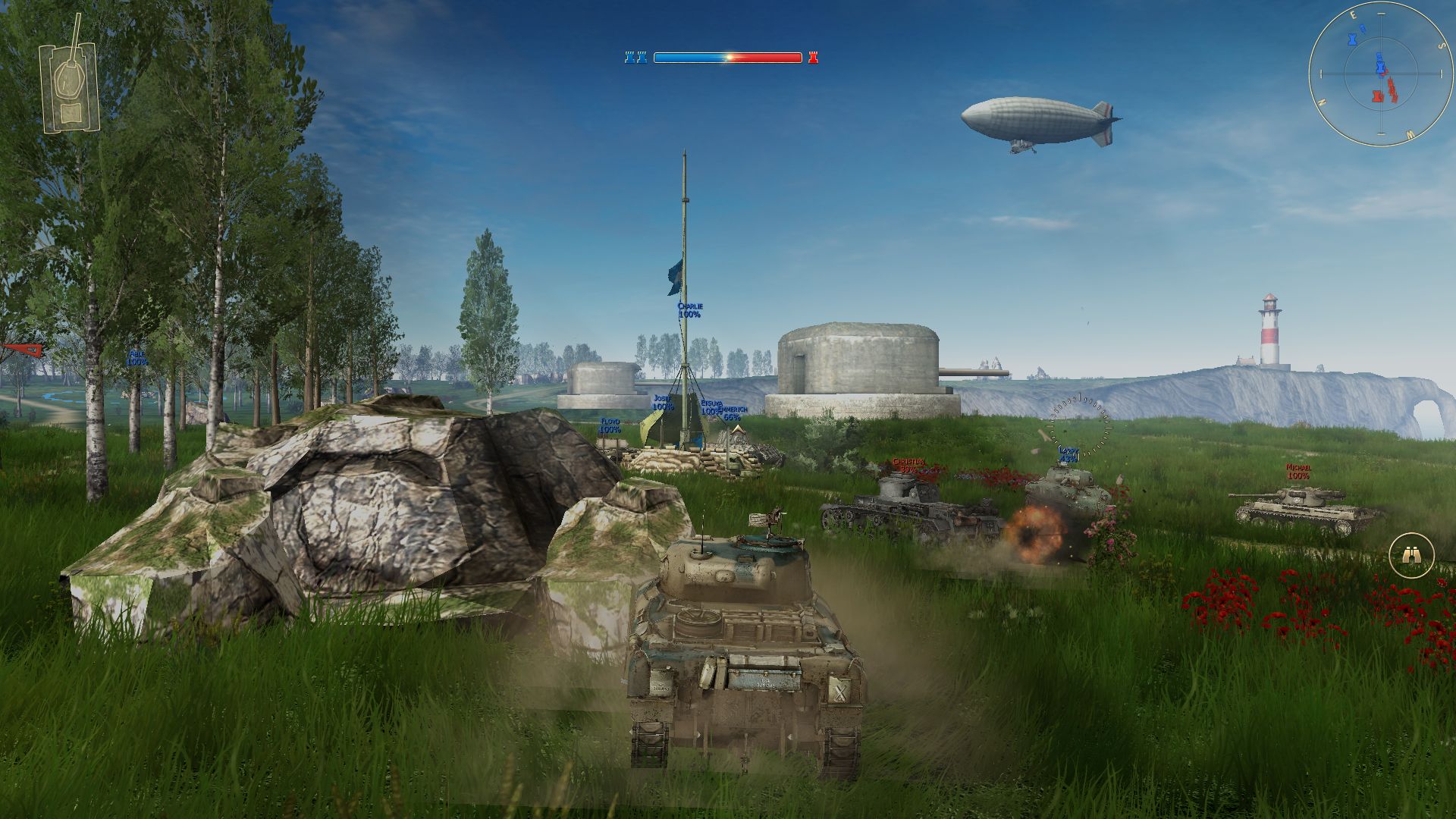 Put simply, Battle Supremacy is all about accurate representation of WWII tank warfare and gaining tactical advantage over the enemy. Attempt to shoot your way through the levels and you’ll find yourself outflanked and fried by the enemy forces in no time – you’ve been warned.

The bigger issue here is the relative inaccuracy and unresponsiveness of the controls, especially when aiming in the scope mode. Some tweaking would be much welcomed here, perhaps even additional settings to customize the controls to one’s liking.

Single player and multiplayer
About a dozen missions in the campaign mode stretch over France, Russia and the Pacific islands. I suspect some players may find them a tad dull and I can relate to that, but this is due to the game’s focus on tactical movement at the expense of mindless shooting.

Online multiplayer is perhaps the best aspect of Battle Supremacy. You’ve got your typical and atypical multiplayer modes, ranging from Team Death Match and Domination to King of the Hill and Game Center duels. 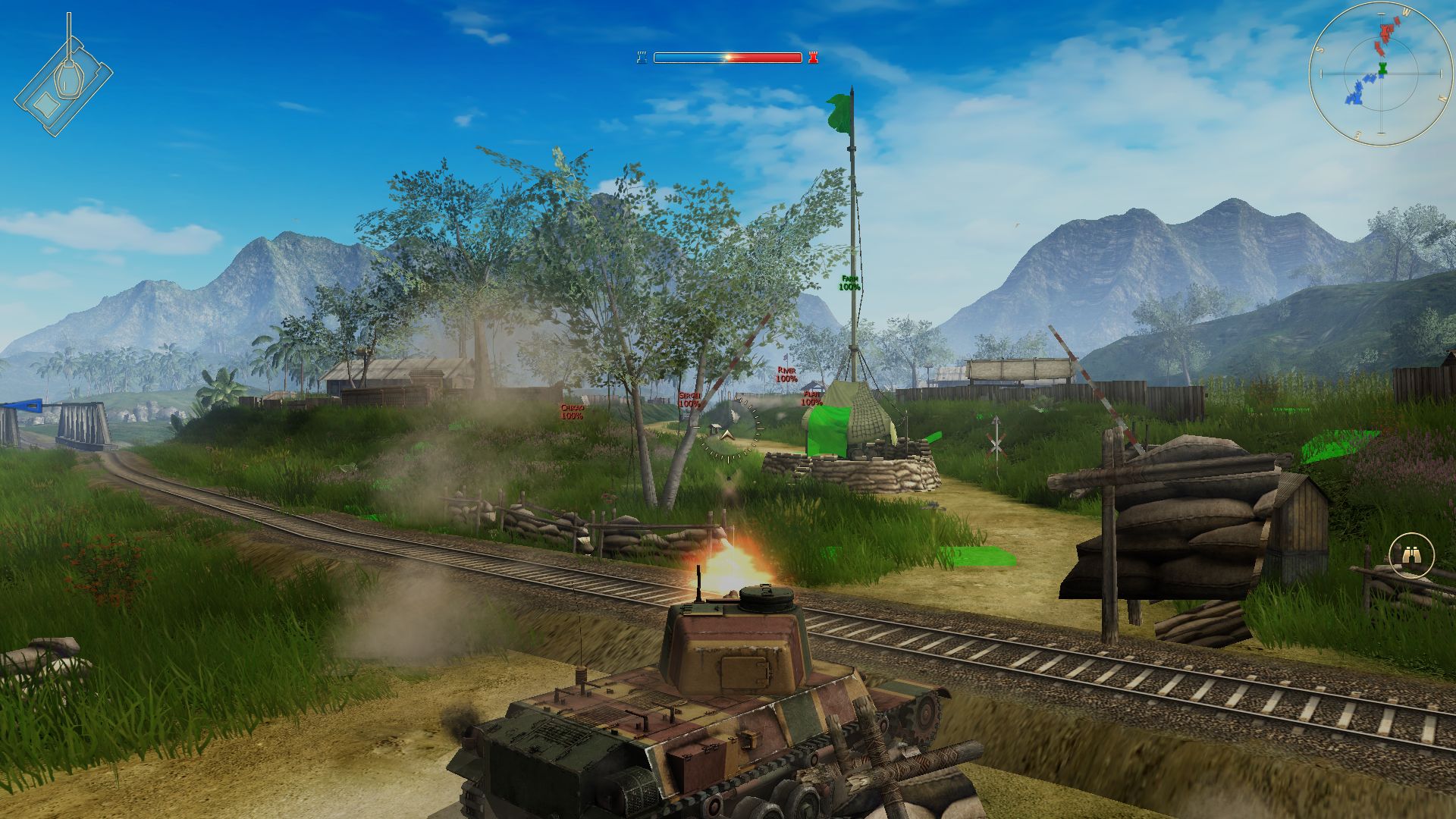 Multiplayer maps are huge and there’s always someone to team up with (five vs. five players max) as the servers seem to be under heavy load. For the most part, the online experience feels like a bit like Counter Strike, and that’s saying a lot.

Machines of war: tanks, planes, jeeps and boats
While the main focus of the game is tank-based warfare, every now and then Battle Supremacy will give you a chance to fly a fighter plane (it’ll be just like Sky Gamblers, all over again!), drive a jeep or get behind the wheels of light armor vehicles and boats.

The tanks are accurately represented and there are unlockable vehicles, upgrades and advances in rank and fight together with your brigade. 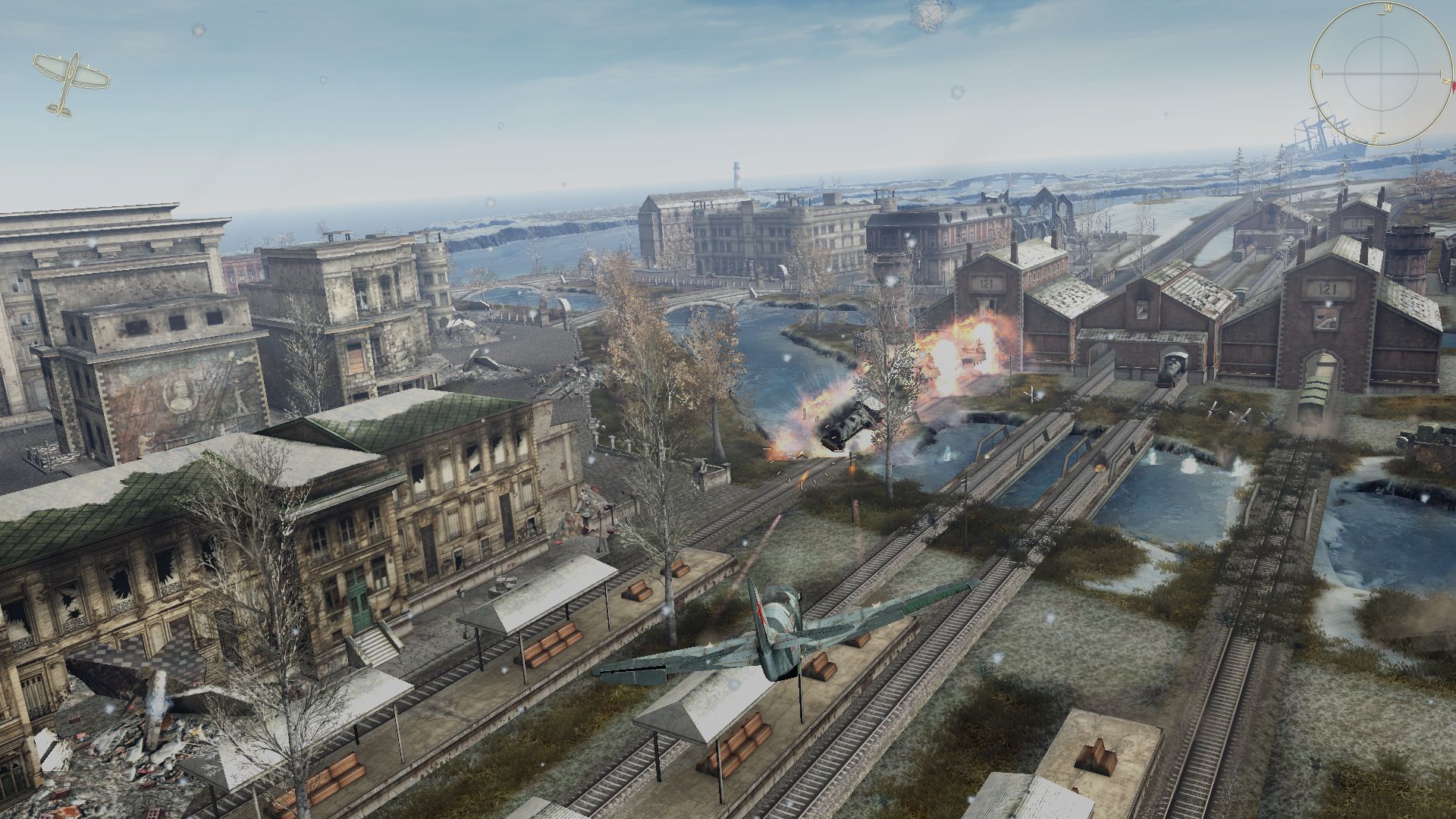 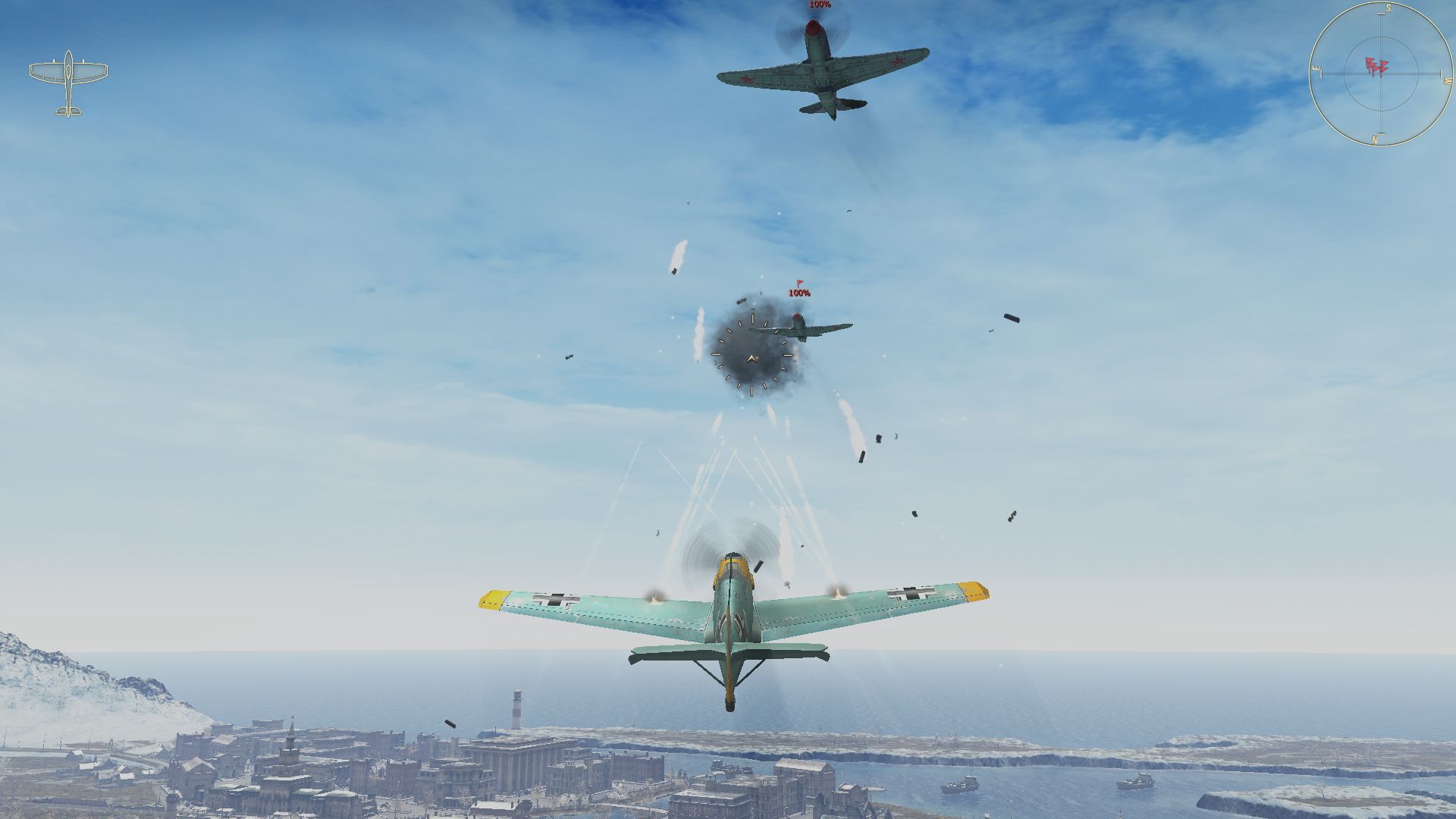 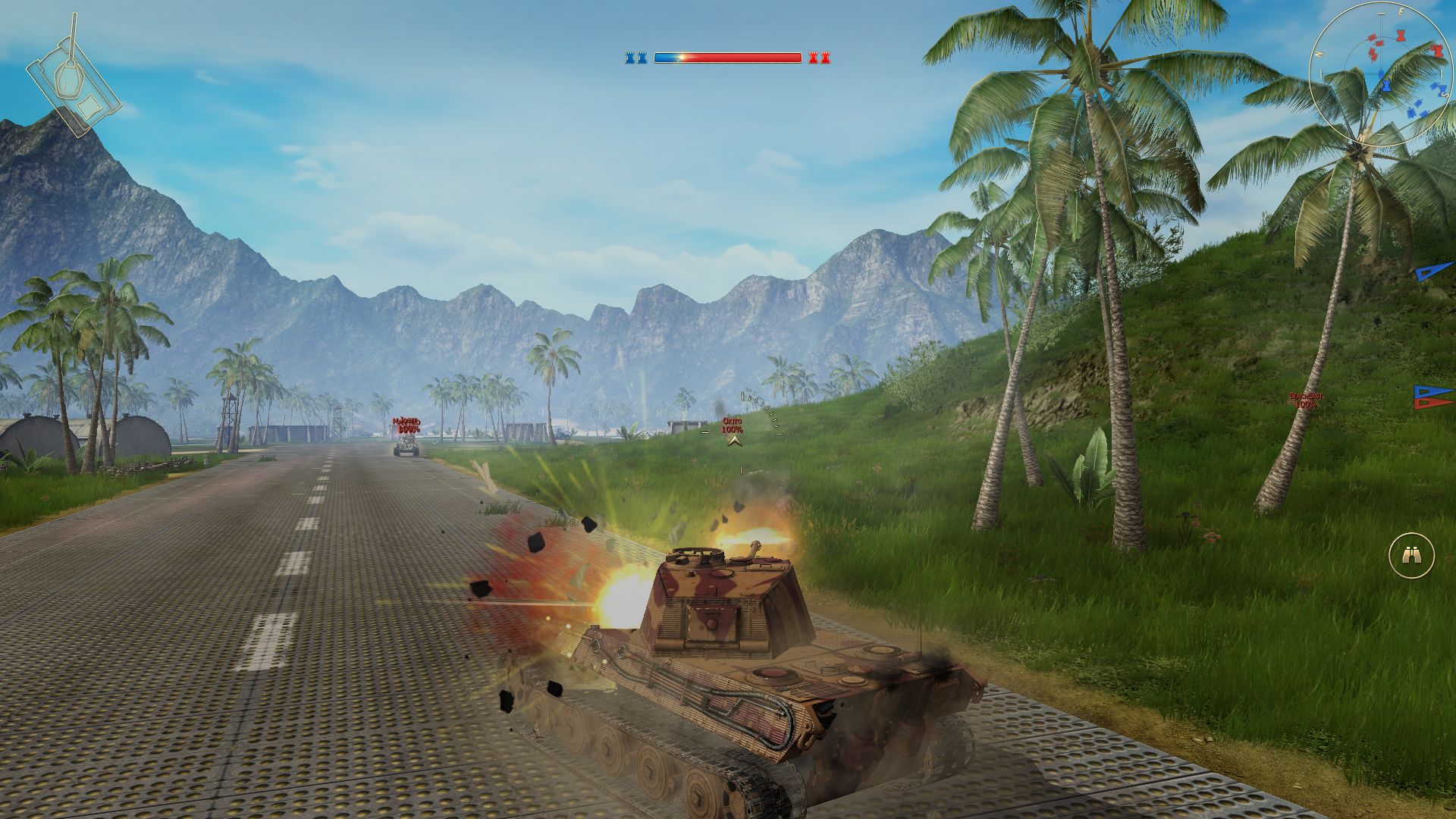 What you won’t find in this game is infantry.

Single player campaigns could have been made more interesting or varied, cut scenes should have been skippable and virtual controls need some work or at the very least getting used to.

The initial release crashed a lot on startup, requiring a cold restart. An update was issued yesterday to fix this. Should you still experience startup crashes, reboot your device to clean up memory and that should fix it.

Speaking of the controls, you can solve the issue of the somewhat clumsy controls in one fell swoop by using any MFi physical controller. Last but not least, the game supports iCloud saves across devices, Game Center leaderboards, achievements and friend challenges and AirPlay streaming. 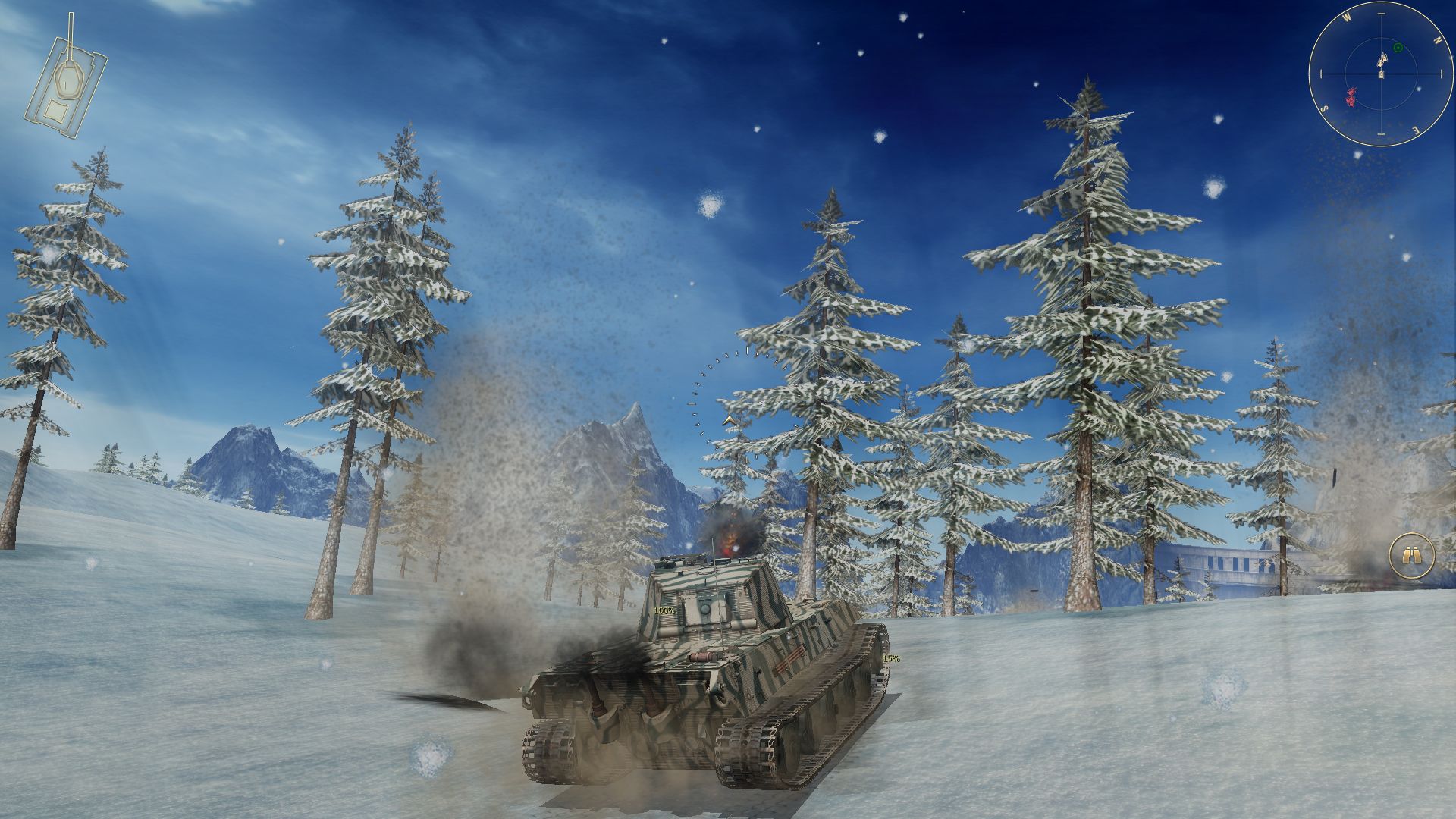 Overall, it’s a very nicely done package that – even though it doesn’t match the level of completeness of the Sky Gamblers series – is a reasonable value for money.

Fans of fast-paced shooters who thought this was yet another easy WWII shooter will want to pass. Those who prefer tactical thinking over action-packed shooting, and don’t mind the glacial movement speeds and long reloading times, will love Battle Supremacy.

In my personal opinion, the game strikes a delicate balance between strategizing, pure skirmishes and just blowing stuff up.

Put simply, it’s an atypical WWII tank shooter and that’s a good thing. And, I’d say that Battle Supremacy is arguably the most realistic tank battle game on mobile. As a bonus, there are no in-app purchase at all so you definitely get what you pay for. 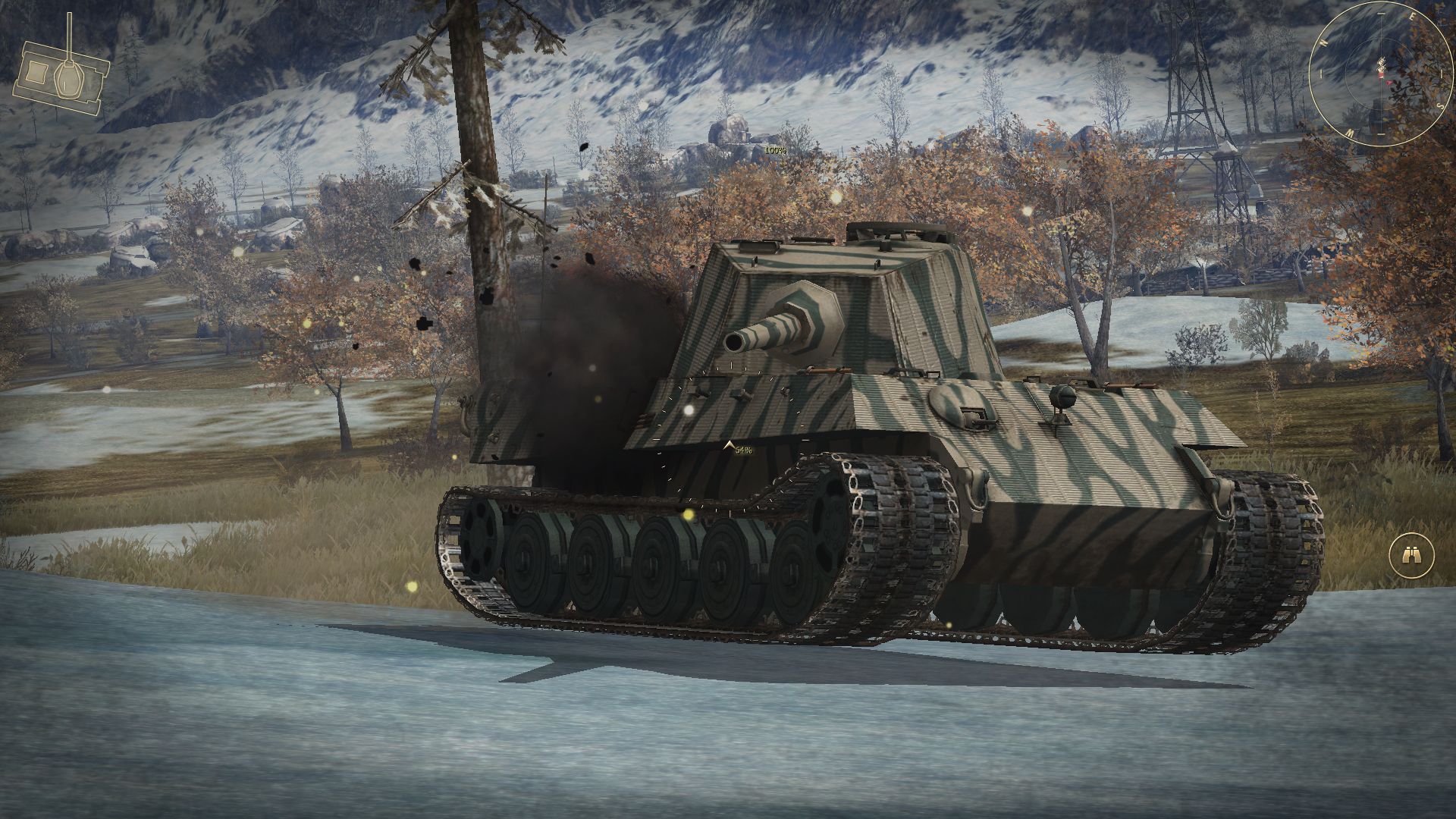 The download comes in at 429MB, it’s universal and requires iOS 7.0 or later.

To a lucky reader who read the review this far: redeem the following promo code in the App Store – NHRJERX9LHKJ – and start playing Battle Supremacy now (you’re welcome).

Don’t worry if you haven’t been quick enough: just keep an eye on @iDownloadBlog as we’ll be giving away additional Battle Supremacy promo codes throughout the day.

Would you agree with my assessment of Battle Supremacy?

Feel free to enrich the review by chiming in with your own thoughts down in the comments.