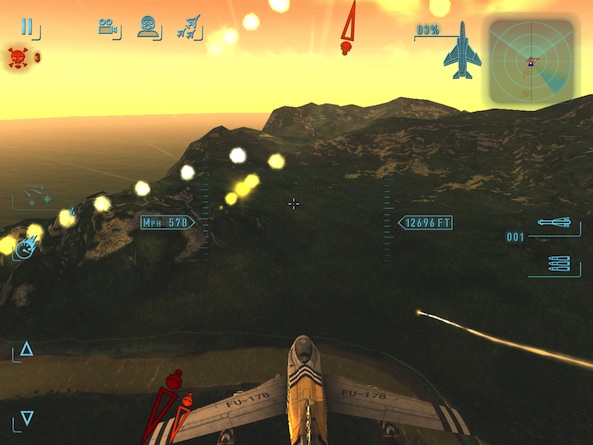 Sky Gamblers is a popular flight simulation series of arcade games that puts you in the cockpit of a fighter plane as you take down enemies in a variety of missions. It is best known for being a Mac based game, but the game’s creators have decided to launch an iOS version in tandem with the desktop app.

Sky Gamblers: Cold War is a universal app that follows up on Atypical Games’ award-winning Storm Raiders title. This time, you’ll be flying during an era that spans 50 years and multiple battles…

This game offers hyper-realistic imagery of actual landscapes around the world. View the hills, mountains, and forests of Vietnam, Korea, Afghanistan, and Siberia as you fight against the enemy in epic air battles.

You can select from different fighter planes in different eras, including two or three types from each generation and three different designations for each plane in the category.

The graphics are so good that I literally got sick to my stomach when my plane went into a tailspin. You can change the camera’s angle to six different views, including from below, behind, inside the cockpit, a wing shot, and first-person.

The controls can be either tilt or joystick controlled. If you are playing on the iPad, I recommend joystick controls. My arm started to get sore flinging it around during the craziness of the dogfight.

The screen shows you a detailed heads-up display of your controls, the enemies, and your companions. It will be important for new players to go through the entire tutorial to learn the controls, weapons, and how to perform special moves.

There are nine different modes for single player games. See how long you can last against waves of enemies in Survival Mode. Follow the story in Campaign mode. Play individual missions in Dogfights. Race against other pilots in Free-for-All. You can also play Capture the Flag, Team Deathmatch, and Defend the Base missions and try to stay alive in Last Man Standing.

If you need to work on your technique, test your skills in Free Flight where you can practice your movement and firing abilities without the distraction of others.

Connect with friends in Multiplayer mode through local Wi-Fi, online with groups of up to eight other players, connecting with random players using Game Center, or head-to-head with someone in the same room through local Wi-Fi or Bluetooth. 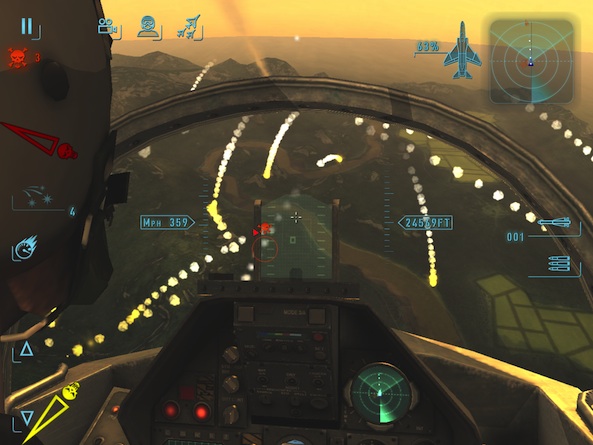 Holy poop. This game is amazing. Sometimes, it blows my mind that this level of graphics and detailed gameplay is available on a mobile device. When I was a kid, the only game you could play in your home was Pong.

Players take to the skies in a variety of different missions. For brevity’s sake, I’m going to describe gameplay of Campaign Mode using the joystick controls.

You will first see a small cinema clip of the beginning of the battle. This tells the story of why you are in the area fighting the particular enemy. Then, the fight is in your hands.

You will immediately be surrounded by a group of enemy fighters. Your goal is to destroy them all. To attack, get an enemy in front of you. This is much harder than you might think. You do have tail flares that you can launch if an enemy has a lock on you, but those weapons won’t destroy your opponent. You must get them in your sights.

Your plane will have a couple of different weapons options. You will have the main weapon, which shoots basic machine gun style bullets at the enemy. You will also have a heat-seeking missile that will lock on to your target and engage it, no matter where it flies. On some levels, you will have a third weapon that sends out a cluster of missiles to attack a group of enemies.

To hit an enemy, get him in your crosshairs. When your HUD shows an enemy in target, fire the main weapon. Be careful how long you attack with your main weapon. It will overheat. When your missile locks onto the enemy plane, your white crosshairs will turn yellow, letting you know that it is time to shoot. You will get two missiles at a time. They regenerate after about 15 seconds and you will get two more. You don’t run out of missiles, but they do take a little longer to load than your main weapon.

You can set your plane to autopilot, which doesn’t make it any easier to shoot down the enemy, but it does seem to keep you from getting hit as much if you are still new to the game. Of course, veterans of the Sky Gamblers series won’t need such “cheats” (I can say that because I am a noob who uses Autopilot a lot).

You will also have a group of companions with you in single-player mode. These extra dogfighters will do their best to help you take care of the enemy, but the nitty-gritty is up to you.

Be prepared for a very large download. Even though the game is only 751 MB, it will take about twice that much to download it. If you buy the game and are told the file is too big, download it on your desktop or laptop first. Then sync your device with iTunes. 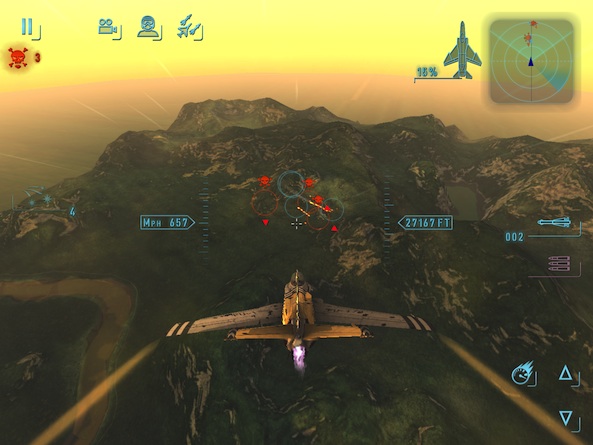 I don’t’ think I’ve ever seen a game that looked this good on the iPad. I was surprised at how disorienting it was for me to watch the plane spin out of control while the images rotated between earth and sky over and over again. The graphics are great.

This game is also AirPlay enabled so you can watch the action take place on your big screen using Apple TV and AirPlay Mirroring. This is absolutely console-quality gaming at its finest.

For gamers who have been making a go of it with the Sky Gambler series for years, the controls and fast-paced game play are probably easy to get used to. But for me, the game proved to be very difficult, right from the first level of the first campaign. I was constantly twisting and turning and diving to try to find the nearest enemy. I wish the beginner mode were just a little bit easier.

Sky Gamblers: Cold War costs $4.99, which is the same price as the Mac version and the most recent Storm Raiders release. So, the price is completely comparable to others in the genre and very reasonable for the level of gameplay you get.

Fans of flight simulation arcade games will enjoy how fun and fast-paced this is. There is a wide variety of different modes to keep you coming back again and again. Since you can mirror it to your television set using Apple TV and AirPlay, it is like playing a console game using your iPhone or iPad. If you like dogfighting flying games, you won’t want to pass this one up. Download it in the App Store today.