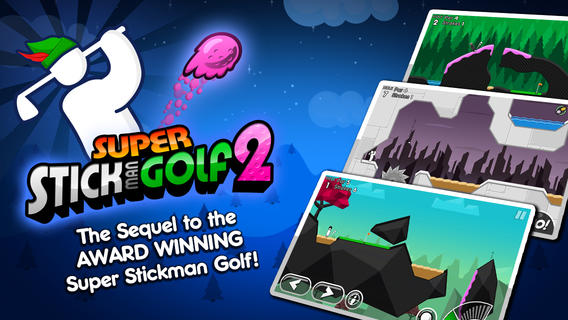 Super Stickman Golf 2 by Noodlecake Games, the sequel to the award-winning Super Stickman Gold, arrived in the App Store back in March of last year and quickly rose up the charts due to its addictiveness, entertainment value and novel concepts.

It sports a ton of different modes and levels, characters that can be customized, varied courses to choose from, two multiplayer modes, all spiced up with compelling puzzles and nicely done crisp Retina graphics.

Super Stickman Golf 2 combines the best of golf games and puzzlers into one sweet package and it’s now free, but only for today so grab it now while it’s hot for a cool $3 saving…

As of last December, the game saw over five million downloads on iOS and Android combined. Celebrating the milestone, developers have added a new tour with a course based on indie game Super Meat Boy.

And just yesterday, they’ve also added a crazy new anti-gravity space course and three other courses, new ball effects and the ability to chat with opponents in turn-based games.

All told, the game features 30 dynamic mini golf courses, 70 achievements, two different multiplayer modes, iCloud and Game Center support, and a bunch of power-ups and customizable characters, among other features.

If the current crop of new game releases on the App Store are kinda meh, you really need to check out this refreshing take on golf, you won’t regret it.

With that in mind, do yourself a favor and go download Super Stickman Golf 2 now from the App Store, free today only (you’re welcome).