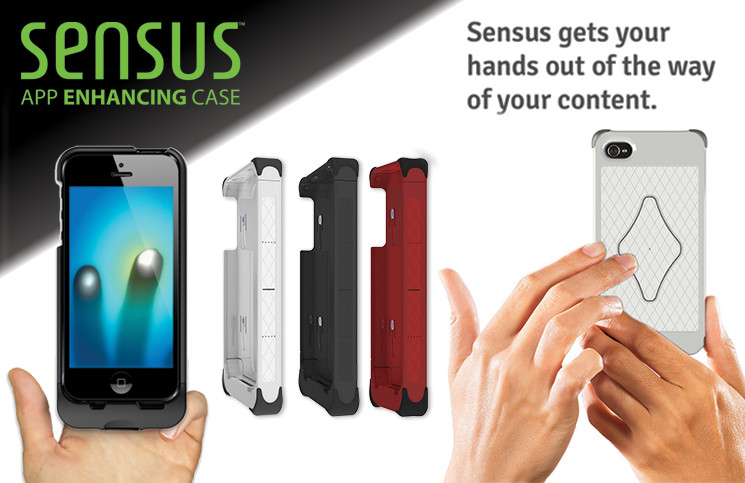 There’s been no shortage of iPhone cases trying to think outside the box at CES this year. We’ve seen cases from OtterBox that are both thin and protective, a backup battery and storage case from Mophie, and now we have a new one to share.

This is the Sensus case, from Canopy, and its big standout feature is that it adds pressure-sensing strips to the sides and back of any iPhone 5 or 5s. These strips essentially add an extra method of input for navigating apps or playing games…

If this all looks and sounds familiar, that’s because Canopy brought a similar case with them for the iPhone 4/4s to CES last year. Following the release of the iPhone 5, however, the company scrapped that project and started on this new case.

“Canopy (canopyco.com), the company behind Sensus™ (getsensus.com) — the world’s first mobile case that expands the user interface from the front screen to the sides and entire back of the iPhone® through variable pressure technology — announced today it has begun shipping dev kits to approved developers.

Sensus is a protective case first. It has touch sensors built in that allow users to interact with apps from the back and sides of their mobile device. New “variable pressure” technology detects that a user is pushing, and to what degree of force they are pushing — technology that adds a whole new variable and dimension to interaction with apps. Sensus expands possibilities in accessibility, gaming, productivity tools, maps, and more — the entire ecosystem of mobile applications.”

And here’s a hands-on video from The Verge:

While there are definitely some interesting ideas here, the Sensus faces the same major hurdle that other iOS input peripherals face: app support. Canopy has a working SDK, and is courting developers, but only time will tell how many latch on.

The development kit is available now, and the company plans to get the public version of the Sensus to market by the end of the year. Unfortunately, it’ll be priced around that magical $100 mark that so many iOS accessory-makers are settling on.

So, what do you think of the Senus?