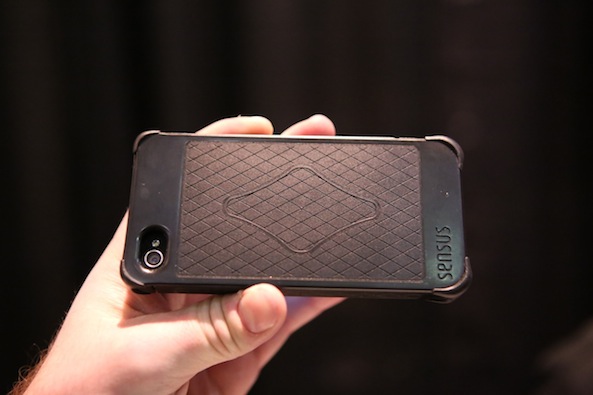 As CES marches on, it’s getting tougher and tougher to keep up with all of the different iOS accessory announcements. But we’re trying. Earlier today we saw the Hapifork from Hapilabs, and Griffin’s PowerDock, and now we’ve got an interesting case to show you.

The Sensus iPhone case, from Canopy, is very unique in that it has a 10-point touch sensor across the back, and built into the sides of it. This enables users to interact with applications and perform other tasks without actually touching the handset’s display…

“But it’s a touch screen device. That’s what you do is touch the screen.” Yes, but there are several ways this could benefit users. Think one-handed operation. Or better yet, think gaming. With controls on the back, your fingers wouldn’t block the on-screen action.

Actually, Canopy’s intentions for the case are much more noble. The Sensus comes with apps that are designed for the visually impaired, along with Braille entry on its touch panels. But the firm has also released a development kit for folks who want to build for it.

The case itself is a bit thicker than average, and is constructed from durable polycarbonate with rubber corners to protect the iPhone from drops and other mishaps. It has a built-in processor that monitors touch input, and it is powered via the iPhone’s charging port.

Unfortunately, the case is only currently available for the iPhone 4/4S, but the company is working on an iPhone 5 model. If you’re interested, Canopy’s Sensus case will be available during the Summer of 2013, and run you somewhere between $59 and $99.

What do you think of the Sensus case?