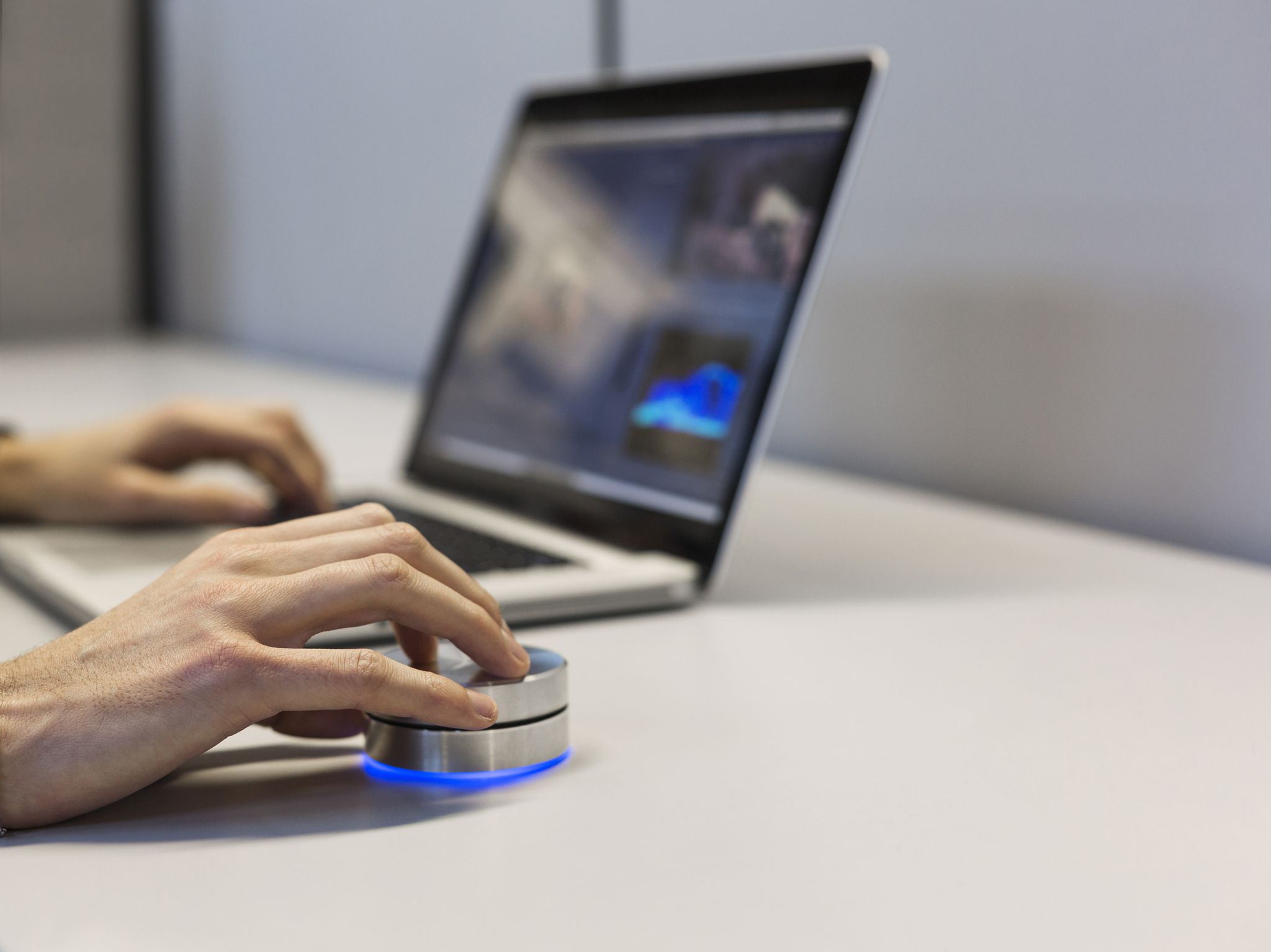 Our coverage of the Consumer Electronics Show 2014 continues with a slew of new product announcements by the accessory maker Griffin. The company has shown off a wireless variant of its iconic PowerMate knob, the first-ever iPhone protective case with storage for Square’s credit card reader, a multitrack version of the StudioConnect iPad music box and a brand new line of iPad protective cases, including a Papernomad iPad Air case, to name a few.

The Nashville, Tennessee based company has expanded its Kazoo-branded lineup with a matching iPad mini case, a stylus and a wall charger featuring fun animal graphics. There are also new app-controlled car and helicopter toys to check out, along with a range of iDevice cases in a variety of bold prints and colors to accent any style.

The monster breakdown is right below the fold…

PowerMate Bluetooth
Griffin’s newly launched PowerMate Bluetooth clickable knob, pictured above, does away with the cable to instead connect to your Mac via Bluetooth 4.0. Like before, it still features brushed aluminum finish which perfectly compliments your Mac.

The programmable gadget allows you to assign various keystrokes in apps so you can streamline tasks. Its wheel lends itself nicely to scrolling through long documents and is the perfect companion product in audio applications. 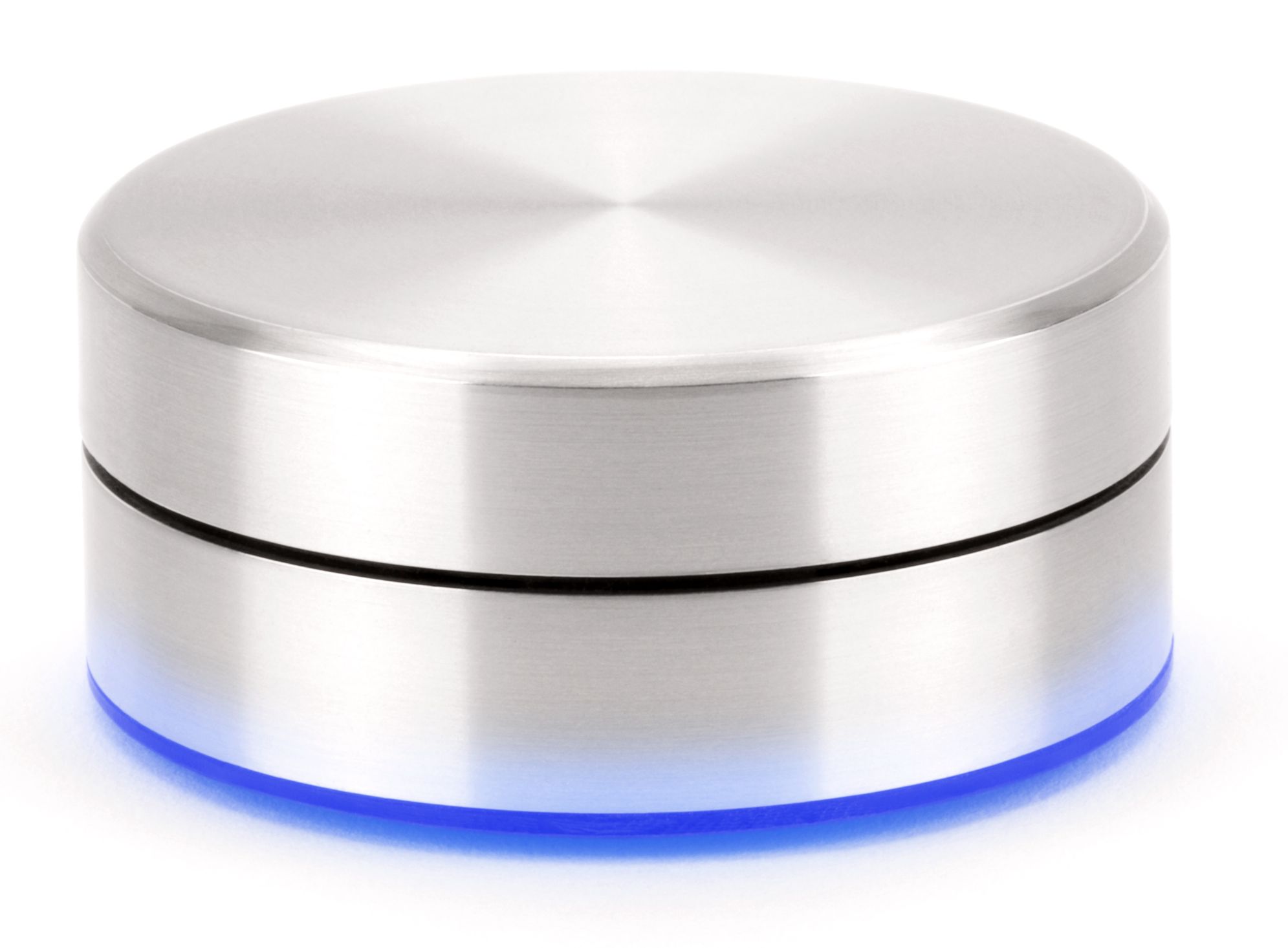 Moreover, it doubles as a volume knob and mute button and comes with handy iMovie and GarageBand presets. The pulsing LED can be controlled to provide system status and multiple PowerMates can be paired via Bluetooth for a truly versatile control system. The accessory will be available summer 2014 for $59.99. 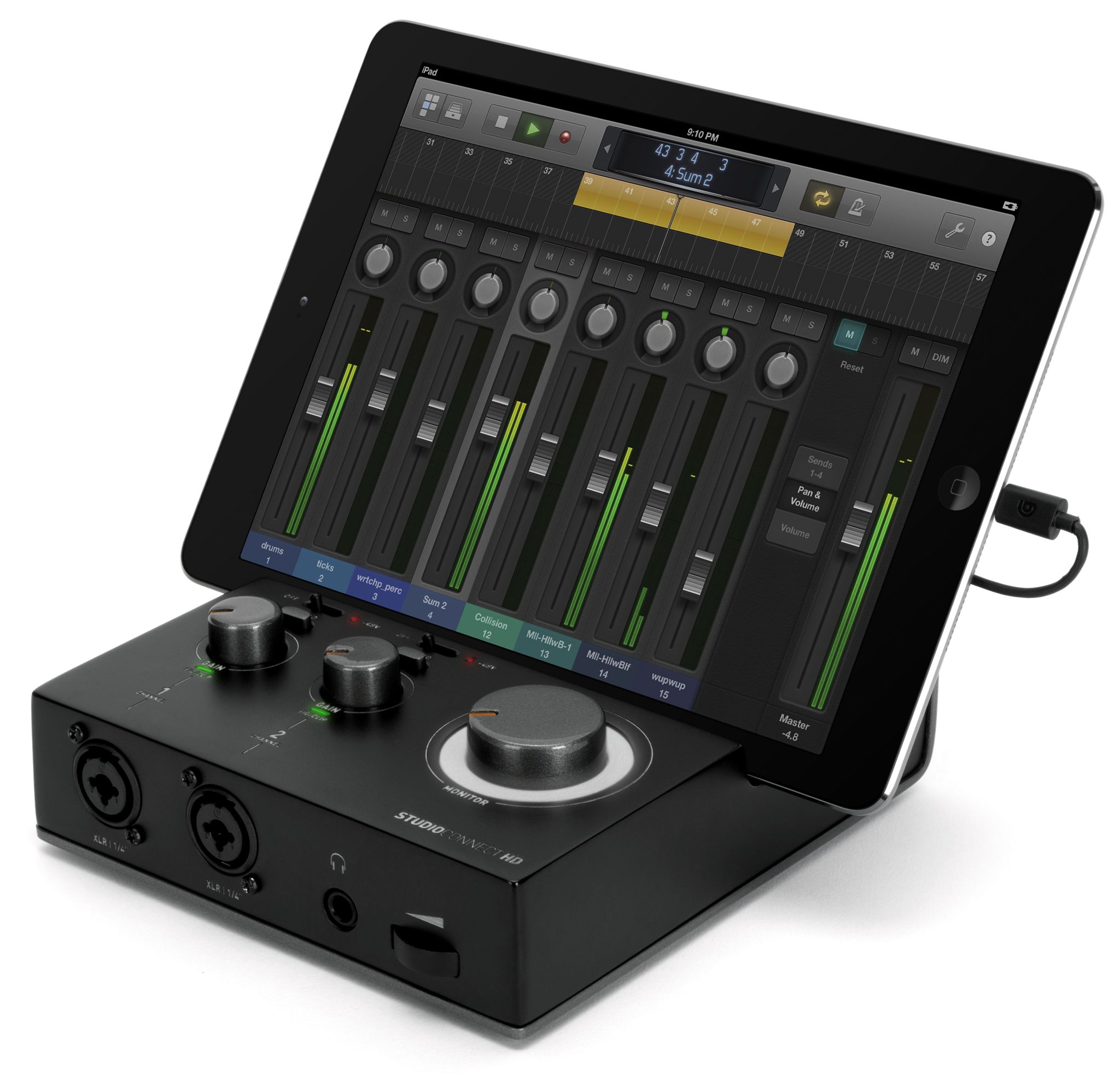 Compatible with both Lightning and 30-pin iPad models, the StudioConnect HD ships with a Type A USB cable for connecting to a Mac and is set to land in fall 2014.

Guitar SideKick
Aspiring and adept guitar players alike will appreciate the new Guitar SideKick, a tiny clamp designed to easily fit in a pocket or case. You will affix it to the guitar’s headstock at the end of the neck to mount your iPhone on. Aimed at fretted instrument players, the $19.99 accessory provides an at-a-glance overview of your music lessons and tutorials, as well as tablature and chord charts. 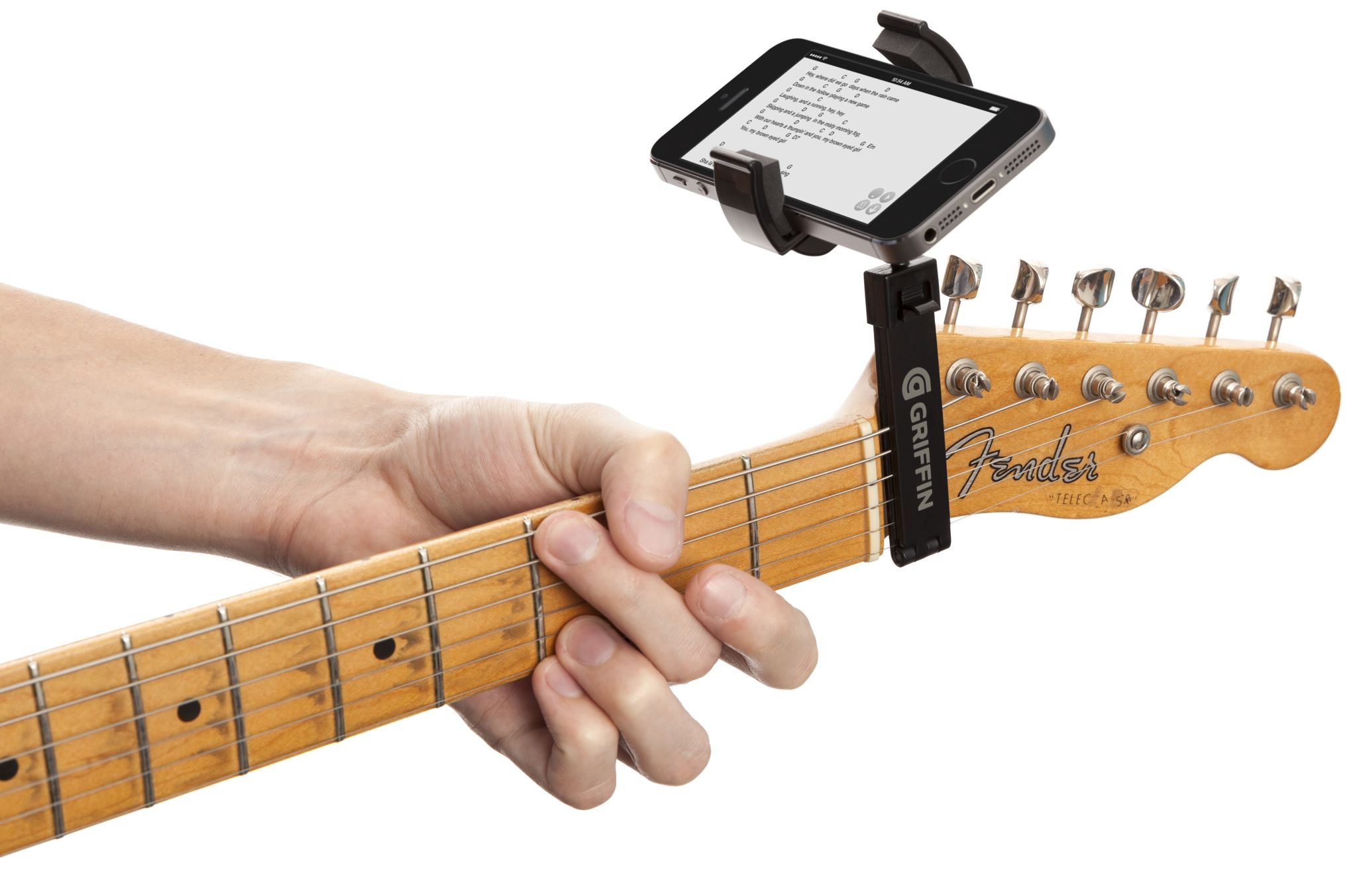 A special app is available to tune your instrument and record as you play (Griffin says the SideKick has no effect on tuning or playability). The Guitar Sidekick will be available March 2014.

Merchant Case + Square Reader
Another interesting new accessory is born out of collaboration between Griffin and Square, Twitter co-founder Jack Dorsey’s mobile payment startup. Square already has a number of hardware and software products for Apple devices, the Square Reader being arguably the most popular. And now, Griffin has produced a protective iPhone 5/5s case which integrates with Square’s credit card reader. 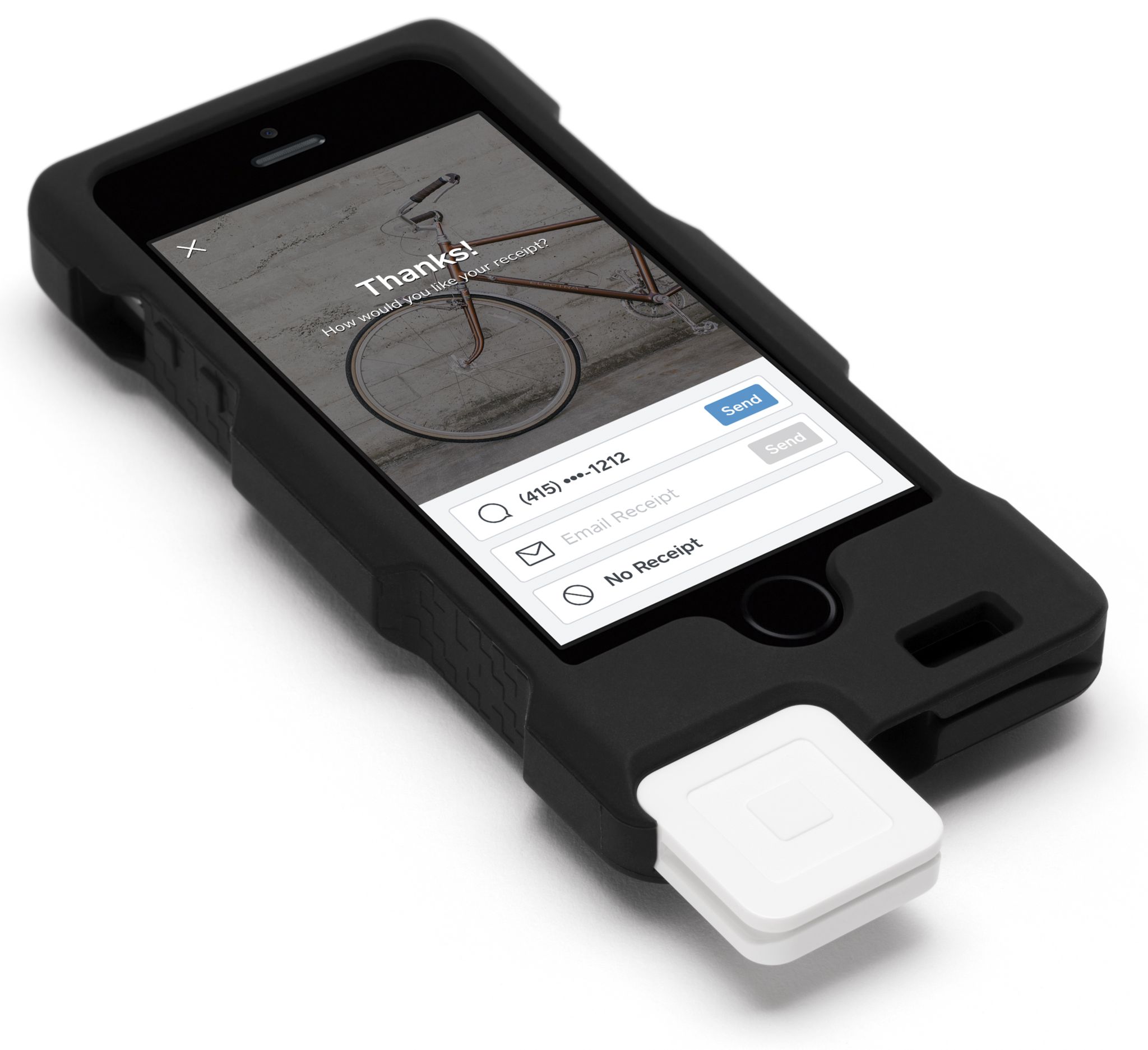 The $19.99 custom-molded silicon case secures your Square Reader when connected while eliminating swivel and excess strain on your iPhone’s headphone jack. As the image attests, a groove in the bottom aligns perfectly with Square’s dongle.

You can also detach and store your Square Reader in the back of the case when not in use. The case works with Square’s Register app and is available now, with current orders shipping within two weeks. 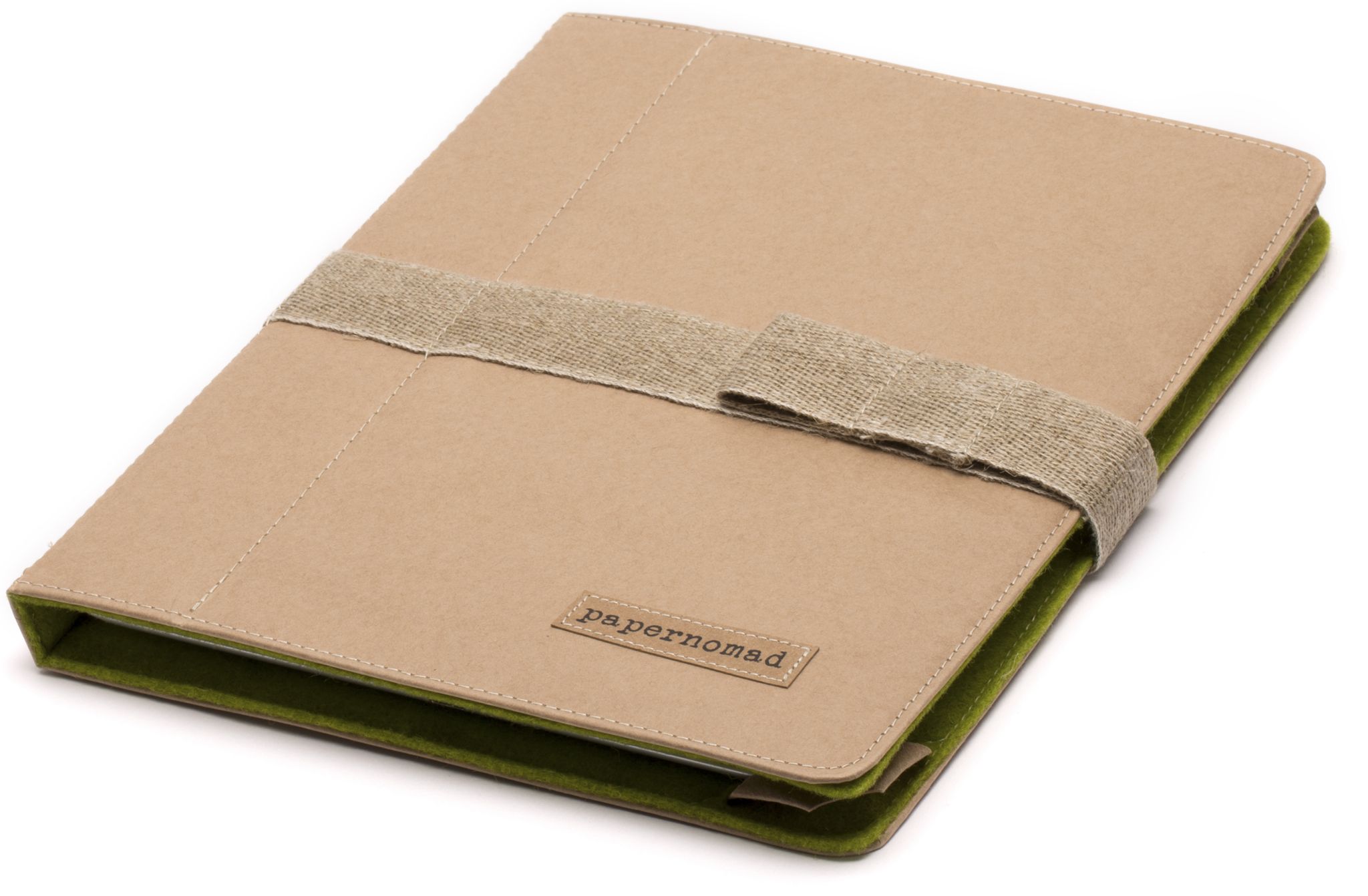 Griffin’s Papernomad collection of cases are environment-friendly and can of course be drawn on with pencils, pens and paints for the ultimate personalization. The Tootsie Folio for iPad Air will be available March 2014.

KaZoo Stylus Write
The $19.99 KaZoo Stylus Write could be mistaken for a toy because of its playful looks, but this is actually a highly sensitive stylus allowing you to sketch and tap on any touchscreen surface. Its soft tip prevents scratches and smudges on the screen and there are four designs available: a monkey, turtle, penguin and elephant. The styluses are available now and additional animal-themed designs will hit retail in March. 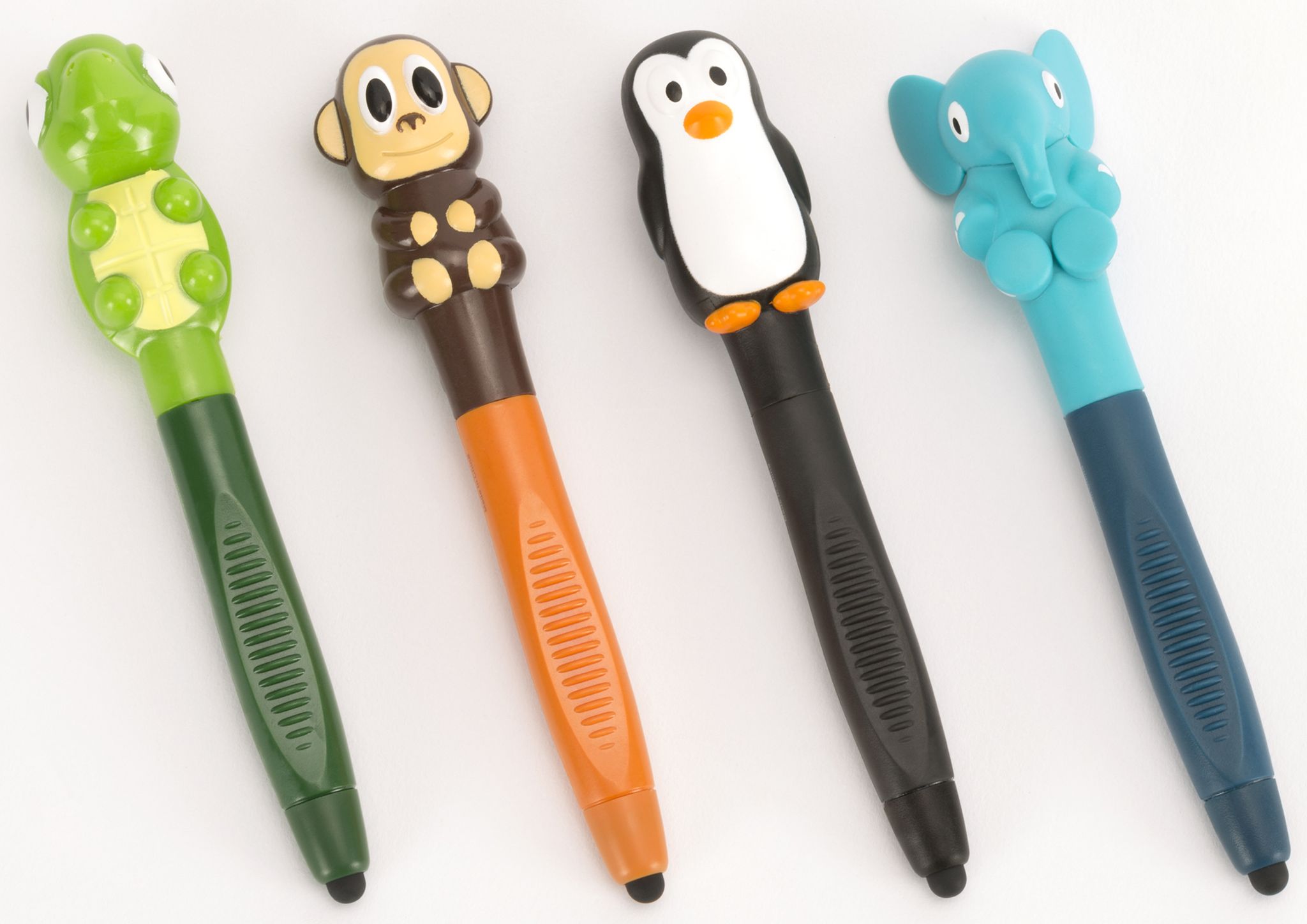 KaZoo Elephant Wall Charger
Another addition to Griffin’s fun KaZoo lineup, this $29.99 Elephant Wall Charger provides ten watts of power – enough to power your iPad Air or any iPhone model featuring Lightning connector. It’s just adorable so kids should fall in love with it immediately. The charger works in any AC outlet from 100 to 240 volts and will be available this March. 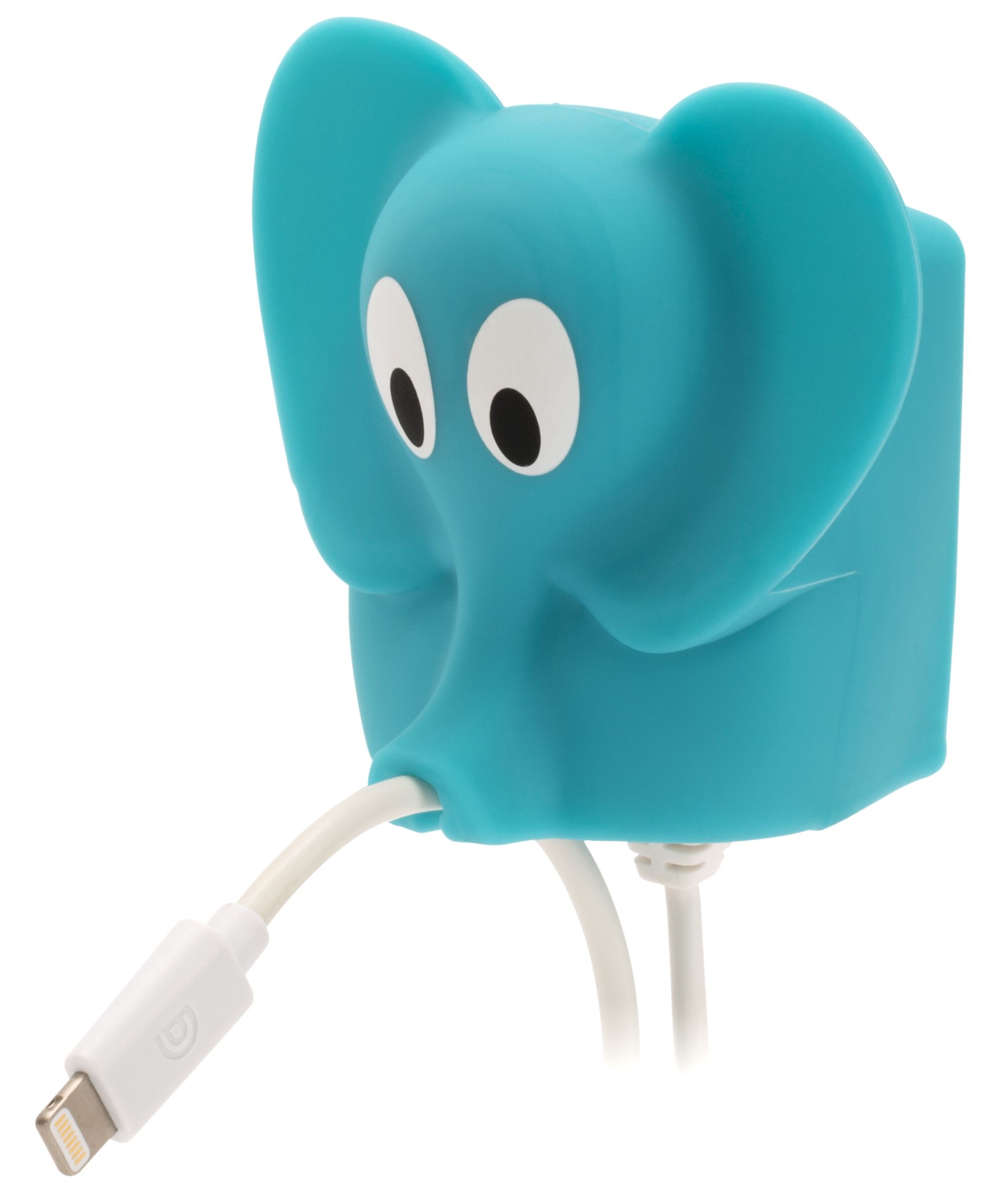 This soft silicone iPad mini case for kids comes with various zoo animal-themed prints and features a hollowed-out feet double to store your KaZoo styluses. It can stand upright on its “feet” for hands-free operation, for example to enjoy your media. The cases are available now for $39.99, available in giraffe, panda and fox prints.

You can either race against the clock or challenge your friends for a virtual carnage, with points earned for reducing your friend’s speed, tampering with another car’s controls and flipping their steering wheel. 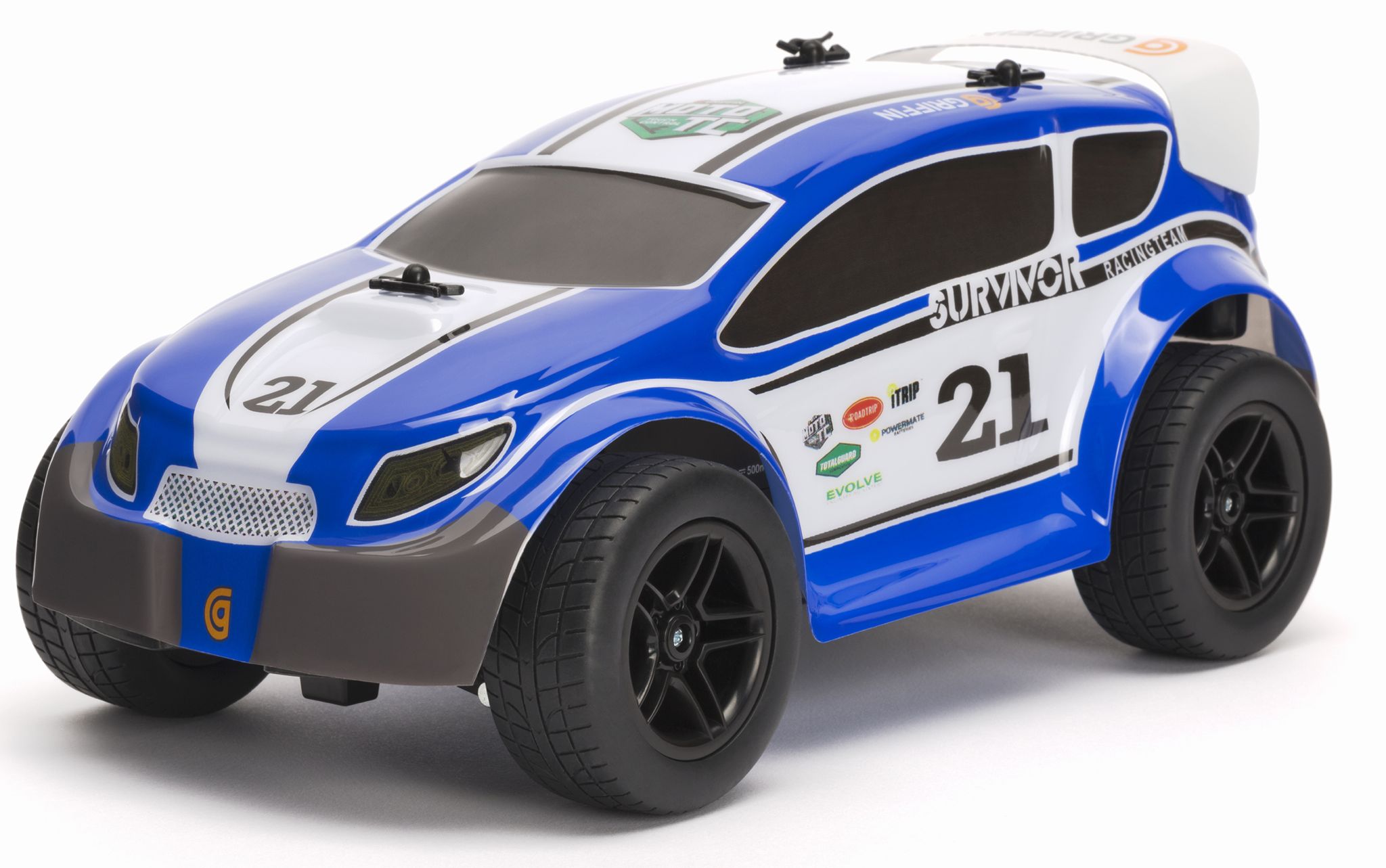 The companion app is pretty clever, too. There are bonuses to repair virtual damage or add protective armor as the software will detect bumps and crashes to change the way the car handles for a more realistic gameplay. The toy normally retails for $99.99, but Griffin is making it available with special CES show pricing for $49.99.

Helo TC Copter
You may not be aware of it, but Griffin’s been making iOS-controlled helicopters since 2011. Their latest Helo TC Copter, an improved version of the original twin-rotored Helo TC toy, works with any iOS 6 device the supports power-sipping Bluetooth 4.0 technology.

I’m loving that it has a Record & Recall feature to record and store up to three flight paths. With this capability, I could record a route among my living room and invite some friends over to impress them with how the chopper automagically avoids obstacles. 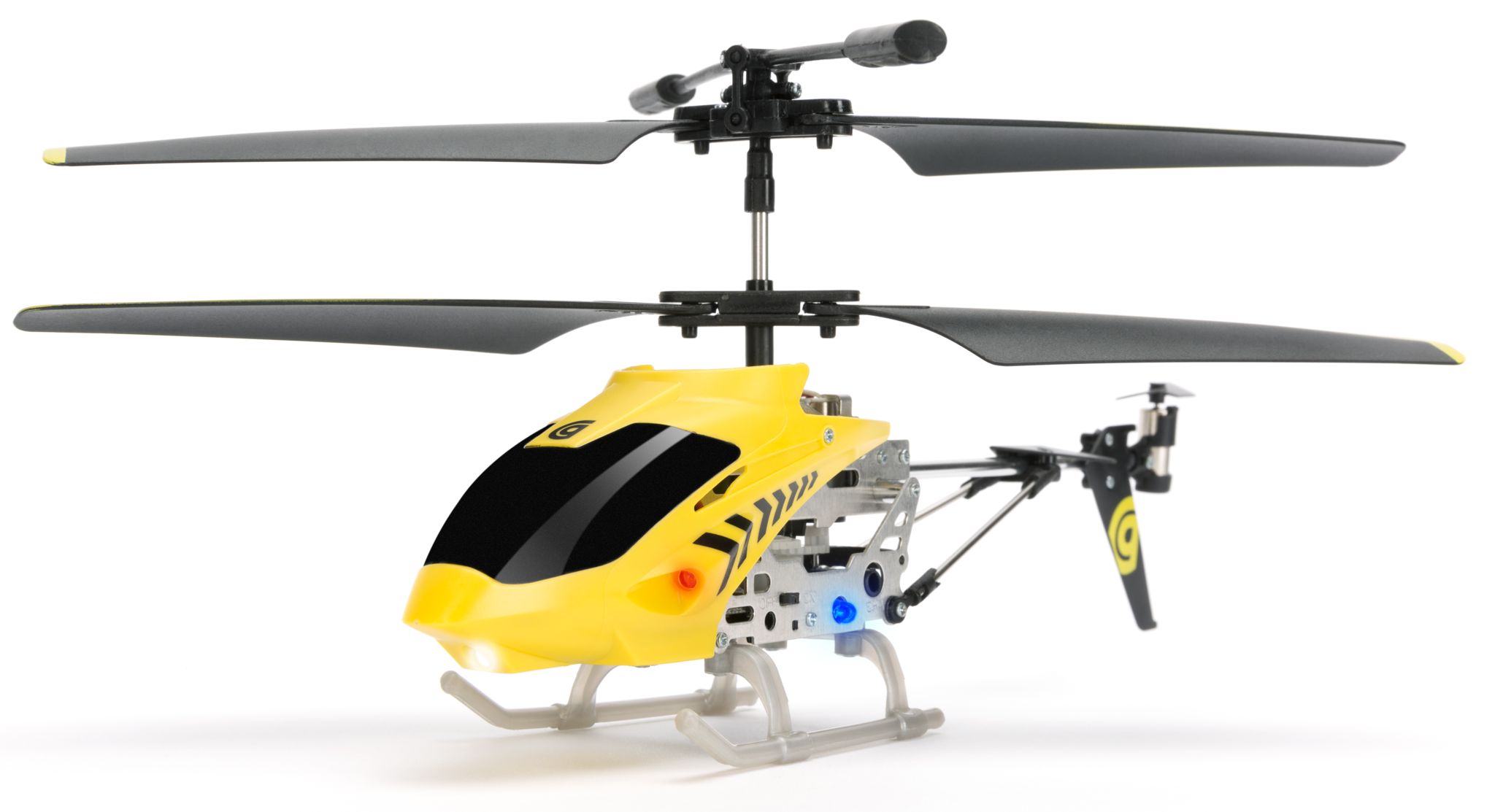 Another nice goodie: an Auto- Land feature, bringing the chopper down safely with a single tap. Using the free companion app, you can fly the chopper via touch controls or by tilting your device in any direction to move it forward, back and side to side.

Other products on display include Griffin’s Spring 2014 fashion collection of cases, styluses and screen care kits for Apple and Android devices. These include the refreshed Identity case collection, Journal folios, In the Jungle cases with playful animal prints, rhinestone-bedazzled Karats cases, Midtown Wallet cases and fresh new zebra and polka dot Survivor designs, among others.

MultiDock
Announced last September, the second-generation MultiDock charging station can charge and sync up to ten iPhone, iPod touch or iPad devices simultaneously. It’s both lighter and more attractive than its predecessor and is now compatible with several smartphone and tablet models. 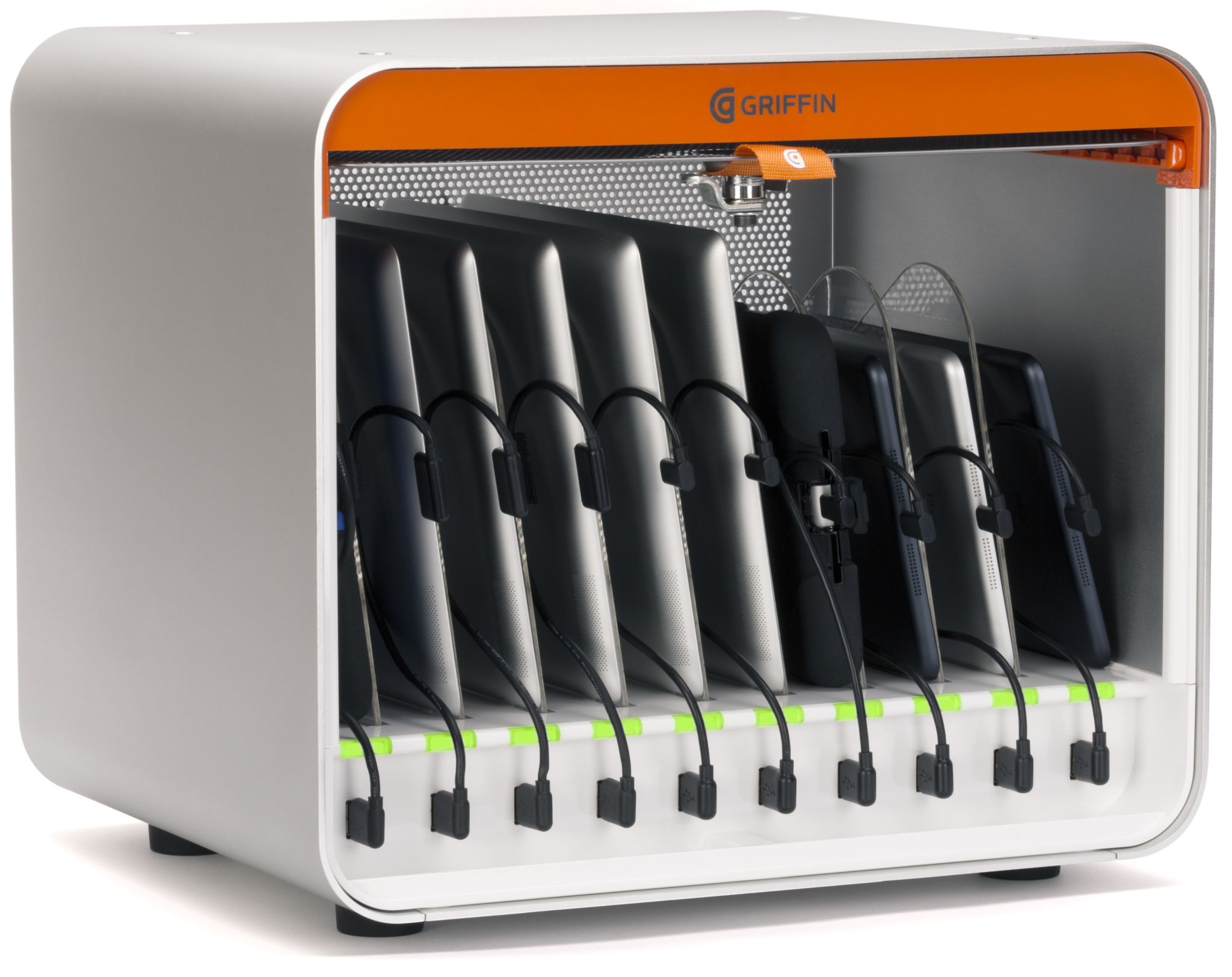 The charging dock comes in two configurations: a single ten-bay unit and a stacked 30-bay unit capable of charging up to a whopping sixty devices at once, complete with smooth rolling wheels, a handle and a lockable laptop tray.

Last but not least, Griffin invited London-born and Los Angeles-based street artist DiscoTeck to their booth to create an oversized mural on a wall constructed entirely of a bunch of Papernomad cases.

Check out the art installation below. 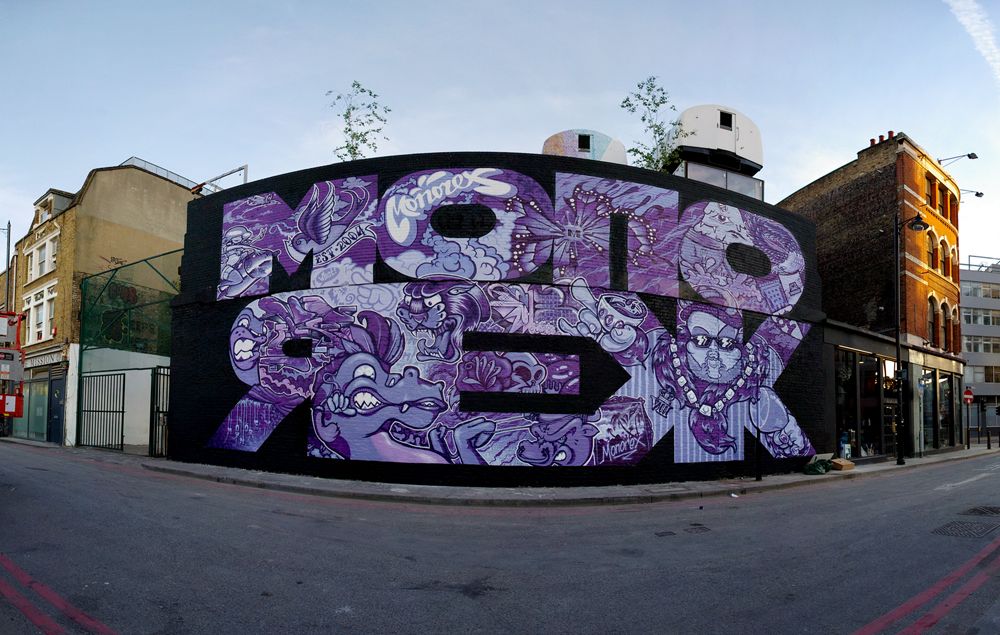 Griffin has a special CES 2014 page on its website so check it out for detailed information on everything they announced at the show today.

iDownloadBlog is providing continuous coverage of CES 2014 announcements that are relevant to the Apple community, as they happen, so make sure to check back often with us as we post new stuff.