FlipSwitch is a framework for adding quick toggles to apps and tweaks. We explained what the framework does and how it works in this post. In fact, FlipControlCenter, a tweak that we just reviewed, uses the FlipSwitch framework to incorporate customized toggles into iOS 7’s Control Center. Needless to say, FlipSwitch is an extremely handy tool for developers, because it gets rid of the redundancy of creating shortcut toggles from scratch with every app or tweak.

A new add-on to FlipSwitch has been released called FlipLaunch. It allows users to incorporate app shortcuts directly into releases that support FlipSwitch. This means that one can easily add a shortcut to any app installed on device to any tweak or app that supports the FlipSwitch framework. And because the add-on uses a special two-letter naming system, you’re ensured that the application launch toggles will always look good and never out of place.

I’ve tested out FlipLaunch with the FlipControlCenter tweak that we just reviewed. Have a look inside to see how it works via our hands-on video walkthrough.

Once installed, you’ll see a new FlipLaunch preference panel located in the stock Settings app. The add-on’s preferences consist of nothing more than a list of apps that can be checked to enable, and unchecked to disable. Once apps are enabled, they will appear in any app that supports the FlipSwitch framework. 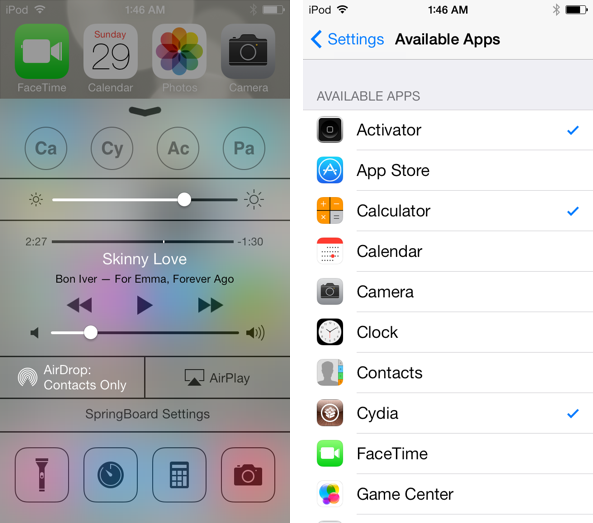 All applications that you have installed on your device, whether it be stock apps like the App Store, Calculator, or Calendar, or whether it be third party applications like Cydia, or Spotify, can be enabled and used as shortcut toggles. Even better is the fact that throughout this whole processes of enabling and disabling specific tweaks from contention, there are no resprings required, and the changes take effect immediately.

But none of that convenience would matter if the toggle buttons were poorly designed and lousy to look at. Thankfully, Jack Willis, the developer of FlipLaunch, took a smart approach. Instead of using an app’s icon, or some other generic avatar, FlipLaunch uses a stylized version of the first two letters that make up the app’s name. For instance, when you have Cydia enabled, the toggle will read: Cy. The toggles look good, and remind me of the periodic table of elements in style and design.

FlipLaunch adds a powerful new set of features to the already awesome FlipSwitch framework. If you use a tweak like FlipControlCenter, you now have a bonafide way to add additional app shortcuts directly to Control Center.

Head over to Cydia’s BigBoss repo to find FlipLaunch. It’s a free download and it’s available right now. Be sure to share your thoughts on the release in the comments down yonder.