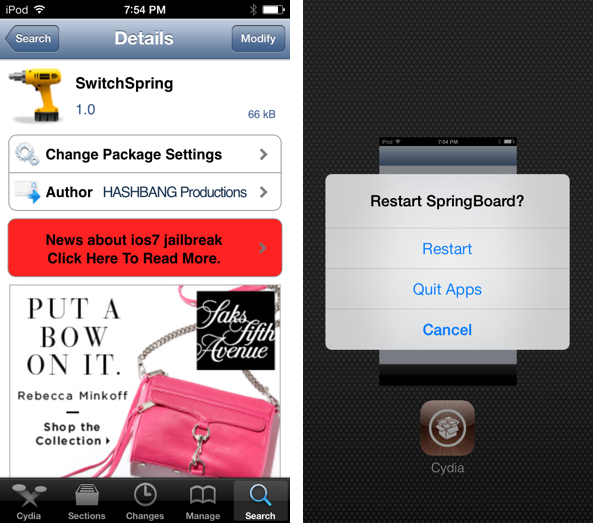 And…let the inevitable deluge of new jailbreak apps and tweaks begin! SwitchSpring is a brand new jailbreak tweak that just appeared on Cydia today. Keep in mind that there still may be some underlying compatibility issues with jailbreak tweaks as all of the bugs and updates get ironed out from yesterday’s surprise iOS 7 jailbreak release, but things are slowly moving towards that direction.

I was able to test out SwitchSpring on my jailbroken iPod touch 5th generation, and it worked just fine. This is a jailbreak tweak that allows you to easily kill all running apps or respring your device right from the app switcher. Of course, I’ve made a video walkthrough showcasing how SwitchSpring works in action, and I encourage you to take a look.

Killing all apps works just as advertised, and so does respringing. It’s a simple tweak, but it’s exciting to see something custom built for iOS 7’s new features. The mind can only imagine what cool goodies are in store as more developers get a handle on what’s new, and the various components necessary to support the apps and tweak we know and love are updated.

SwitchSpring is from Hashbang Productions, and it’s available for free download now on Cydia’s BigBoss repo. Let me know what you think about it in the comments below!