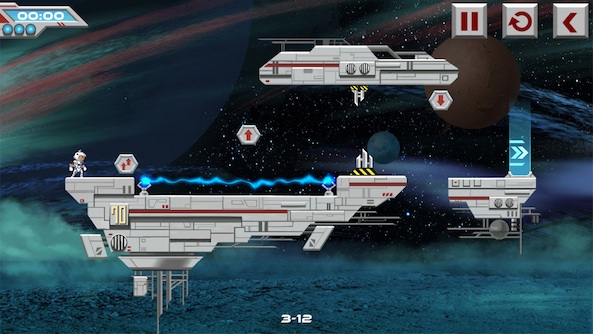 Whenever I see a game in the App Store with the word “run” in the title, I assume it is an endless runner game that is trying to capitalize on the popularity of Temple Run. I love Temple Run and there are other games like it that are very good, too. However, there are a lot of titles in the endless runner genre and these days, it is hard to find one that offers something new.

Galaxy Run has a deceiving name. It isn’t an endless runner at all. It is a physics-based game that combines fast paced runner action and arcade style mechanics…

This is a side-scrolling game. It could be described as an auto-run platformer since the point of each level is to get to the exit portal by jumping from platform to platform.

The art design mixes a bit of Star Wars and Star Trek (I know, blasphemy!) cartoon imagery with the main character sporting a fashionable Astronaut costume. The background looks like it could be photographs taken from some deep space unmanned shuttle that was shot into outer space 20 years ago.

Players perform one simple task, jumping. The key is timing. If you jump too soon, you may get spiked. If you hesitate too long, you may fall to your doom.

Why this astronaut is capable of falling at all is an unanswered question. Obviously, in zero gravity, he would just spin out of control in one place. Don’t get me started on how it is that, when he jumps, he doesn’t just take off on into the atmosphere. I’ve seen “Gravity.” I know what happens in space. 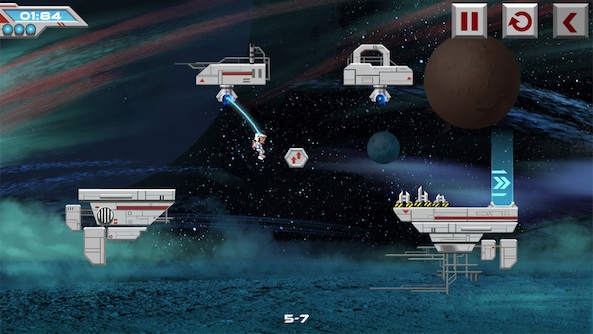 As I mentioned above, the only thing you must do is jump. Players tap the screen to make the astronaut start running. Then, tap the screen every time you need him to jump. Some platforms are clear and wide, making the jump easy to accomplish. Other times, there are spikes in the way, or the landing will crumble under your feet, or the next platform is above your head.

The first dozen or so levels are fairly simple. Players jump from one platform to another with a few obstacles. On some levels, you can pick up a special jetpack that will allow you secondary mid-air jump capabilities. The power up looks like a hexagon with two arrows pointing upward. Be careful not to overuse the jetpack. If you run out of juice before you get to the end, you’ll miss your platform and fall.

On some levels, the next platform is above you. There will be a hexagon with an arrow pointing upward. You must jump onto that power up in order to flip upside down. There will be another one pointing downward to get you right side up again.

As the game progresses, the obstacles become more difficult and the power ups become more intricate. You’ll be swinging from electric ropes across spikey platforms after running upside down at super charged speed before you know it.

If you fall off of a platform or get spiked to death, you will have to restart the level. The points are scored by how fast you complete the level. If you have to restart, the time does not start over. So, adding an extra half-a-second could cost you a star or two. If you don’t get it right the first time, move quickly to try again. 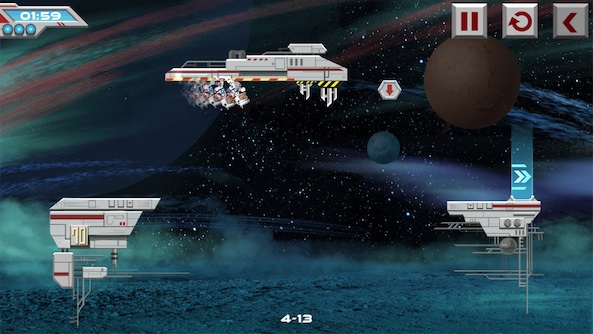 It’s not an endless runner game. When I first heard about this game (by name only), I thought, “meh.” Then, I played it and was pleasantly surprised at the action packed arcade style physics based fun.

The art is clever and the little astronaut looks pretty cute when he is getting ready to run.

As usually happens with casual games like this, I found myself getting bored after a while. Timing out your jumps is fun, but only for about an hour. After that, the repetitiveness of tapping might make you want to put the game down for the day.

Galaxy Run costs $0.99. That is the perfect price for a game in the casual genre. There are in-app purchase options, but I played through about 50 levels without even thinking about buying a power up. The items in the store are mainly for people who want to take the easy way out. You won’t likely find yourself spending extra money.

If you thought this was going to be an endless runner game and groaned at the thought, you’ll be happy to know that this is not even close to being endless. In fact, most levels take about five seconds to get through. If you like physics-based games that push your reaction skills to the limit, you’ll have fun, even if the levels start to feel repetitive after about an hour. This game is available on the iPhone, iPad, and iPod touch. Download it in the App Store today.

The same company made another physics-based title called Propel Man that fans of the genre would also like.

What do you think of Galaxy Run? Are you glad it is not another endless runner? Do you think you’ll download it?