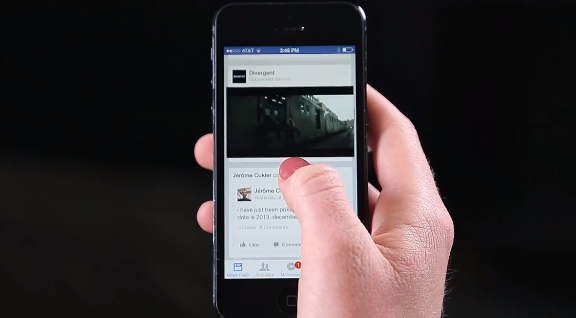 We told you last week about a Facebook for iOS update that gave the social network the ability to automatically play videos right inside our timelines. Similar to how videos begin to play in Instagram as soon as they’re scrolled to, Facebook has decided to bring the feature to Facebook proper, and as Cody has already told us all, there’s no way to stop it.

Which we thought was a bit odd. That is, until the other shoe dropped and Facebook’s master plan fell into place: video ads.

Now Facebook has published a post on its “Facebook for Business” news page in which it explains how auto-playing videos – and ads – work, as well as offering up an example for those of us yet to be (un)fortunate enough to witness them in our timelines…

The news update from Facebook, which is obviously aimed at its content and advertising partners, explains the reason behind the company’s decision to offer auto-playing videos in the first place. Calling the ads a “richer storytelling format for advertisers,” Facebook believes that “sight, sound and motion are often integral components of great marketing campaigns.” We probably wouldn’t argue too hard against that, if we’re truthful. What concerns us is the inability to turn them off.

As far as usability goes, the implementation actually looks quite good. Sound will not play just because a video is in view and is the same method that Instagram uses. Tapping that video then loads it full-screen and at full resolution along with the accompanying sound. Once the video’s done and dusted, a further two videos are presented as a carrousel with advertisers no doubt hoping to use one video ad as a gateway to getting us to watch others. Those sneaky ad men!

Does this latest advertising move by Facebook leave you a little uneasy about the whole thing, or are you happy to watch a few silent ads for the sake of having access to the world’s most popular social network without having to spend a penny? It’s worth remembering that Facebook says this is all a test, but assuming advertisers buy the idea, how long before our timelines are full of auto-playing video ads?