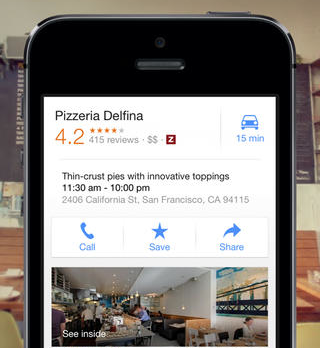 It’s been some time since we’ve seen a meaningful update to Google Maps for iPhone and iPad, especially given Google Maps is probably the Internet giant’s most popular product, after Search.

As if reading our mind, just an hour ago the firm has quietly pushed a minor update into the App Store. The new Google Maps version 2.5 comes with a few bug fixes and brings with it a cool new feature which lets you see your reservations from Gmail on the map.

Say you made a flight, hotel or restaurant reservation. Upon receiving the confirmation email in Gmail, Google can now take this information (they are already doing this for Google Now cards, by the way), extract the address and show you precise locations for these items within the Google Maps iOS app.

It’s a minor, albeit welcome, enhancement that will up competition a notch for Apple’s own iOS Maps app. I love how little things like this make Google Maps more integrated with other Google apps. We’ve seen Google do this frequently and my guess is they’ll continue to leverage their premium iOS apps to build a platform on top of iOS, so to speak…

iTunes release notes list no changes aside from this new feature and bug fixes.

By the way, you haven’t forgotten about the caching trick, have you?

To make the currently viewed map and the surrounding areas available offline, tap the search box and type in ‘ok maps’ and hit Search. There should appear a large Google Maps icon that’s progressively filling as the area gets processed for offline caching.

The universal Google Maps app is free in the App Store.

The download comes in at a rather paltry eleven megabytes. The app is universal so all your form-factor iDevices are supported natively, as long as they run iOS 6 or later.