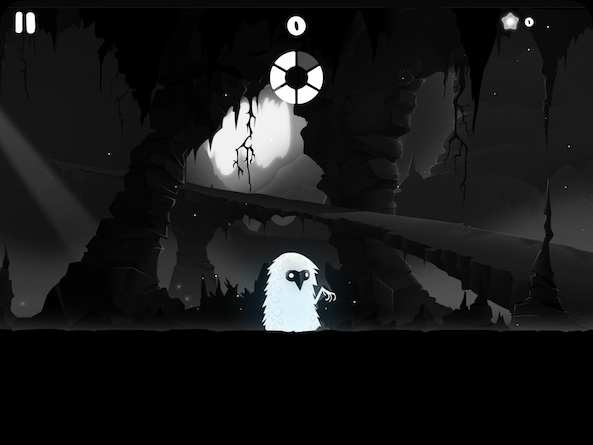 If you find yourself attracted to visually stunning games, you are in luck. More and more unusual, atmospheric games are being added to the App Store on a regular basis.

Darklings is an atmospheric game that puts you in the world of Lum as he tries to save the light. Travel through forests and caves, battling Darklings and trying to bring light back to the world…

Visually, this game is very similar to platform cerebral games like Limbo and Badland. The entire color pallet is a variety of shades of gray. The main character and his enemies are sharp and in focus in the foreground while the background is full of shadowy mist-covered impressions. The game’s theme makes you feel like you are walking in a dream world.

When you successfully attack an enemy, your “Soul” Lum will shape shift temporarily into a new creature. He will morph into a different shape and grow larger. You can also double your point score by making a combo, depending on how many Darklings you possess in a row.

When you possess an enemy, Lum will purge it from this world, causing stars to shoot from him. Collect the stars to use them in the game’s store on upgrades and bonuses. Larger stars will extend the time you get to play each game.

You can also purchase costumes for Lum, like the Viking or Vader costumes. These different looks can be added to your collection by spending your stars. 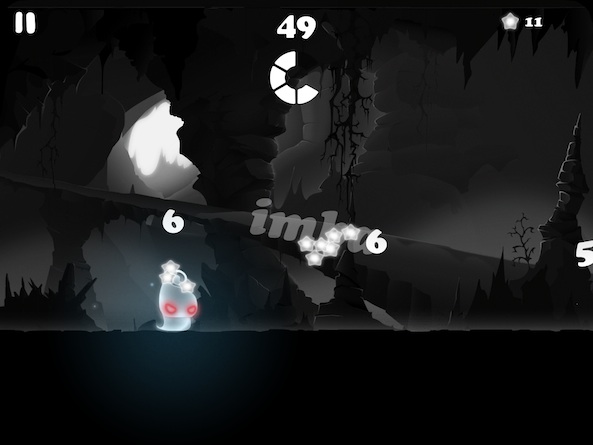 The point of the game is to possess and purge Darklings from your world. The evil beings have stolen the stars in Lum’s world and the only way to get them back is to jump inside of them and destroy them with light.

To possess a Darkling, players must draw its corresponding symbol on the screen. Each Darkling has a glowing mark on it. When you draw that mark in the sky, Lum will jump into its body, knocking nearby enemies away, and squeeze the dark out of it. Every time you possess a Darkling, stars will shoot out of it. Drag your finger from the stars to Lum to collect them. The larger stars extend the game’s time.

Don’t let a Darkling get too close to you before possessing it. If one touches you, it will snuff out your light immediately.

When the clock runs out, the big boss appears. He will spit a large group of Darklings out at one time that you must destroy before they hit the ground. When you have successfully passed the first half of the boss battle, you will then have to attack the big bad guy directly by drawing a series of symbols, in order, within a specific amount of time.

The game features multiple chapters. After you have killed a boss, you will move onto the next chapter where Darklings are bigger, badder, and more prevalent. When you possess and purge them, you will earn more stars, but it is much harder to keep up with the new and changing symbols.

As the game continues, symbols become more complex and there are more Darklings to avoid. If you don’t draw a symbol correctly and a Darkling touches you, you will die and must start from the beginning of the chapter you were just on.

If you find yourself having a difficult time getting from one chapter to the next, upgrade Lum’s abilities. You can add various power ups, like extensions to your blast radius, stronger shields, and more. You can also buy upgrades, like getting more stars when you possess a Darkling, or adding more time. 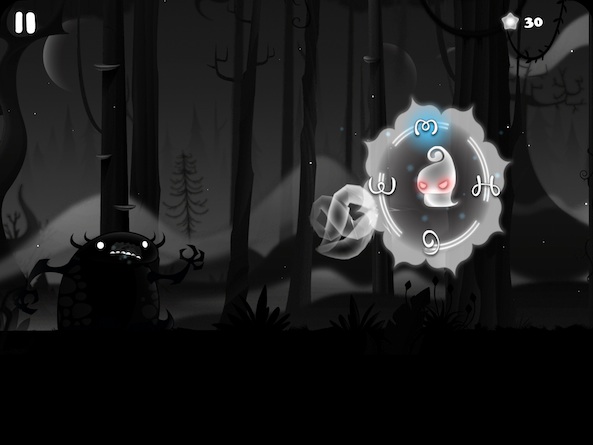 This game looks great. It has a nice, eerie theme that makes you feel like you are walking through a dream world. But looks aren’t everything. This title also has a fun, unique game mechanics. All you have to do is draw symbols, but you’d be surprised how challenging that can be.

The game gets a bit repetitive after a while. Sure, you’ll be drawing new symbols, but there is nothing else to do in this game. It is level after level of drawing symbols. I found myself feeling distracted from this game after about an hour. I was excited to pick it up again the next day, but it is definitely not a game that will keep you glued to your iPhone for hours and hours.

Darklings is on sale for $0.99 until Dec. 12. It is regularly priced at $1.99. The lower price tag is obviously a better value. However, even at $1.99 it is reasonably priced for its interesting game mechanics and visually enticing graphics.

You have to be a fan of casual games to understand the simplicity of this game. There is only one thing to do: draw symbols. What makes it interesting is the challenge of trying to possess every Darkling in the forest before it is too late. If you don’t mind the single-subject mechanics, the payoff is a good-looking game with an interesting concept. This app is available for the iPhone, iPad, and iPod touch. You can download it in the App Store today.

Limbo, Nihilumbra, and Badland have similar looks. Although these games are platform puzzle games instead of gesture based symbol-drawing games.

What do you think of Darklings? Do you like games with dark atmosphere?