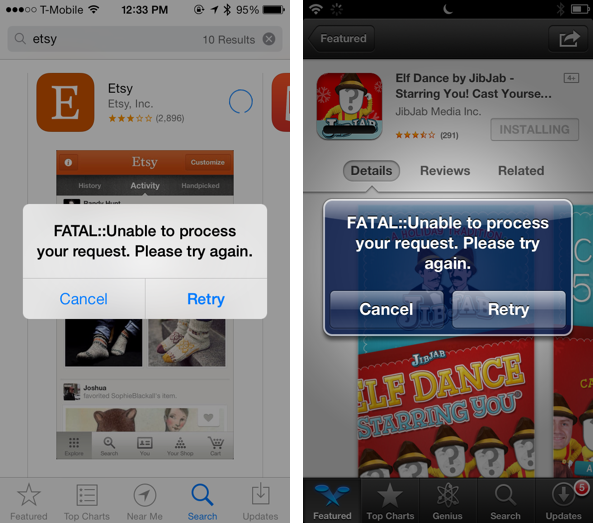 Last night, I tweeted a picture of an error message I received while trying to download an app from the App Store. The error was: FATAL::Unable to process your request. Please try again.

I had never encountered that error message until then, and I chalked it up to the random iOS 7 problem. After rebooting my phone and logging out of my Apple ID account via Settings > iTunes & App Store, I was met with the same exact error message. Even when trying on another device the error message persisted. I decided to go to bed, hoping that everything would be okay in the morning.

Well, I just tried to download an app again, and was met with the same exact error message. I thought to myself, “Okay, perhaps this is an iOS 7 issue since I had only tried it on iOS 7 enabled devices up to that point.” Nope. After trying it on my iPod touch, which is still running iOS 6, I was met with the exact same FATAL error message. In fact, I was met with the same error on my Mac when attempting to download from the Mac App Store. So what gives? Apple’s System Status page is showing everything is okay, but that’s obviously not the case…

From the looks of it, this is an issue that many Apple users are experiencing. There’s a thread on Apple’s support forums that is six pages long with not a fix in sight. The thread was started on December 4th, which is approximately the time when my issues began to occur.

And that’s not the only thread. There’s this thread, and this one, and oh, this one.

This looks to be a much more widespread issue than I initially imagined. So the question is: are you experiencing this FATAL error message? Have you been able to fix it? Share your experiences in the comment section.

So far I’ve been able to confirm the following about this issue:

I just spoke with an Apple Care representative over the phone, and here was his response:

“We do have some known issues with the iTunes store that started yesterday.”

That was as much as I could get out of the rep. When asked why the system status page showed everything is being okay when there were “known issues” he declined to comment.

Update: The issue now appears to be fixed.