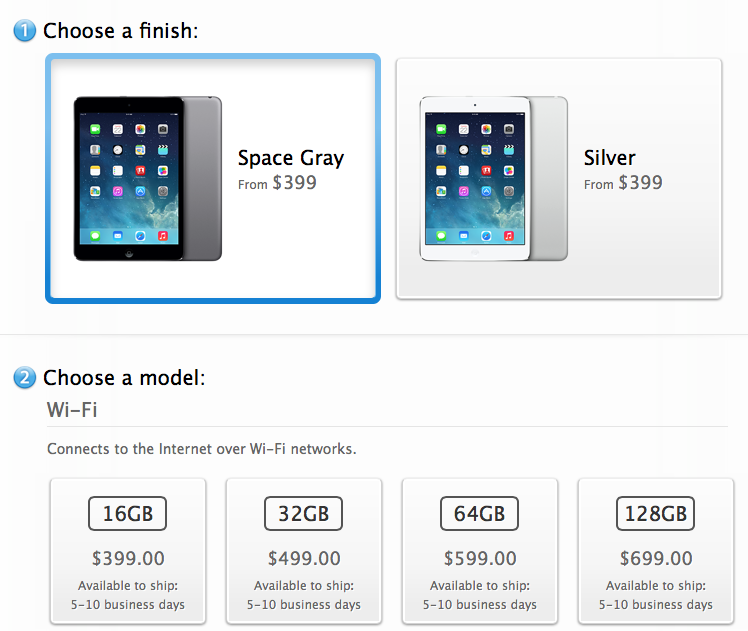 In another development that won’t please holiday shoppers, the entry-level 16GB Retina iPad mini along with its 32GB variant have become harder to come by as shipping estimates on the online Apple Store slip to 5-10 days. Matter of fact, now all capacities, colors, wireless and carrier models (Wi-Fi-only and Wi-Fi + Cellular) of the iPad mini with Retina display are shipping in 5-10 days…

A quick hop over to the online Apple Store reveals the new 5-10 day shipping estimate for all Retina iPad mini models. This came just as LTE-enabled Retina minis started slowly trickling into Apple’s retail stores in the United States.

It gets worse as three major U.S. carriers all back-ordered on the cellular version: T-Mobile, for instance, is now citing 6-8 week shipping estimate for Retina minis, with T-Mobile and AT&T quoting 6-8 week and 21-28 day deliveries, respectively.

All of this suggests Apple hasn’t ramped up manufacturing yet to meet high demand for the device. Would-be buyers should expect shipping times to continue to lag as we head into the holiday shopping season, which kicks off in the United States with Black Friday next week.

When the Retina iPad mini 2 launched on November 12, Apple initially allowed only online orders, which customers could either have shipped or picked up personally at a desired Apple Store.

The shortages are blamed on production problems with Sharps’ IGZO screens and are expected to persist until the first quarter of 2014, when Apple is expected to switch to Samsung-made Retina panels as the Galaxy maker was allegedly “the first to solve the technological problem”.