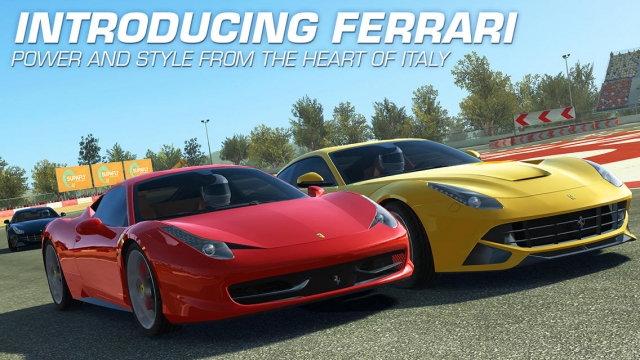 Electronic Arts’ Ferrari-focused Real Racing 3 update is out for a little more than a month and earlier this week the super publisher pushed another update which will make Ferrari fans happy and glued to their iPhones and iPads.

The latest update also adds other perks and goodies, including cinematic race replays (finally!), four new event series with a total of 100+ new events, weekly time trial tournaments and more. Your promo clip and other highlights are after the break…

The update includes the Enzo Ferrari lineup of sexy cars like the 458 Spider and 599 GTO. I’ve always wondered why Real Racing 3 lacks instant replay and now these cinematic race replays are a reality in Real Racing 3 version 1.5.

The replays even include playback controls so you can really zoom in on action and relive your victory in full glory and from every angle. I’m glad that Electronic Arts is continuously refining the game mechanics, as opposed to just cramming up new missions, tracks and cars.

• New Cars – the Enzo Ferrari joins the family of extreme performance cars, along with the 458 Spider and 599 GTO
• Weekly Time Trial Tournaments – climb to the top of global leaderboards and win huge R$ and Gold prizes!
• Race Replays – relive your victory with full cinematic cameras and playback controls
• 4 New Event Series – dominate the competition in over 100 new events

As you know, Real Racing 3 is a free to play release with some in-app purchases which luckily are not required due to some clever game design.

The 1.06GB download requires an iDevice running iOS 4.3 or later with at least 1.5GB of free space. It’s a rather resource-intensive game with extremely high quality visuals so you’re advised to play it on A6 and A7-powered devices such as the iPhone 5 or later, the fifth-generation iPod touch or iPad 4 or later.