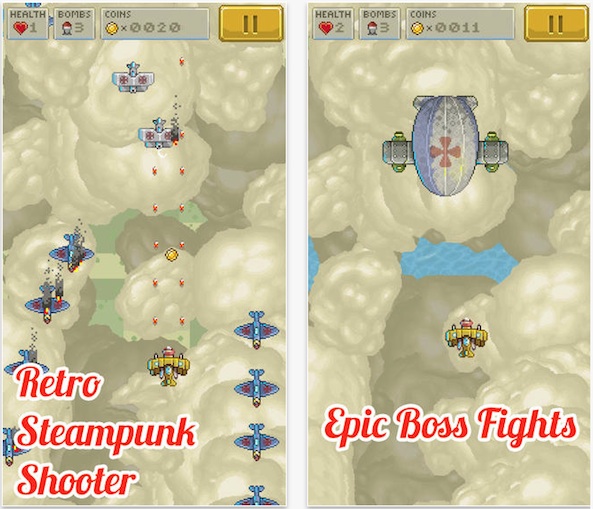 As a kid, my favorite arcade games involved shooting things non-stop until the screen was cleared. The best ones would give you random weapon pickups so you could splatter huge groups of enemies in one shot. Theses action shooter games are still just as fun for me as they ever were.

Sky Knight is a shoot ‘em up game where you are flying an old timey World War I style fighter plane in a pixelated environment. Not only are the graphics decades old, the theme is practically centuries old…

Players control a pixel heavy biplane as it flies through the dusty beige sky. An onslaught of enemy fighters will bombard you in wave after wave of attacks. Maneuver your plane to steer clear of incoming formations, while blasting away as much as you can. 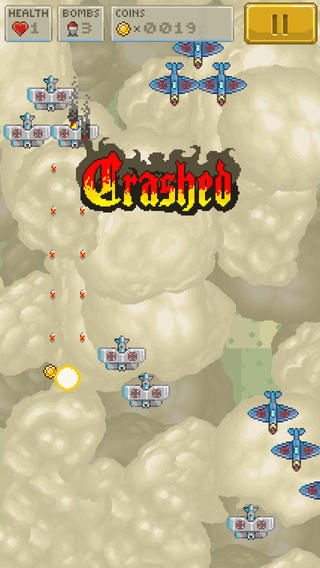 Collect coin from destroyed planes as they fall from the sky. Use the coins to upgrade your weapons. Use better weapons to destroy more enemies and collect more coins.

In addition to a basic machine gun, players start each game equipped with three bombs. Double tap the screen to launch one bomb. The effect will clear almost every plane around you, giving you room to move out of danger, and producing a nice supply of coins.

If an oncoming plane hits you, you will lose one health point. Be careful when maneuvering between planes, they are closer than you think.

Players start with three bombs and three health points. In between each game, you can upgrade your machine gun, equip and upgrade a magnet, add more bombs and increase your health. 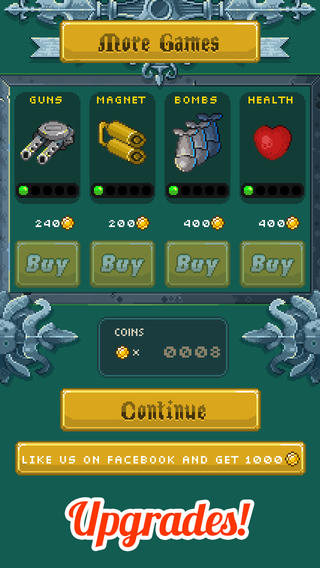 This is a vertical scrolling shooter arcade style game that has similar mechanics as the Raiden series. Players man a fighter plane and shoot down as many enemies as possible without dying. At the end of a certain number of waves of attacks, players will face a boss that is much stronger and more difficult to beat.

Sky Knight doesn’t give you a choice of planes, or offer weapon drops like Raiden does. However, it definitely has a retro feel of flying through unrelenting waves of enemies until you just can’t take it anymore and your plane explodes in a fiery ball.

It is important to note that this game includes pop up advertisements for other games, even though it costs money to download.

Sky Knight is available for the iPhone, iPad, and iPod touch. You can download it in the App Store today for $1.99.

Do you play shoot ‘em up games? Do you think Sky Knight looks anything like Raiden?