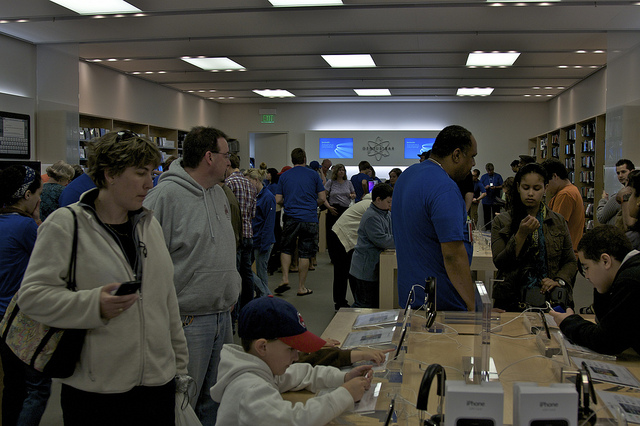 If someone asked you which Apple Store in the United States sold the most iPhones, you’d probably name off some of the flagship locations like the one in San Francisco on One Stockton Street, or the Fifth Avenue Store in New York.

But you’d be wrong. According to a new report from ABC News, an Apple Store located within the Christiana Mall shopping center in Delaware, sells more iPhones than any other in the US. How? Delaware doesn’t charge state sales tax…

The state is one of 5 in the country that doesn’t charge sales tax, meaning when you go to purchase an iPhone for $650, you only pay $650. In other states, like California for example, tax can add as much as $80 to the final purchase price.

Of course, Apple doesn’t break out device sales per store, so there’s no way to technically confirm the claim. But all it would take is a quick drive by the Christiana location to see that there’s probably some truth to the store’s ‘top seller’ case.

“The reasons why the store ranks among Apple’s top performers aren’t hard to see, said Mall general manager Steve Chambliss: This is Apple’s only store in Delaware, a state with no sales tax. The mall’s location on Interstate 95, which links the Northeast corridor, makes it easy for shoppers from three adjacent tax-charging states to flock here.

“We’re the key shopping destination between Baltimore and Philadelphia,” said Chambliss. “We’ve got 6,500 parking spaces, and they’re always all full.”

So heavily-trafficked is the store that it is guarded by Delaware state troopers. There are at least two troopers at a time—as unsmiling as Buckingham Palace guards — inside the store with as many as 10 at the store to rotate through shifts and provide for crowd control.”

While Apple typically limits per-customer purchases, one staffer told ABC News that the store has sold hundreds of iPhones at a time to resellers. And it’s not uncommon to see hordes of shoppers arrive in chartered buses with New York plates.

Apple runs the most successful retail business in existence right now, with its stores bringing in twice the sales per sq. foot as premium jeweler Tiffany. It currently has 411 retail stores, which each brings in an average $10.9 million per quarter.