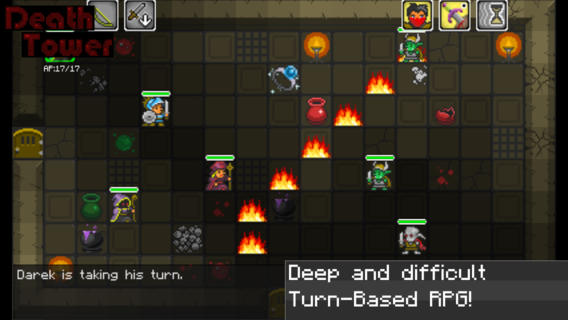 Death Tower is a turn-based battle heavy role-playing game that gives you four fighting characters that explore the vast expanse of a dark dungeon, killing bad guys and collecting loot…

Player start out with just one fighter who wakes up in a room with no memory of how he got there. Even though that premise may sound like the beginning of a room escape game, don’t worry. Your hero has no trouble getting out of the first room. However, he might jump out of the fire and into the frying pan. 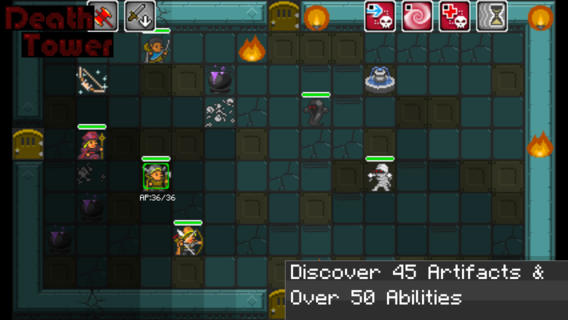 Each new room might produce vases filled with healing power or action points (AP). Or, you may run into a giant spider, determined to kill every member of your party.

After killing the bad guys in a few levels, your hero picks up additional party members. Each member has strengths in certain areas, as well as weaknesses. There is a Cleric that can heal the party, a rogue that can shoot poison darts, a warrior, and more. There are 18 different characters with nine different classes, each with a talent tree so you can train them with different abilities.

As your heroes fight, they earn experience points and eventually level up their abilities. The warriors can improve their ability to take a hit, taunt an enemy, and trigger a critical hit on a melee attack. The Cleric can create a protective shield and heal a party member. The rogue can activate stealth and become invisible to enemies. 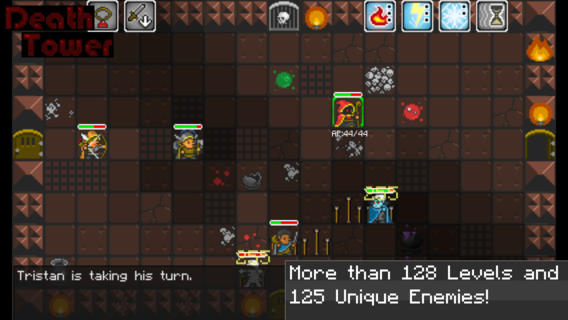 There are also special artifacts to find on different levels. These artifacts add even more power to the adventurer who holds it. For example, if a warrior picks up a giant axe, he will gain the ability to turn into a bear so he can make more damage and hit harder in battle.

After you complete a level, you will be given the choice to take one or more different paths. Each path offers different challenges, but also produces different rewards. You can play multiple games at once and choose different paths for each of them to see where the adventures lead to.

This game is available on the iPhone, iPad, and iPod touch for $1.99. Download it in the App Store today.

What is the perfect adventuring party for you?