When was the last time you heard a major United States wireless carrier admit that its network is facing pressure to meet the needs of its users? That’s exactly what Fran Shammo, Verizon’s chief financial officer, said in response to reports that its LTE network is folding under pressure in major cities such as New York, San Francisco and Chicago.

Shammo said during an investor conference, via CNET:

By the end of this year you are going to see all those issues dissipate. And then going into next year we will be ahead of the curve again.

He admitted that “capacity constraints” result in certain pockets “where we’re absolutely going to experience that down tick from the LTE network down to 3G”.

In response, the Big Red telco is pouring an additional $500 million in capital expenditure this year, investing in small cell technology and turning on more spectrum as it works to build up network capacity, the executive said.

The growth in data traffic is a result of its early move into LTE. Verizon boasts the nation’s largest LTE network, and the longest running, which has meant more LTE customers than anyone.

And LTE customers like their data. While LTE customers make up a third of the company’s total base, they consume 64 percent of the traffic.

Shammo said that in big cities, that percentage is likely higher.

The carrier is shooting to finish the commercial roll-out of its LTE by the summer of 2014 and its LTE now covers nearly 300 million people, as opposed to AT&T which hopes to blanket 270 million people with LTE signal by year’s end.

The outgoing Wall Street Journal tech columnist Walt Mossberg ran his own non-scientific tests to see which of the four major U.S. carriers had the fastest 4G LTE service, using Apple’s iPhone 5s in three locations: a Maryland suburb near Washington D.C., a location in Manhattan and another one in Silicon Valley.

He found that in places like New York, AT&T’s service delivered the speediest LTE experience at an average download speed of 34.8 Mbps versus an average of 19.7 Mbps observed during the three tests. AT&T came in third in Maryland and last in Silicon Valley. 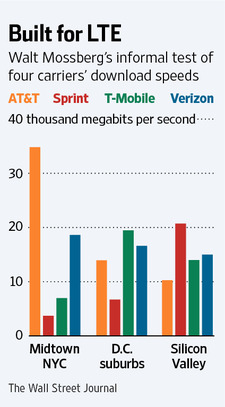 By contrast, Verizon finished second in New York with an average of 16.7 Mbps, well above its promised range of 5 to 12 Mbps. “Verizon wasn’t No. 1 in any of the test locations, but it was the most consistent performer, clustering between 15 and 18.6 Mbps,” Mossberg noted.

It’s worth mentioning that Verizon has now started building its next-generation LTE network, with private tests in New York showing speeds of up to 80 Mbps.

Other tidbits: T-Mobile’s network took the longest of the four to find an LTE signal and Sprint’s LTE signal was patchy in two cities. On its part, Sprint is getting ready to roll out a Sprint Spark tri-band LTE service that will improve reception.

“Sprint says its network is still wanting in some places because it is trying to replace technology while customers are still using the network,” wrote Mossberg.

Again, these are non-scientific tests so you should take the results with a grain of salt as network quality is dependent on a variety of factors, including network congestion, user load, locations, times of day, the type of device used, traffic prioritization, apps and what not.

Sprint CFO: If unlimited data isn’t viable, we would stop. But we have a long runway with it.

“Some of you may not even get LTE at all where you live, typically in rural America,” he summed it up nicely. “The main conclusion I draw from this exercise is that decent LTE speed isn’t just limited to Verizon anymore, and that’s a good thing”.

According to a J.D. Power study (I know, don’t start), Apple is the top performer in customer satisfaction on AT&T and Verizon versus Samsung devices which lead on Sprint and T-Mobile.

What’s your experience with the Verizon network in your area?

Does it work as advertised?

What data speeds are you seeing?