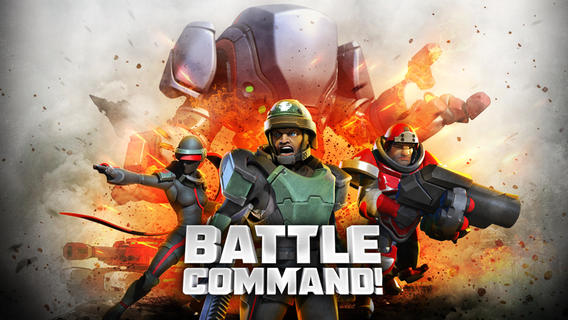 Now that the iPad mini with Retina display has finally launched there will be more 64-bit tablets in the hands of gamers than ever before. Competing in massive player vs. player arena games on the iPad will be part of everyday activities.

Battle Command! is one of those that promises to bring massively multiplayer combat strategy gaming to mobile devices around the world. You can train alone or challenge others across the globe for battle supremacy…

Players lead a small group of warriors to a new camp where they will train to become a fighting force. With the help of your leadership, they will become stronger, more experienced, and ready for battle against others in combat. You will be in charge of recruiting new soldiers, forming alliances with neighbors, collecting resources, constructing a permanent base, and fighting for leadership in unit skirmishes. As you build your resources, you will be able to command a huge military installment, including human and robotic units.

When you are ready for battle, send out foot soldiers, tanks, fighting aircraft, and more to protect your base and overpower enemy forces. Defeat the enemy and take their spoils for your own.

There are more than 20 different offensive units to command, including grenadiers, commandos, spies, and more. Plus, you will be in charge of deploying war-ready vehicles like assault bikes, jeeps, and tanks, as well as, drones, choppers, and other military aircraft. Defend your base with powerful gun turrets, mortars, and missiles.

In addition to fighting head-to-head against others, you can team up with neighbors to form alliances and station your troops in each other’s territories to help defend their base. You will also be able to share resources with your allies. When you team up with others, you will be able to generate new materials for upgrading your base faster.

If you prefer to go-it alone, you can also play single-player campaign mode, where you will go out on more than 25 new missions. You can also practice your battle techniques by playing War Games, where you will not suffer any damage or loss of troops while training.

The game is cross-platform so even if your friends are playing on Android devices, you can still kick their butts. Battle Command! has launched simultaneously on Google Play so you won’t even have to wait for it to be available on both platforms.

This resource management building and real-time strategy battle game is available for the iPhone, iPad, and iPod touch for free. Download it in the App Store today.

Do you play MMOs? What is your favorite platform to play on?