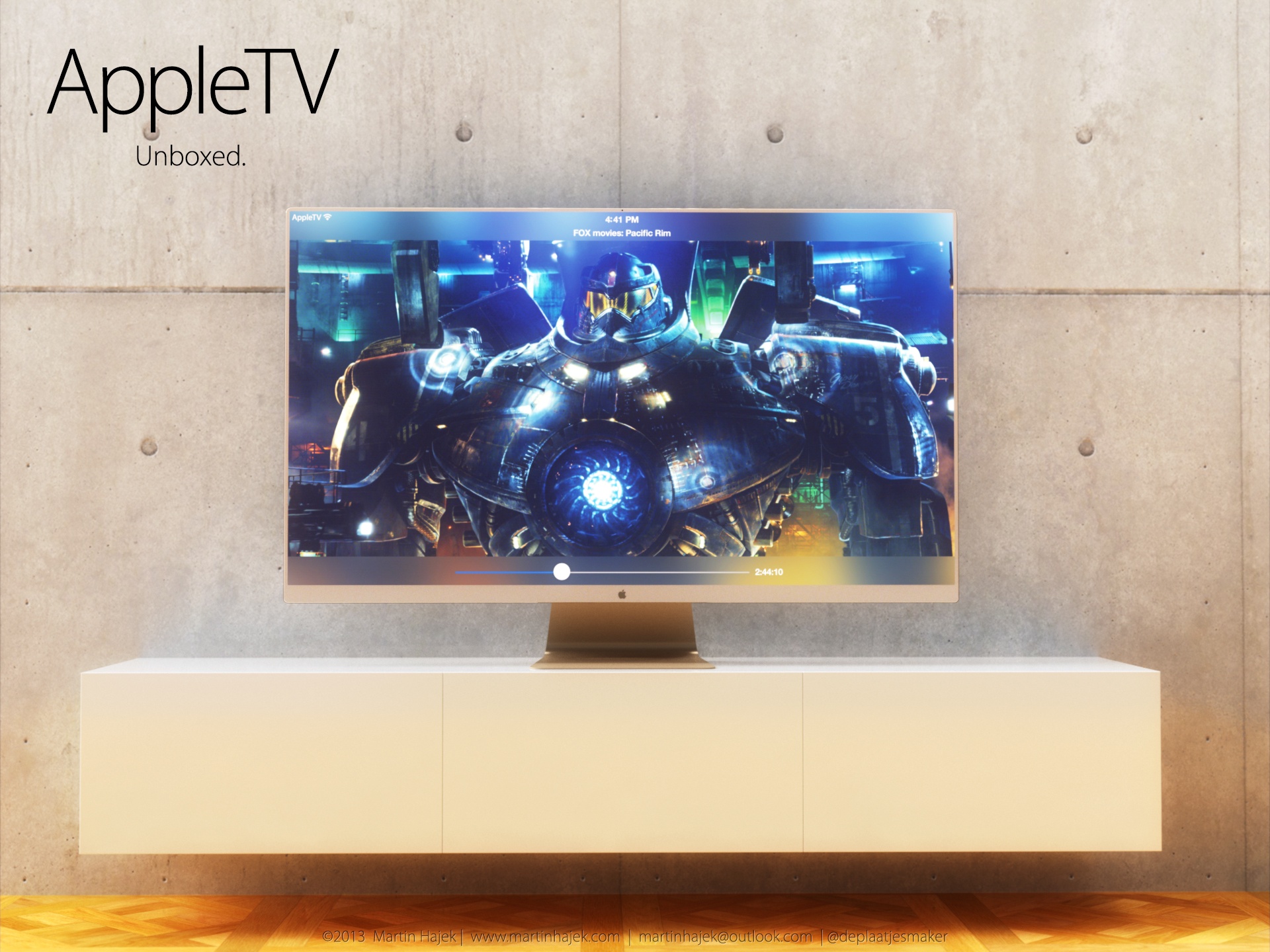 A report by DisplaySearch may have dashed hopes for an imminent Apple television introduction as Apple turns its attention to wearables, but there’s no stopping prolific 3D artist Martin Hajek from imagining what a full-on television set with the Apple logo could/should look like, all over again.

Taking cues from Bloomberg’s report which calls for curved-glass iPhones in 2014, Hajek is now seemingly torn between a flat and curved-glass iTV variant. I know which one I’d take in a heartbeat, but how about you?

The new batch of renderings represents “a small update on the iTV concept I created with iCreate magazine earlier this year,” the artist explained in a post over at his personal blog. 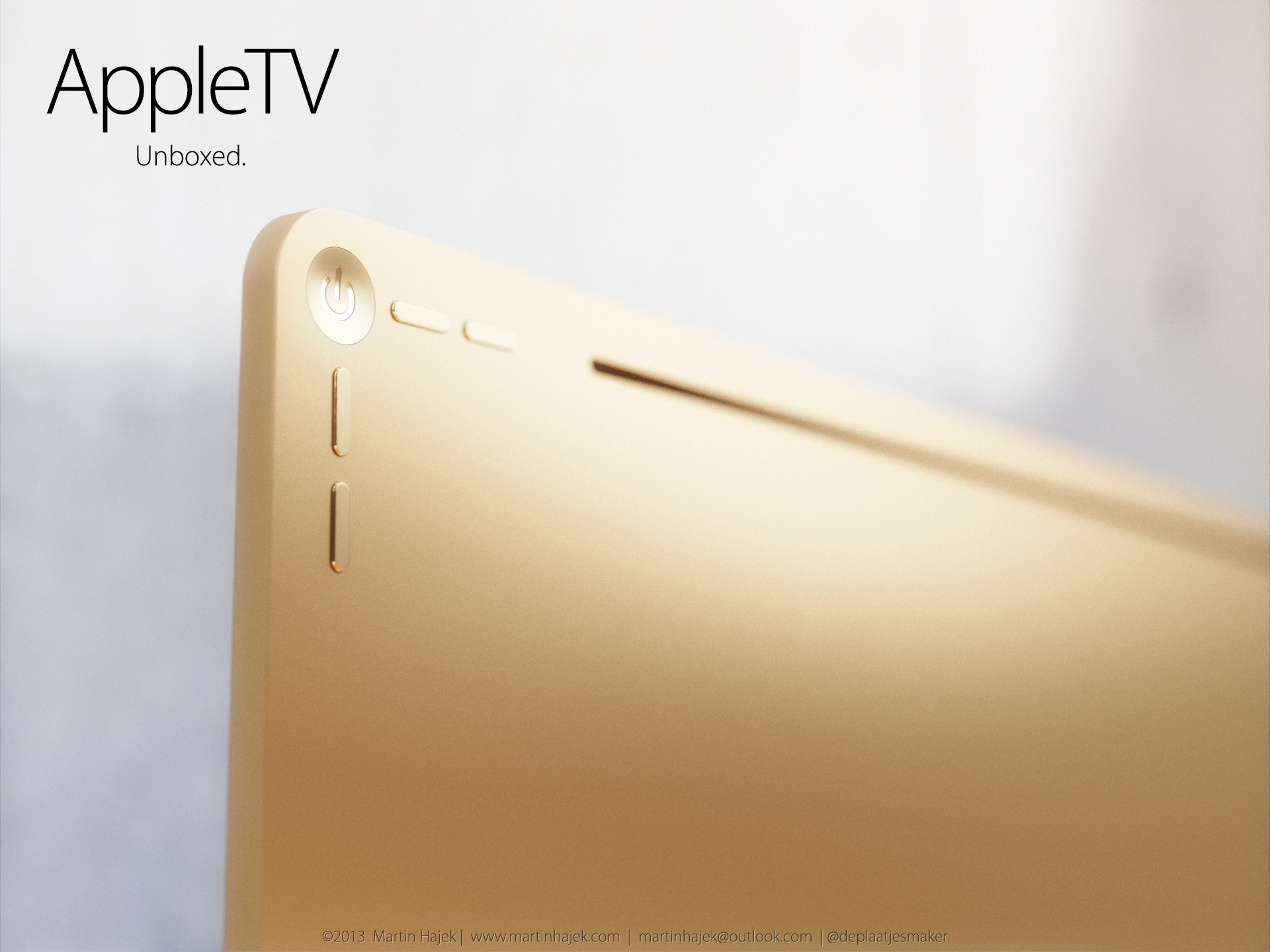 Other questions being posed in Hajek’s mind:

I think I can safely answer his questions with a high degree of certainty, by applying (some) knowledge of the matter and common sense.

There should definitely be an upgrade to the Apple TV box for folks who just need AirPlay and an easy way to stream their entertainment to the living room TV.

At the same time, a pricey full-blown TV set could target high-end, the types who live on the bleeding edge of technology, with exclusive features such as bundled premium TV programming, the awesome 4K Retina screen with 4K iTunes content (Netflix is toying with 4K) to go with it and of course the ability to runs apps and games via an Apple TV App Store. 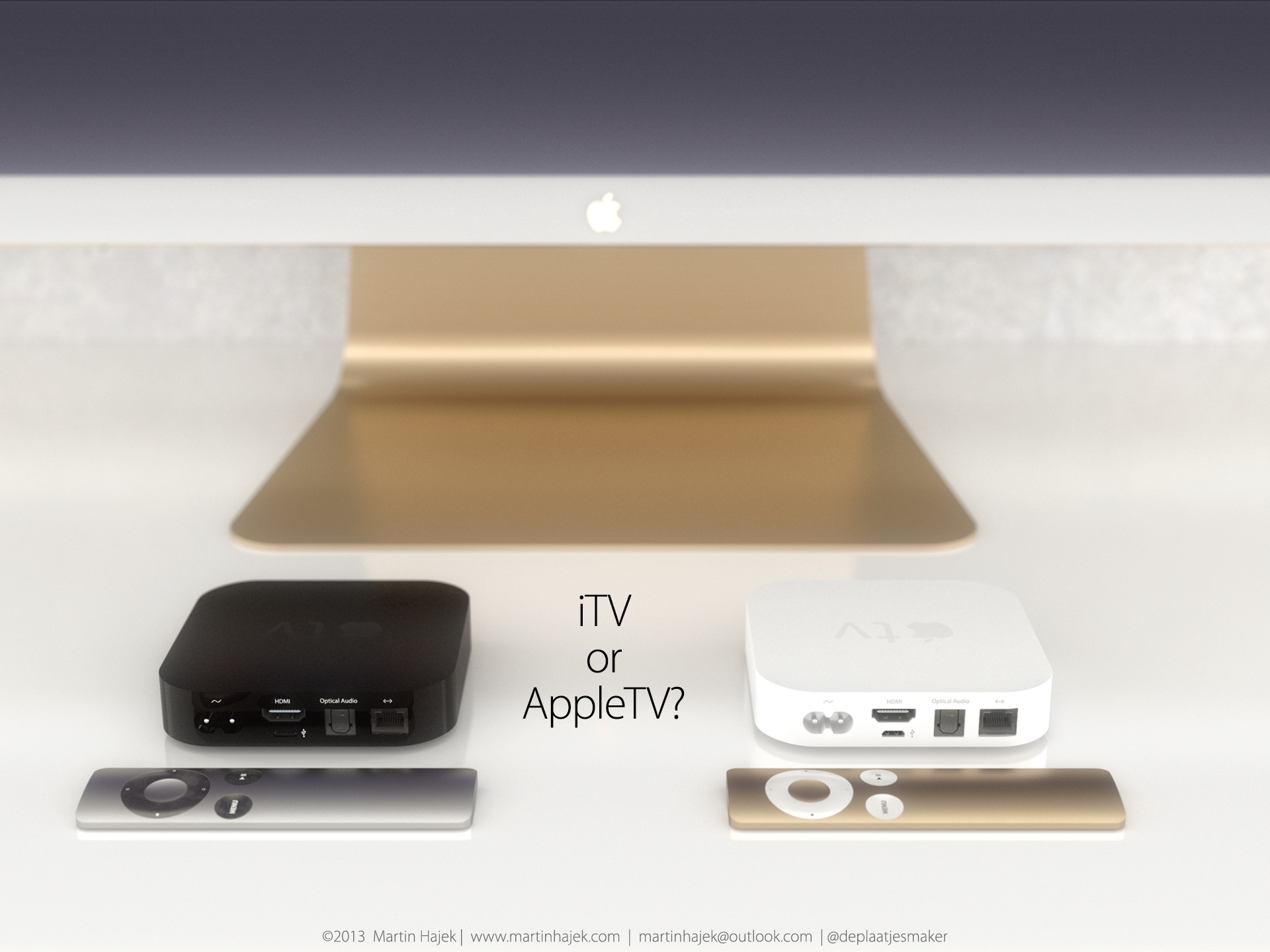 It won’t be white and it won’t be gold. A gold TV set would be just preposterous. And even though white works for mobile devices, I don’t see people hanging an all-white 55 to 65-inch box on the wall. 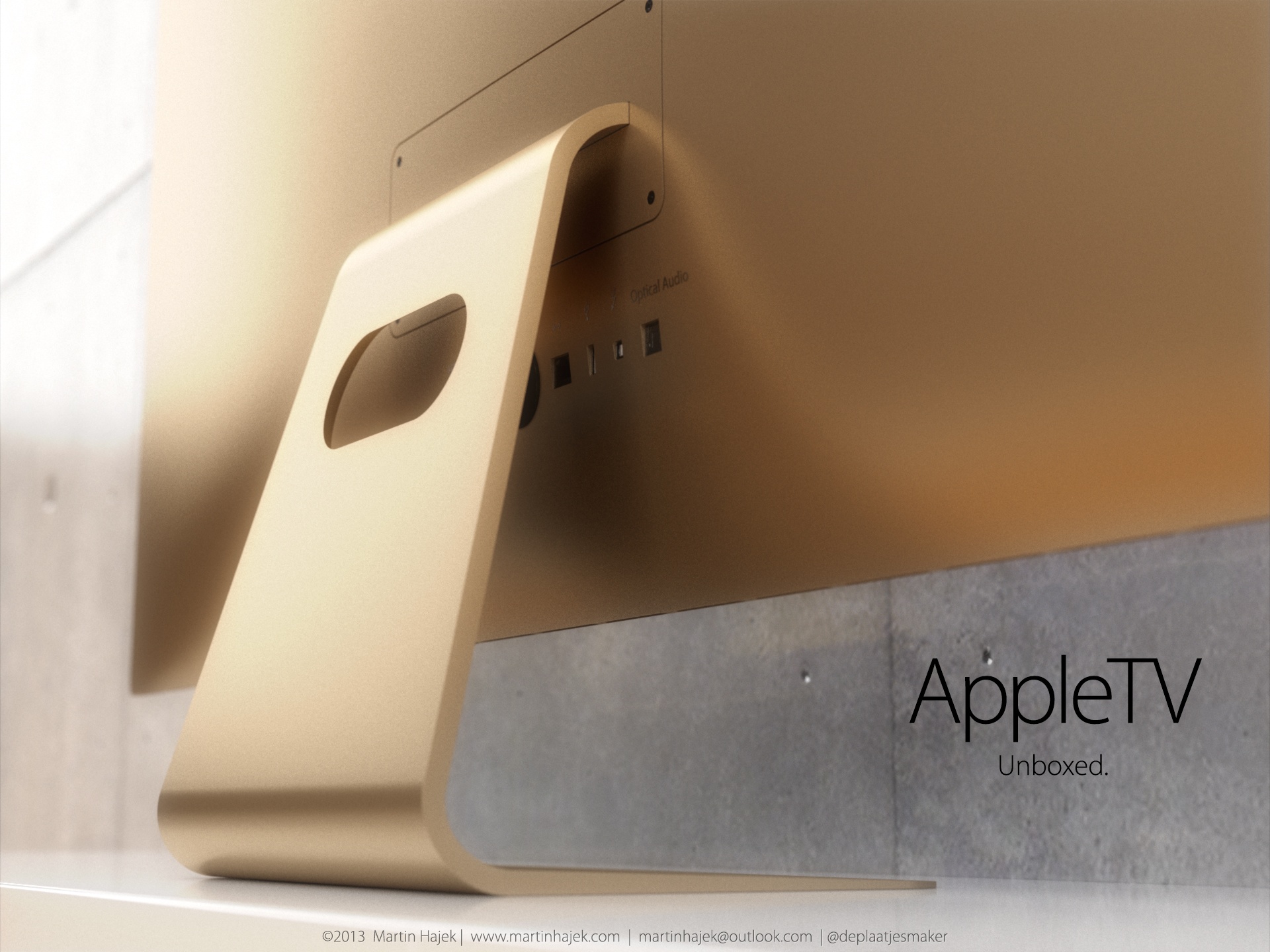 What I’d very much want is either silver or pitch black design to frame that big picture on my wall, but without any visual and design distractions.

It won’t be “a maximized iMac” either – you don’t enter a new category with an old design. 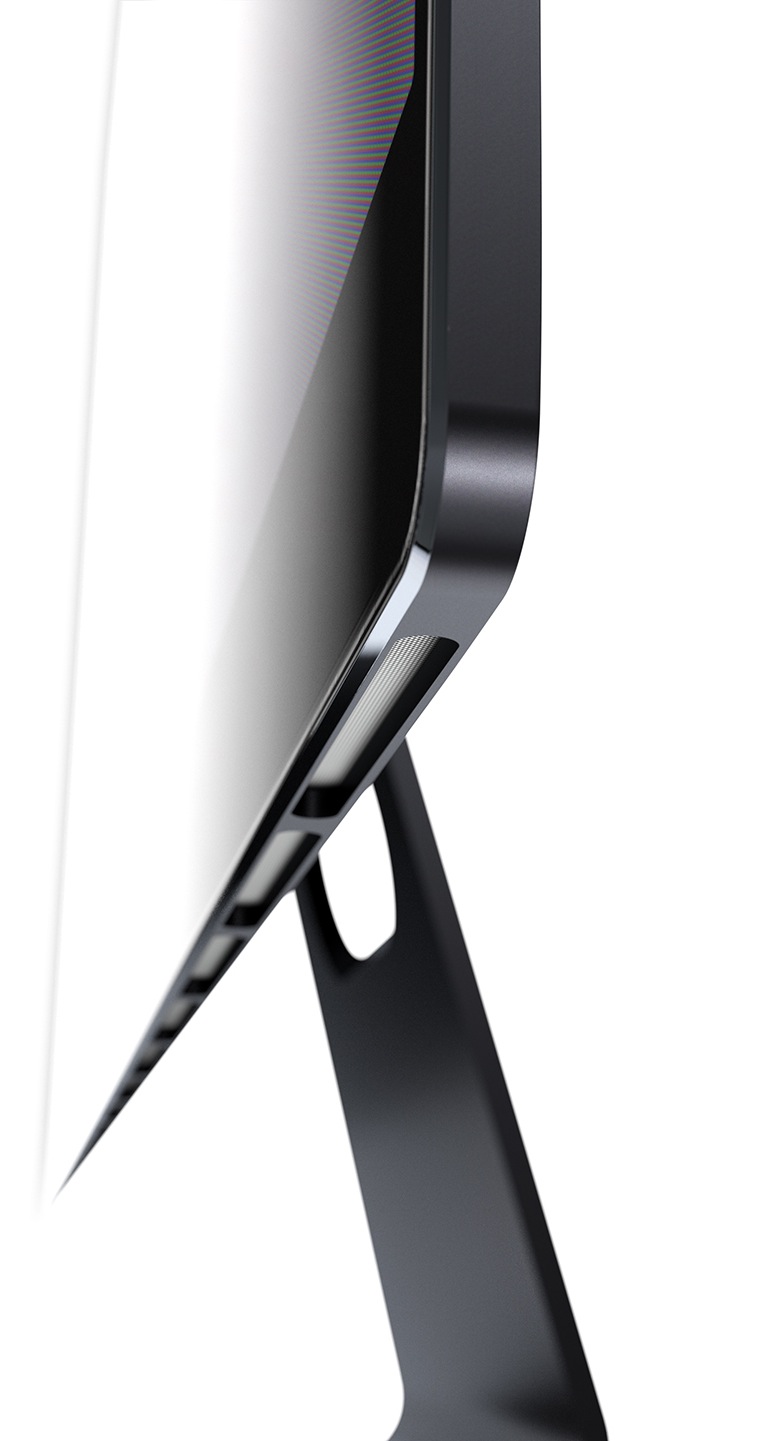 And yeah, it will be most definitely flat – who wants their Hollywood entertainment distorted by a curved-screen design?

There’s a good reason IMAX screens are curved: such a monstrous screen wants to cover as much of your peripheral vision as possible and the best way to achieve this is to apply a slight curvature on the edges. 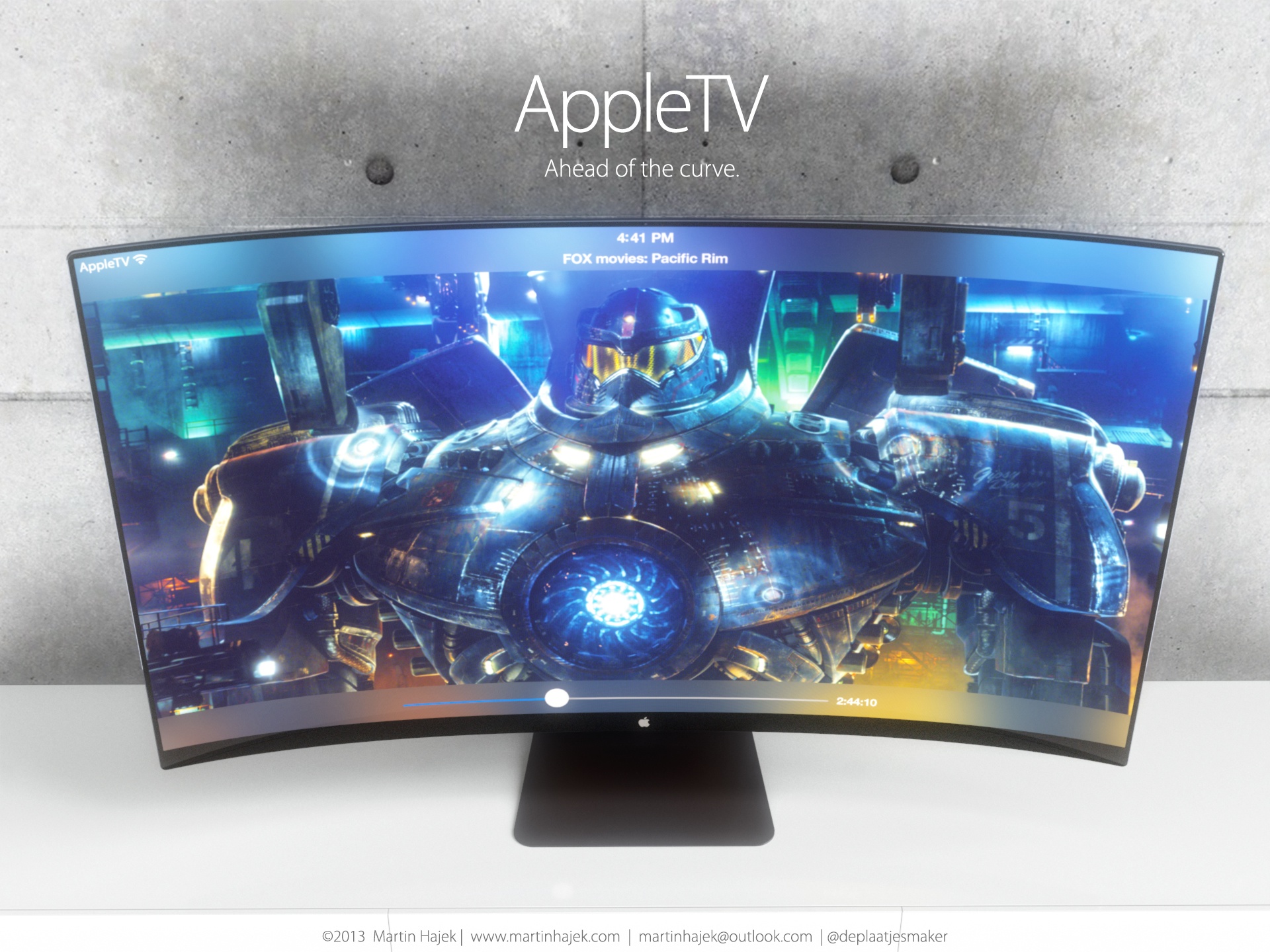 But living room TVs are different.

No amount of curving on a TV set is capable of replicating the movie theater experience. If it worked, Samsung would have put curved screens on their TVs. Even a 150-inch TV screen is simply to tiny relative to the IMAX screen to cover one’s peripheral vision in living room scenarios.

So my advice to Hajek would be: stop the curved-screen thing, drop gold and get back to the basics.

But what do I know, I just blog here.

Anyways, if you’re a fan of gold designs, check out Hajek’s gold Mac Pro, iPhone Air (with a case), iPad Air, iWatch C and other concepts in his rich portfolio.

And don’t forget to check out additional renderings on Hajek’s blog and get back here to chime in with your thoughts down in the comments.