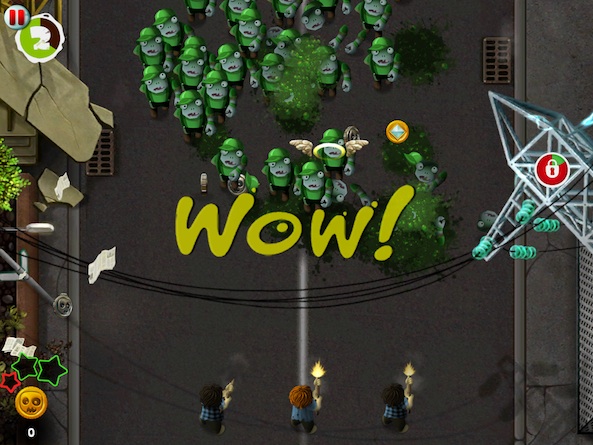 What could be better than combining the casual simplicity of match-three puzzle gaming with action-packed shoot-em-up fun? I love matching games and I love zombies. How can those two worlds possibly collide?

Big Fish Games has figured out a way with Zombie! Zombie! Zombie! HD for the iPad. Now, you can shoot your way through a horde of undead by matching the brain eaters to their counterparts…

As is typical with most Big Fish Game titles, this game is cartoony. The graphics are colorful illustrations with characters who have over-emphasized features and heads that are too big for their bodies. When you destroy a zombie, his guts go everywhere, but don’t worry. His guts are green and nothing looks gross.

The good guys of this game are a team of heroic mercenaries who take to the streets to annihilate everything in their path. The game comes with a team of three, but you can upgrade to five shooters through an in-app purchase.

In addition to the undead shooters, players can activate certain helpful items on the ground in order to send a massive blow to the oncoming brain eaters. For example, you can loosen the screws on the propeller of a downed helicopter and the blades will go flying across the street, killing everything in its way.

Players collect coins for killing zombies that are used in the game’s store to purchase bonuses, upgrades, and special combos. You will earn between 1,000 and 3,000 coins per level, depending on how good you are at picking them up. Items in the store average about 7,500 coins, but can get as high as 20,000 coins for very special upgrades. 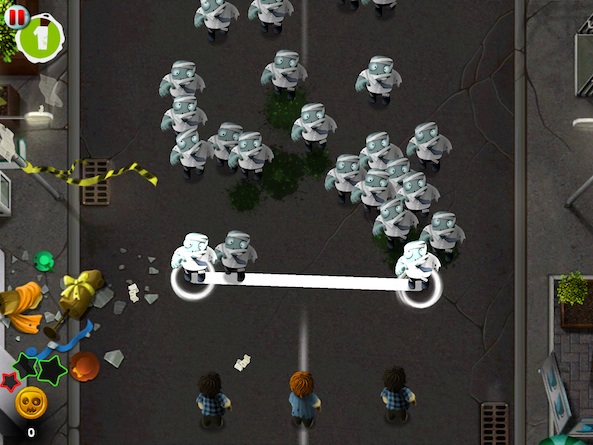 This game is an interesting combination of shoot-em-up and match-three. Instead of aiming and shooting, players designate which area of the street gets riddled with bullets by connecting three matching zombies. Everything within the triangle that is created by connecting the zombies will get blown to bits. So, you don’t want to connect three undead that are right next to each other. Stretch out the attack so that as many zombies are inside the triangle as possible. The zombies inside the triangle don’t have to match to be killed. As long as they are inside the perimeter, they will go down.

Your job is to fend off wave after wave of zombie attacks by creating matches. Work fast and choose wisely so you can kill as many as possible with one blow. Some zombies move faster than others, but will slow down when they get closer to your team. If you time it right, you could take down every undead mug on the street at once.

As the game progresses, so do the zombie’s speed and armor. Similar to Plants vs. Zombies, some of the walkers carry items that must be destroyed before you can kill them. For example, one type of zombie holds a trashcan lid. In order to kill him, you will need to hit him twice. Don’t let the undead get too close to you or they will start to munch on your brains and you will lose an important member of your team.

If you are running out of zombies toward the end of a wave, and one of them does not have a match, you will trigger a “Zombie Rage.” When that happens, all bets are off and you must kill the zombies individually by tapping them. You must move fast during a Zombie Rage. Those soulless monsters can really run when they are upset.

The horde will slow down as it gets closer to you. Sometimes, a creature is running at full speed, and it seems like it will be on you before you have a chance to make a match. However, when it is an inch or two (screen scale) from one of your teammates, it will slow down significantly, giving you a few extra seconds to match it out of existence.

When you kill a zombie, it will drop coins. You must tap them in order to pick them up. If you wait too long, they will disappear. You will grab them automatically if they are inside of a match-three triangle.

Coins are used on bonuses, upgrades, and combos. Bonuses add things like Police Zombies, who shoot at themselves when they are activated, and a wrecking ball that will barrel down on a group of zombies. Combos increase the length of time certain in-game items last. For example, on some levels, you will activate a turret. The turret power-up upgrade increases the armor and makes the shots last 10 seconds longer. Upgrades will improve your armor, give you a flame-thrower, and increase the shotgun speed and range. There are also six upgrades that can only be purchased with real cash, including special ammo against zombies, a coin magnet that will pick up coins automatically.

In case you are wondering how pushy the in-app purchase situation is, I made it through the first 20 levels without ever dying a single time. You don’t even necessarily need bonuses or upgrades until after the first section of the game. As the game progresses, it does get harder to kill stronger zombies without bonuses or combos, but you can also replay levels to earn more coins. Basically, you can get pretty far in this game without having to spend real money. 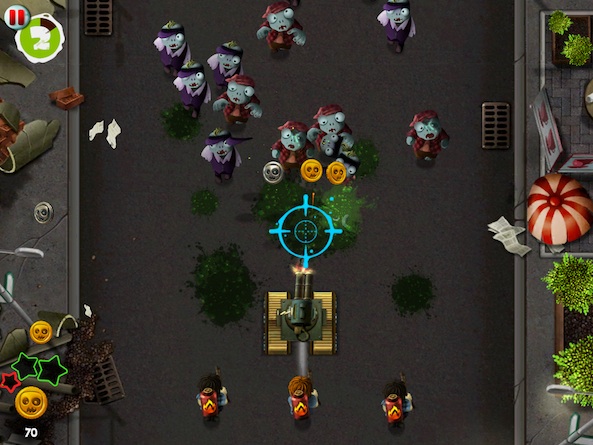 This game is a lot of fun and very unique. I love being able to use my skills at matching to kill hordes of undead. It feels like a shoot-em-up, but you can’t just randomly kill zombies. You have to plan your attack by matching walkers at just the right time.

Even though you can get pretty far without having to pay for in-game items, I am not a big fan of free-to-play. I know this is where the App Store is headed, and games make more money in this genre than they do as a full-priced app. I just prefer paying up front and not having to deal with in-app purchases.

Zombie! Zombie! Zombie! HD is free to download. If you plan your gameplay wisely, you could probably get through the entire game without having to spend a dime. However, useful items can get pricey. You may end up spending more than you want if you are not careful.

I found this game to be a lot of fun and recommend it to anyone who likes mindless shoot-em-up games and also has a knack for match-three puzzles. It is an interesting combination that plays out very well. Just be aware that some of the more useful items in the in-game store are harder to get without purchasing them with real money. This game is available for the iPad. Download it in the App Store today.

I’ve never come across a game like this in the App Store. However, I can say it is sort of like a cross between Zombiewood and Jewel Quest.