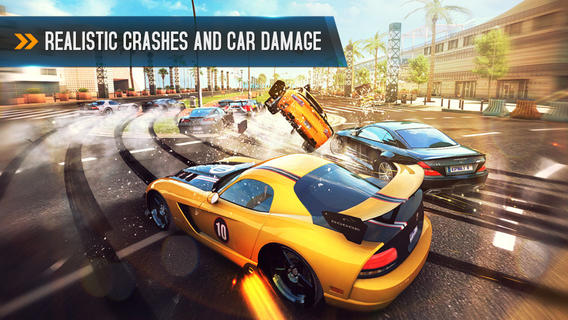 Unleashed on August 22 as a 99-cent download, Gameloft’s Asphalt 8: Airborne was praised for its licensed cars and a refreshingly new concept doing away with simulation in favor of action-packed suspense where racing cars literally fly all over the place (hence the Airborne name). A month later, the game was free for a weekend and in mid-October became Apple’s Free App of the Week on the App Store.

You can now rearrange your touch controls however you want and hopefully play the game using upcoming physical controllers from Logitech, Moga and other vendors, courtesy of the new support for third-party controllers in iOS 7 (release notes mention the “Apple gamepad support”).

There are also new boosters such as Tuning Kit, Nitro or Double Credits and new time-limited cups to win more credits, upgrades and exclusive cars. The new reverse tracks in multiplayer include Nevada, Iceland and Tokyo, you can now see how your opponents’ ratings change after each race and Game Center matchmaking is faster than before.

These enhancements come in addition to the 40+ licensed cars, an extensive Career mode, an impressive physics engine and other treats. Gameloft mentions that new cars will “appear at any moment” so give it a few hours should the new vehicles be unavailable to you.

Asphalt 8: Airborne is free to play on the App Store.

Keep in mind there are a bunch of in-app purchases to unlock various aspects of the game, get you in-game credits and allow for vehicle upgrades.