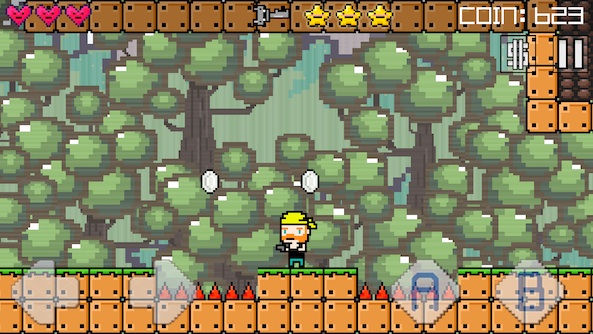 While we praise Apple (and, of course, other tech companies) for their advancements in technology, we also hold dear the games of our pixelated past. We may sit in awe of what 64-bit graphics can do on a mobile device, but our hearts still belong to 2-D gaming.

Legend Dary Classic is a simple side-scrolling 8-bit platform game that includes all of the mechanics you loved as a kid. There is only one view, the graphics are flat, and when you die, you start over…

If I didn’t know any better, I’d believe that this game was designed right from the pages of Super Mario Bros. There are biting monsters, raining clouds, deadly bats, and princesses to save. Our hero, Dary, may not be as honorable as Mario – he is more of the “what’s in it for me” Snake Plissken kind of mercenary – but he gets the job done just like those other guys.

The view is 2-D and side scrolling. All of the blocks, plants, and platforms are simple, flat line drawings with bold lines and single-color simplicity. Monsters and bad guys don’t do much other than move from one side of the screen to the other, but it only takes three hits to send you back to the beginning.

Players avoid damage by jumping over spikes, shooting monsters, and timing your attack exactly right. The baddies may not do much, but you’ll quickly discover that their awkward movements and huge size make them difficult to destroy.

There are 36 levels, each with different backgrounds. Sometimes, you’ll be spelunking through underground caves. Other times, you’ll be jumping sky high on top of the clouds. 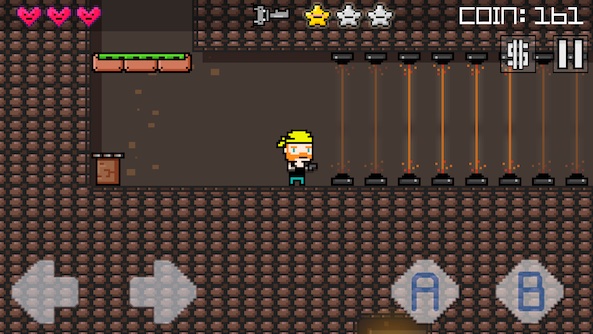 Players control Dary, a bearded mercenary with a gun. The king offers him his daughter’s hand in marriage if he will find the dragon’s horn. Dary’s response: “What if she is ugly?”

The game plays a lot like traditional side-scrolling platform games. Jump to collect coins that are above you. Shoot at enemies in front of you. Avoid spikes in the ground. In some areas, you can jump up from platform to platform and cloud to cloud. In other areas, you will need to drag your finger downward on the screen in order to drop to a platform below.

There are dangerous dog-like creatures, bats, and snails that will roll over you. Each bad guy has a certain number of hit points, so you won’t be able to take them down in a single shot. Plan your attack wisely. Some of the monsters can get to you from above, even though you can’t shoot upward.

On some levels, there is a vehicle that you can get into and travel around in. Unfortunately, you can still be damaged inside one of these transports. So don’t expect to be able to trample everything in your path.

You will also find yourself faced with obstacles like acid rain or laser beams. You must time your movement precisely in order to avoid being hit from above. If you get hit, your character will flash for a few seconds, letting you know that you are invincible for a very short period of time. Use that invincibility to quickly move through the obstacles in front of you.

Along the way, your goal is to collect three stars and find the key to unlock the exit. You will also collect coins that can be used to upgrade your weapons and armor.

The gameplay is fairly difficult. Not so hard that you give up in frustration, but hard enough to make you want to keep trying until you win. There is usually only one health bonus on each level and if you die, you have to start over from the beginning of the level each time. There are some enemies that are very difficult to kill. For example, bats come down from above, but you can’t shoot upward, so you have to wait until they are at eye level to attack. They usually don’t get that low until they are right on you, so you have to be in an area where you can back away from the bat as it comes at you. It is also hard to jump over bats because they will start to fly upward as soon as you jump.

This game may seem simple, but the gameplay is far from it. Killing bad guys, avoiding laser beams, and finding all of the stars before leaving the game is harder than it sounds. 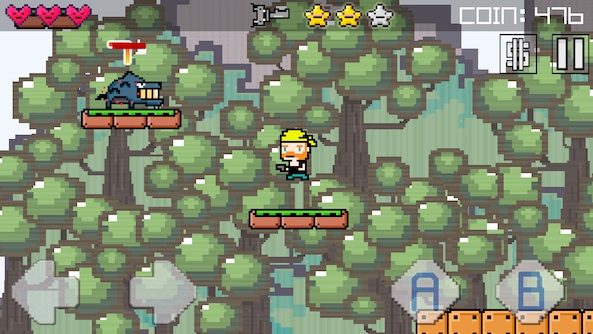 The basic gameplay sparks nostalgia for games of my childhood. Even the 8-bit soundtrack is catchy enough to sing along to when you are not playing the game. Levels are challenging, but not so difficult that you want to throw your phone at the wall.

The controls are not perfect. On the iPhone, the size and placement of the virtual movement buttons is great. However, the shoot button sometimes triggers the jump button and the left and right arrows will randomly not work. In a game where timing is very important, a split second delay in movement or a jump instead of a shot can destroy you.

Legend Dary: Classic costs $0.99. In a time when more and more games are costing two and three dollars, it is refreshing to see that you can play this game for such a low price. There appears to be a way to buy coins through in-app purchases, but I couldn’t find an in-game store. It is likely that the developer forgot to include that portion of the game when he coded it. As the summary says, ParkPill is a one-man game studio with “occasional help from a designer who is my wife,” so it is likely that some features slipped through the cracks before the game’s launch.

As side-scrolling platform games go, this isn’t the best one you will every play, but it does give you a sense of nostalgia for games gone by. For only $0.99, you get 36 levels and two big bosses in a game that is challenging enough to keep you trying. It is available for the iPhone, iPad, and iPod touch. Download it in the App Store today.

Lep’s World 3 is a side-scrolling platform game. Fist of Awesome is a pixelated game with a punch.

Do you like retro game? Or, would you prefer games with high-quality graphics and 3-D action?