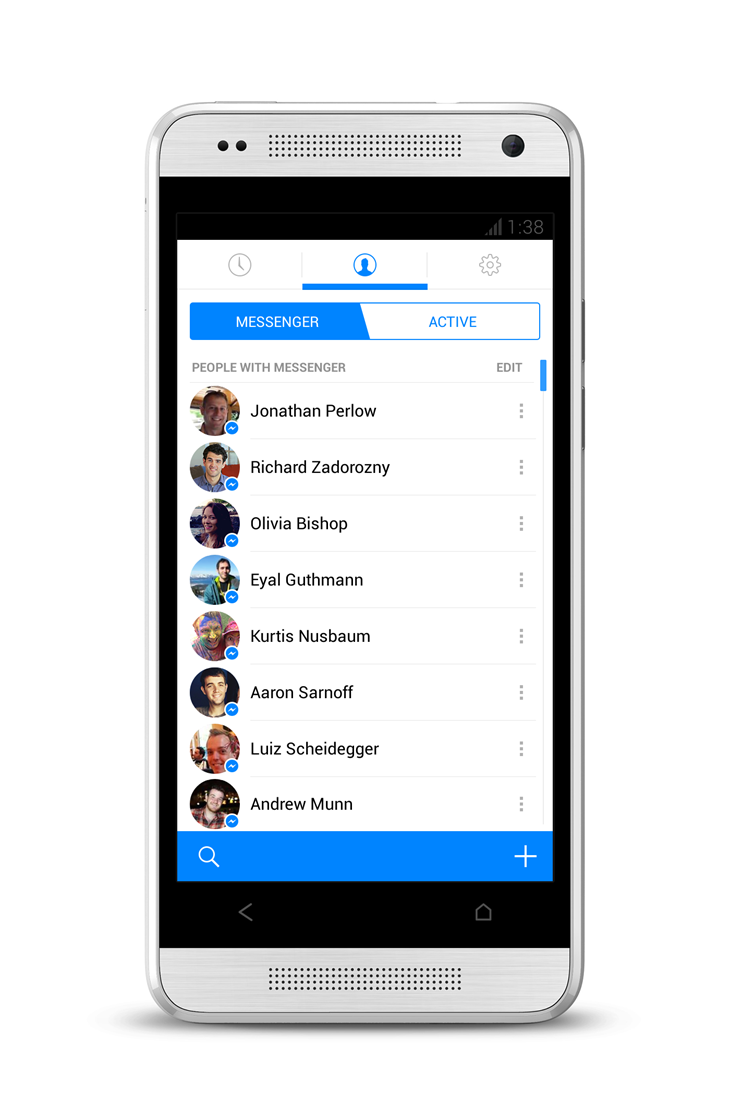 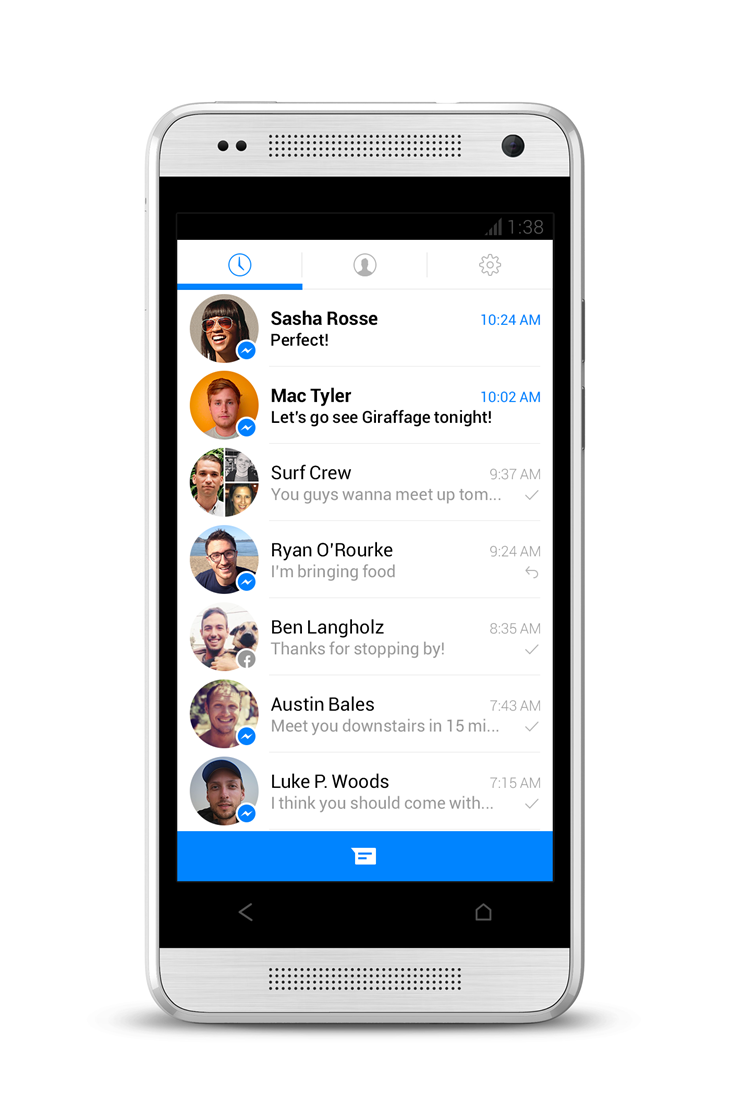 We were told last month Facebook had been working on a new version of its iPhone client with Graph Search and testing a major rethinking to the standalone instant messaging software, Facebook Messenger (a free download from the App Store).

Today, the social networking behemoth announced a new Messenger experience is now available for limited testing on Android and coming soon to iOS. Representing a major refresh, Messenger has undergone a substantial facelift and now lets folks instant-message each other using only their phone numbers, putting Messenger on a collision course with WhatsApp…

First and foremost, the app has dropped ‘Facebook’ from its name and shall be known henceforth as Messenger. The private build is currently available to a small number of people of Android as the new experience will be available for testing on iOS “in the coming weeks,” the firm said.

You’ll immediately notice the revamped and cleaned up appearance that’s now consistent across both platforms. Aside from a name change and visual makeover, there’s another far more disruptive change.

As you know, Messenger has supported SMS integration on Android for ages. But it now appears Apple fans needn’t look at their Android-toting friends with envy as Facebook confirmed plans to pull this capability from Android as “we made a big deal about the SMS feature and it just didn’t take off,” said a spokesperson.

According to The Verge which had a change to play with both versions, phone number integration is a key new feature which should allow for some fancy Kik/WhatsApp-like possibilities:

While Facebook won’t let you text a phone number from Messenger, the company plans to use phone numbers in a new way: to identify its users, just like in WhatsApp. Upon opening Messenger for the first time, it will ask you to provide your phone number.

Then, the app can match you with people whose numbers you have, but whom you aren’t Facebook friends with. Facebook guarantees your messages will reach somebody’s inbox if you have their phone number.

As for the visual changes adopted across iOS and Android builds, the streamlined Messenger experience will include left/right swipe gestures and circular profile images.

There’s also a blue badge next to contact names making it easier to figure out whether a friend is chatting using Facebook’s web interface or the Messenger mobile app, so you can be sure they’ll get notified instantly about your message.

Contacts who are chatting via the web interface are listed separately on the Active tab. 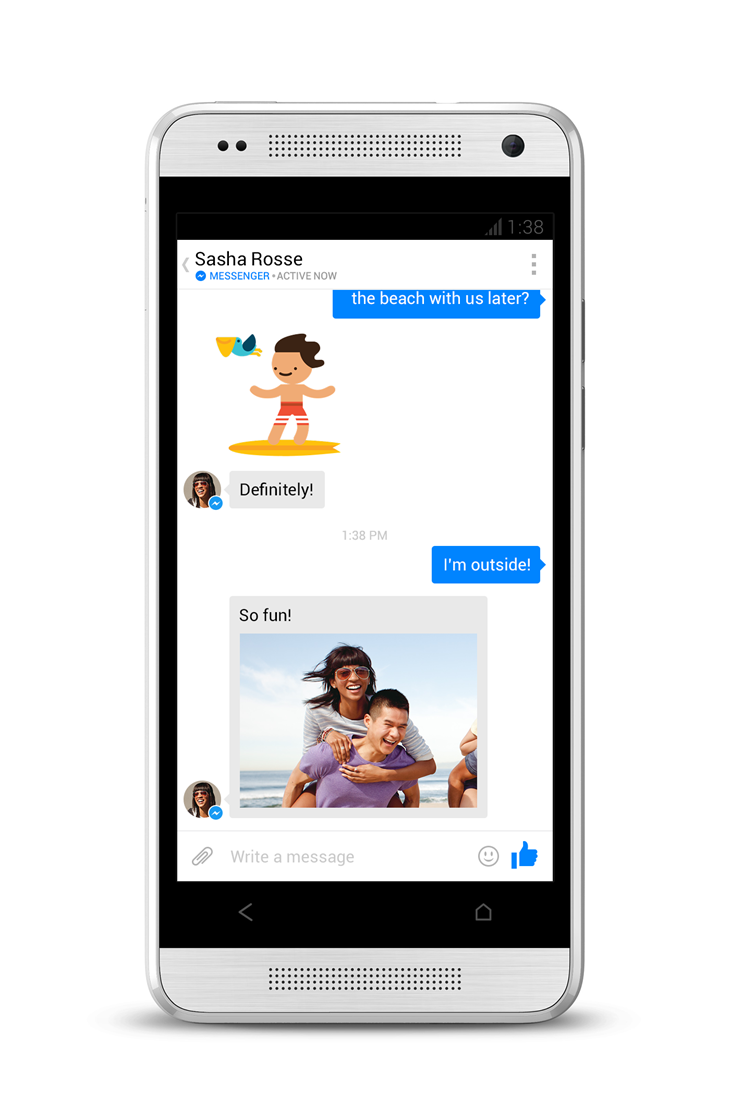 I’m also liking how the blue Send button fits in with iOS/Android conventions.

More importantly, the new Messenger even lets you instant-message non-users, via their phone number. I’m guessing this is going to be pretty popular with people who don’t have a Facebook profile, but want to be reachable to others through Messenger.

This capability requires a new setting for who can look you up using your phone number.

If you choose to use Messenger, you may be asked to adjust the setting for ‘Who can look you up by the phone number you provided?’ to Public so people who already have your phone number can reach you on Messenger.

Finally, a whole bunch of under-the-hood improvements and front end tweaks should ensure that the app runs smoother and sends/receives messages faster.

While we’re at Facebook, the Wall Street Journal just reported that executives for the struggling Canadian smartphone maker BlackBerry met with Facebook to – wait for this – gauge interest in a potential bid.

Although “it remains unclear whether Facebook is interested in placing a bid,” the very fact that BlackBerry execs would hop on a plane and fly to California highlights just how desperate the company is.

Facebook Messenger is available free of charge in the App Store.