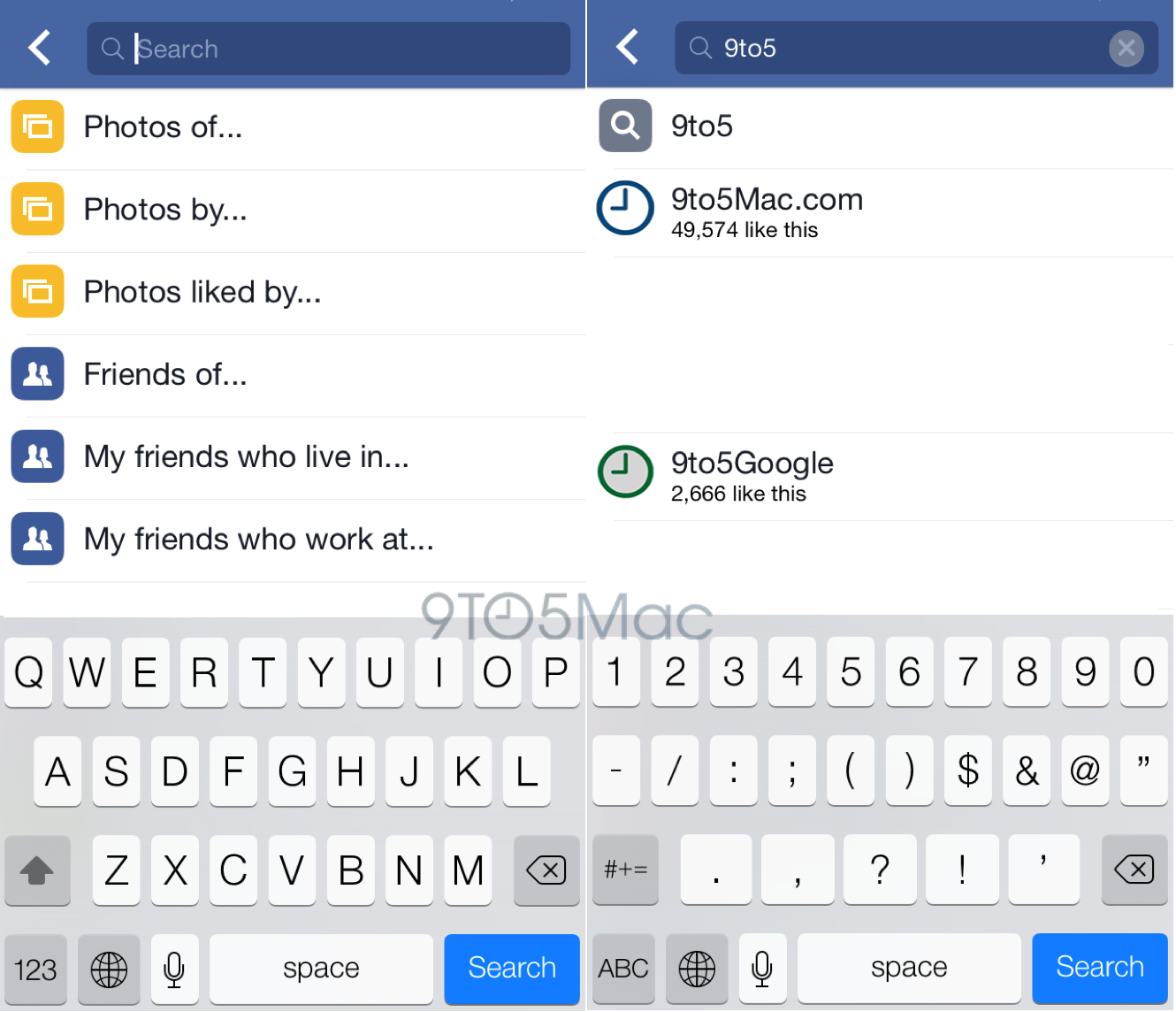 The social networking giant Facebook used to irk fans with its sluggish mobile clients that used to be second-class citizens on smartphones and tablets. Blame it on Zuck & Co. for taking the easy route by wrapping the mobile-optimized HTML code into “native” apps. That changed last year after Facebook hired a few former Apple engineers like Greg Novick and tasked them with rewriting these apps from the ground up to be snappier and more responsive than the web app disguised as a native one.

Mark Gurman of 9to5Mac was able to obtain a pair of work-in-progress screenies representing the upcoming Facebook iOS update. As you can see top of post, the biggest news will be the inclusion of the much talked-about Graph Search functionality.

Facebook rolled out the new Graph Search tool back in January, allowing users to search through Facebook’s massive amount of photos, people and connections. Last month, Graph Search got updated with the ability to search posts, status updates, photo captions, Notes, check-ins and other types of Facebook content.

It’s a powerful feature capable of finding results from a precise query, as opposed to a web search that returns general results to a general query. Facebook has never rolled out Graph Search to mobile so that should be the reason enough for anyone to upgrade.

In addition to Facebook’s iPhone and iPad client with Graph Search functionality incorporated into the app’s main search bar, the company is testing two new version of Messenger: one all-white iOS 7 style redesign and the other resembling Apple’s stock iOS Messages app.

The first version is said to look largely similar to the Messages application bundled into iOS. That version includes green interface elements. The second version in testing, which the source says is more likely to ship to end-users, is heavy on white space and very fitting for iOS 7′s design. It is not filled with blue interface elements like the new Facebook app.

Both new Messenger versions are said to contain a revamped Home screen icon (a blue chat bubble with a white border) and tabs for active and recent chats, contacts and settings across the bottom.

The new Messenger for iPhone should also use iOS Contacts “to find friends capable of being messaged via Facebook’s system.” This contacts integration might resemble SMS fallback in Apple’s iMessage, though it sounds like a far cry from the OS level integration of Facebook Messenger on Windows Phone.

The aforementioned Facebook and Messenger features are being concurrently developed for Android devices, too, the report has it. I’m very much looking forward to both redesigns.

While the current blue theme is nice and the UI is clean, Facebook feels out of place on iOS 7. It’s definitely a high time Facebook moved away from the blue theme in favor of OS-specific appearances.

Just because Zuckerberg suffers from red-green colorblindness and sees the color blue best doesn’t mean the rest of us should be held victim of his preferred color scheme.