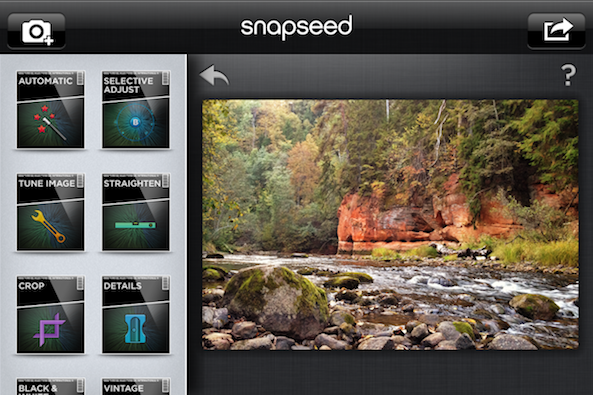 As the leaves turn from green to bright yellow and red, the fall is one of the best times of the year for landscape photography with the iPhone. When ordinary landscapes change into magnificent vistas, it’s really hard not to take photos of all that beauty.

However, when you look back at your photos, you’ll often be disappointed to see that the iPhone hasn’t reproduced the fall colors as you expected, and the photos just look boring in comparison to the same scene in real life. Fortunately, this can be corrected in post-processing, and in this article I’ll show you a simple Snapseed post-processing workflow that will bring your fall photos back to life by making their colors much more vibrant.

While the fall is well on its way in most of Europe and North America, other parts of the world have different seasons. It’s spring in Australia and permanent summer in tropical regions. However, the same editing workflow can also be used to greatly improve sunset photos, so you should also give it a try if you live in other parts of the world…

Here is the photo that I’ll be using for this editing workflow. Since I took this photo in early fall, the leaves are rather pale, but you can already see that the trees in the background have different tones, which I want to emphasize more in post-processing. 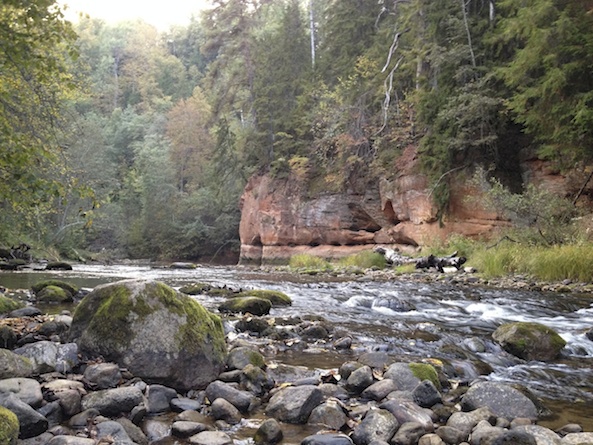 The three most important subjects in this image are the river, the large orange rock, and the regular rock at the bottom left. They are all located within a relatively narrow area in the central part of the photo, which means that I could emphasize them more by cropping the image into a 3:2 aspect ratio (the iPhone shoots in 4:3 aspect ratio). 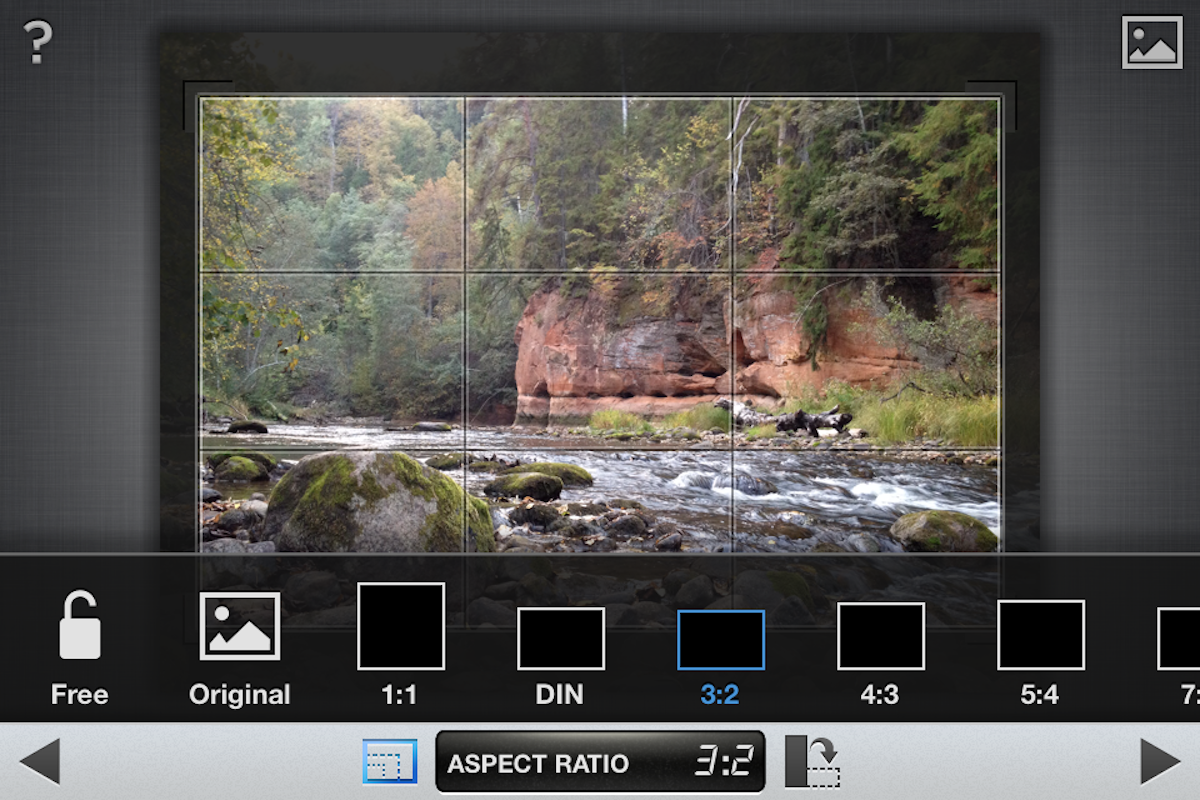 To do this I opened the “Crop” module in Snapseed, selected 3:2 in the aspect ratio panel at the bottom, and adjusted the composition until I found something that I really liked. 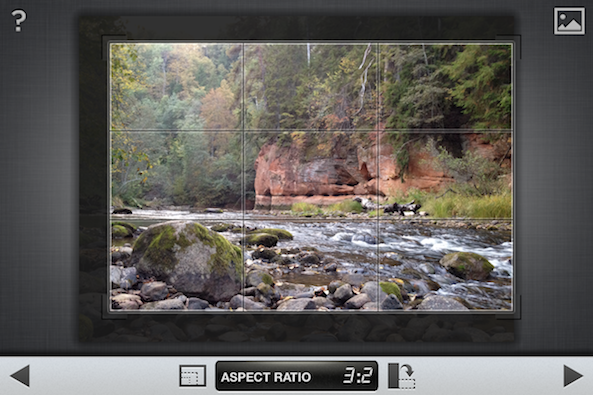 Next I opened the “Details” module and increased structure to +20, which helped me make the different details in the photo stand out more. This works particularly well for trees in the background, which are now better defined and stand out more. However, you want to be very careful with the structure adjustment as it looks really bad if you do it too much. 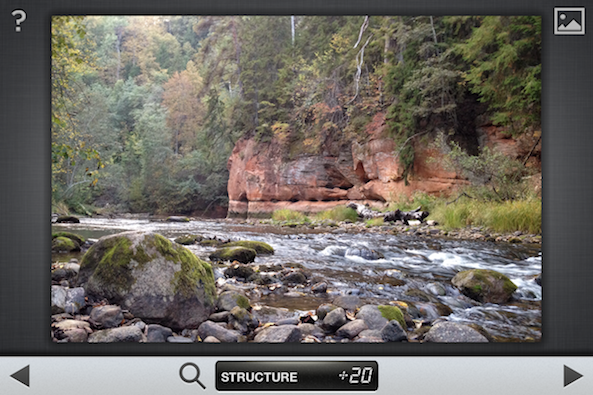 You can find the structure adjustment by sliding up and down the screen, and change its value by sliding the screen horizontally. Once you’re happy with the adjustments, you can apply them using the arrow icon at the bottom right.

“Tune image” is the most essential module in Snapseed since it allows you to do all the important color adjustments. There are five different adjustments in this module, and it can take a bit of playing around until you find the best combination for each image. 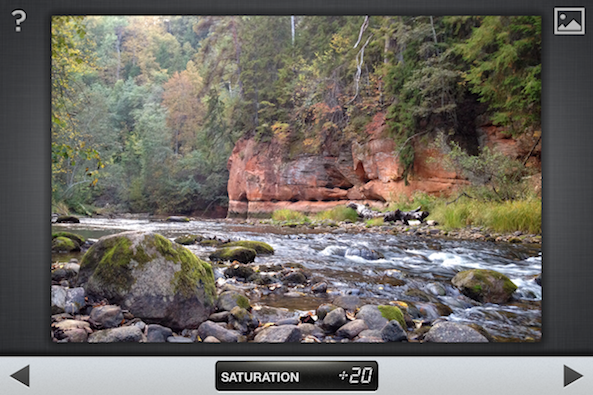 I started by increasing saturation, which makes all the colors in the image more vibrant, which is exactly what we want for a fall photo. However, I only increased saturation to +20 since I also have many other color adjustments in mind. 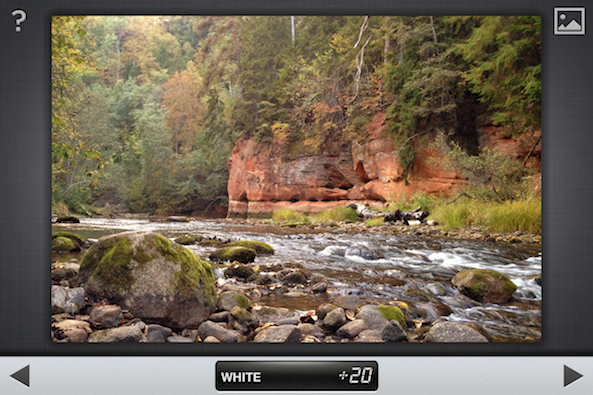 Next I adjusted white balance, which essentially changes how warm or cold the image is (a warm image is yellowish, a cold image is blueish). For this image we want yellowish rather than blueish tones, which I added to the image by increasing white balance to +20.

My next adjustment was contrast, which determines how different the highlights (the bright parts) are from the shadows (the dark parts). Most photos can be improved by increasing their contrast a little. However, you also don’t want to lose any detail in the shadows or highlights by making them completely black or completely white. 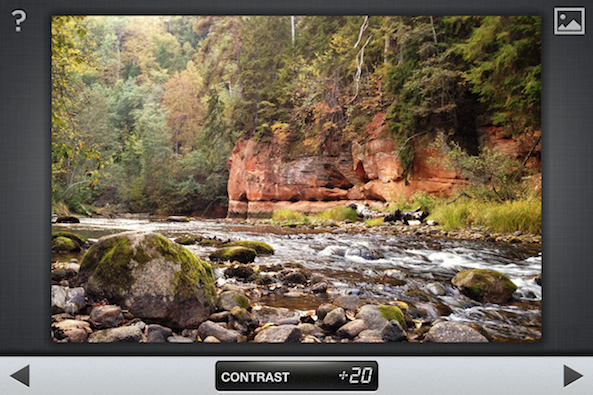 For this image I increased contrast to +20, which made it much more pleasing to the eye while at the same time not losing any important detail in the highlights or shadows.

Next I adjusted ambiance, which is one of the most powerful features of Snapseed. In a nutshell, ambiance brings out the mid tones of the photo and thus emphasizes details that would not stand out as much otherwise. Ambiance also makes colors more vibrant, but like with any Snapseed adjustment, you’ll run into issues if you do it too much. 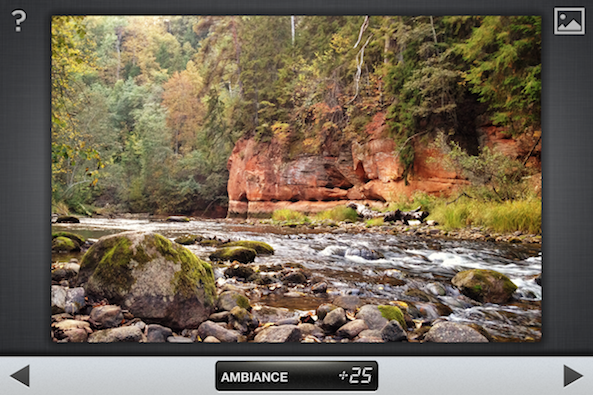 In this case I increased ambiance to +25, which emphasizes detail in the trees, makes the photo more evenly exposed, and also makes the colors more vibrant. 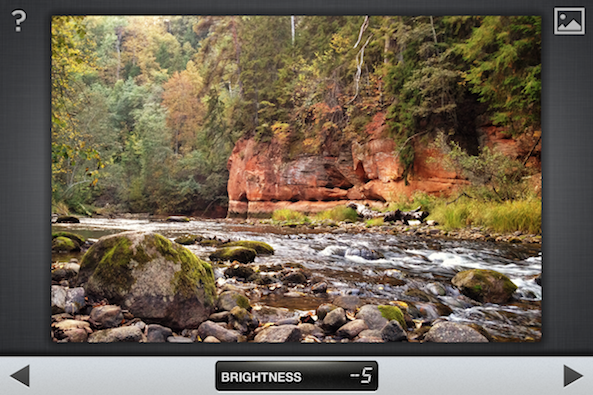 Finally, I decreased brightness to -5 to make the image more compelling without making it too dark. In case you’re wondering how to pick the exact adjustment values, the answer is really simple. You just have to keep changing things until you find something you really like, even if it means jumping back an forth between different adjustments.

Now, at this point we could already save the image to camera roll as what we have now is so much better than the photo we started with. The trees are now beautifully colorful, there is more contrast, and the image is just so much more pleasant to look at.

But there is one more thing I still want to do with this photo. If you look at the image, the first thing you’ll notice is the unusual orange rock on the other side of the river. Even though this rock already stands out a lot, we can make that rock even more unusual by making it’s orange tones even more orange without affecting the rest of the image.

To do this I opened “Selective adjust,” tapped the plus icon at the bottom, and added an adjustment point to the central part of the orange rock. As you move the adjustment point around, you’ll see a magnifying glass with an aim in the middle. Your goal is to aim exactly at the tones you want to adjust, so make sure that the tone encircling the magnifying glass is roughly the same as the tone that you want to apply adjustments on. 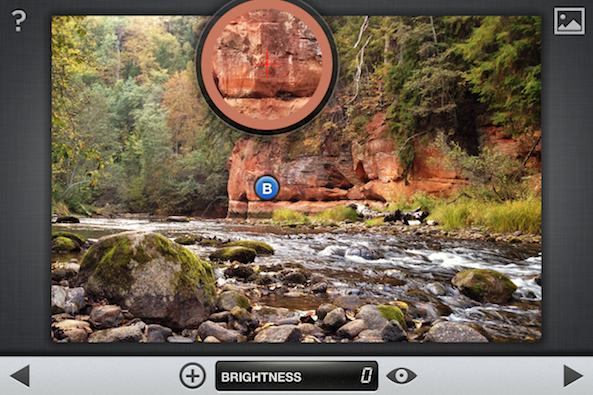 When you get the tone roughly right as I did in the screenshot above, you want to resize the adjustment area by pinching two fingers in and out. Everything that gets highlighted in red will get adjusted, while the rest of the image will remain unchanged. 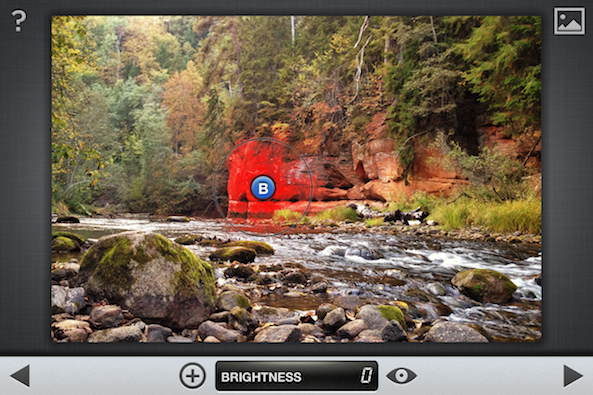 I changed adjustment area so that only the left side of the rock is highlighted, and now I can change the brightness, contrast and saturation just for that part of the image. To make the orange rock even more orange, I increased the saturation of the rock to +40. 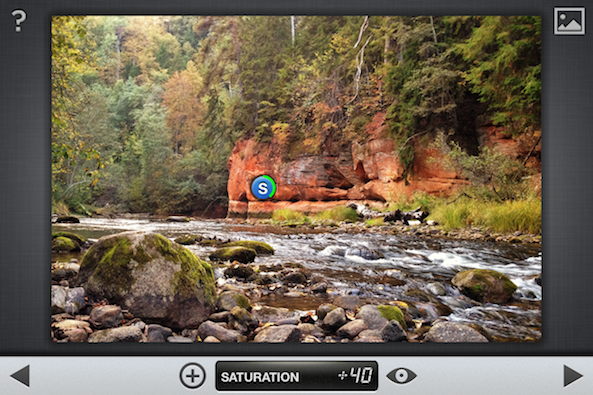 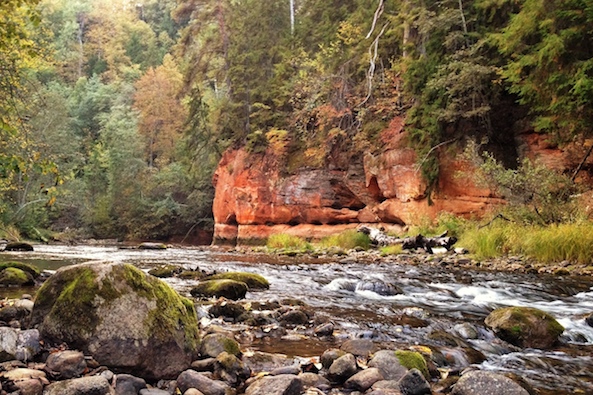 If you like what we were able to do with this image, try using the same workflow for your own fall (or sunset) photos to see how much you can improve them. While you may have to pick different adjustment values for your photos, the workflow described in this article can make your fall photos look as good – if not better – as the scene looks in real life.

Emil Pakarklis is the founder of iPhone Photography School, a website that helps people take better photos with the iPhone.