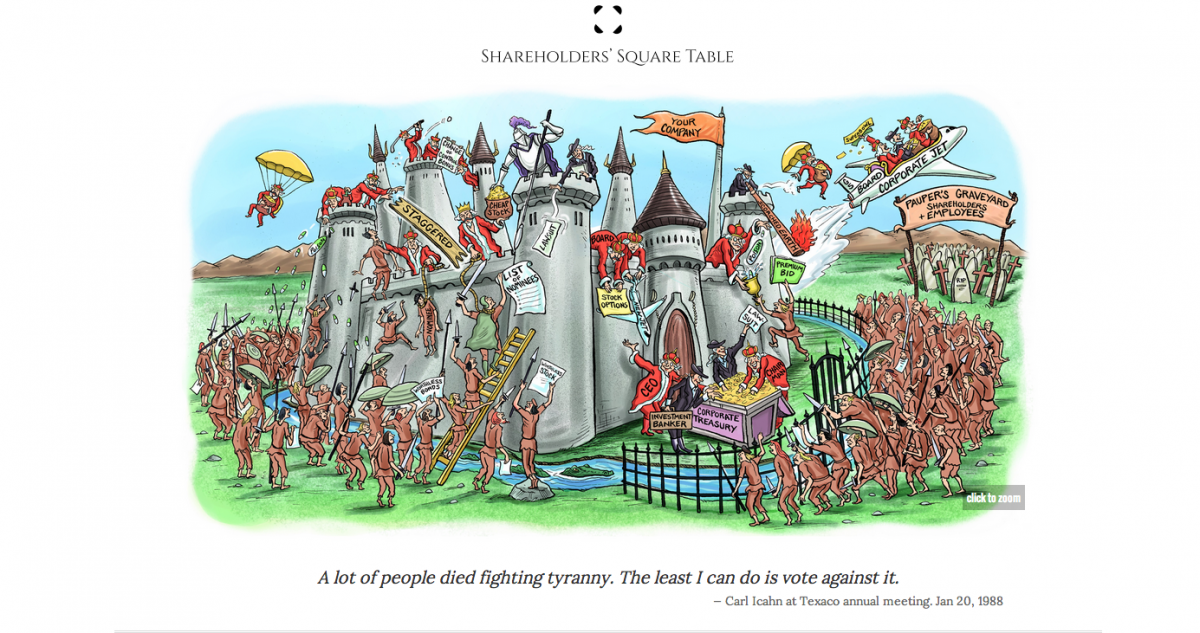 If you run a multi-billion dollar corporation and your secretary tells you activist investor Carl Icahn is on line 2, the very thought of that should send chills up your spine. Icahn is known for his ominous “increase shareholder value” mantra and stops at nothing to put forward massive corporate stock buyback programs, even pushing for board and CEO changes if need be.

Yesterday, Icahn tweeted he “just sent a letter to Tim Cook” concerning Apple’s buyback program. And now, the contents of the letter has been published on his newly launched website called the Shareholders’ Square Table.

Should Tim Cook be worried? Read on…

The letter opens with a friendly reminder: “When we met, you agreed with us that the shares are undervalued”.

He goes on to say Apples “irrational undervaluation as dramatic as this is often a short term anomaly,” casually hinting that the opportunity for a larger buyback “will not last forever”. He then says Apple should distribute a much larger portion of the $147 billion of cash sitting on its balance sheet to shareholders.

The message basically boils down to Icahn pushing Apple to commence an immediate tender offer for a massive $150 billion stock buyback at the current price of $525 per share.

That’s in addition to Apple’s existing $60 billion share repurchase program over three years. There’s “nothing short-term” in his intentions, he said while proposing that Apple finances the entire $150 billion buyback with debt at three percent interest.

We’ll be talking more about the website and Apple with @ScottWapnerCNBC Wapner at noon on CNBC.

Here’s Carl’s message to Cook in its entirety:

It was a pleasure meeting you for dinner at the end of September. When we met, my affiliates and I owned 3,875,063 shares of Apple. As of this morning, we owned 4,730,739 shares of Apple, an increase of 22% in position size, reflecting our belief the market continues to dramatically undervalue the company, even when taking into account the recent market appreciation, which in turn makes our proposal unchanged with respect to a $150 Billion buyback. We were pleased to hear at our dinner that you appreciated our input and that you would speak to us again in three weeks to continue the dialogue. In anticipation of doing so soon, we aim to reiterate in this letter the point of view already expressed to you directly with the hope of effectively summarizing it for the company’s board of directors and our fellow shareholders.

From our perspective, Apple is the world’s greatest consumer product innovator and has one of the strongest and most respected brand names in history. We consider Apple to be our most compelling investment. I first informed my followers on Twitter on August 13, 2013 of my “large position.” I also expressed to you my opinion that “a larger buyback should be done now.” At that time, we owned 3,448,663 shares and the stock price was $467. Since then we have purchased an incremental 1,282,076 shares (bringing the total value of my position to $2.5 Billion) and we currently intend to buy more.

We want to be very clear that we could not be more supportive of you, the existing management team, the culture at Apple and the innovative spirit it engenders. The criticism we have as shareholders has nothing to do with your management leadership or operational strategy. Our criticism relates to one thing only: the size and timeframe of Apple’s buyback program. It is obvious to us that it should be much bigger and immediate.

When we met, you agreed with us that the shares are undervalued. In our view, irrational undervaluation as dramatic as this is often a short term anomaly. The timing for a larger buyback is still ripe, but the opportunity will not last forever. While the board’s actions to date ($60 billion share repurchase over three years) may seem like a large buyback, it is simply not large enough given that Apple currently holds $147 billion of cash on its balance sheet, and that it will generate $51 billion of EBIT next year (Wall Street consensus forecast).

The S&P 500 trades at roughly 14x forward earnings. After backing off net cash, Apple trades at just 9x (not factoring into account that the company has a significantly lower cash tax rate than the rate Wall Street analysts use). This discount (cash adjusted) becomes even more compelling given our confidence that Apple will grow earnings per share at a rate well in excess of the S&P 500 for the foreseeable future. With such an enormous valuation gap and such a massive amount of cash on the balance sheet, we find it difficult to imagine why the board would not move more aggressively to buy back stock by immediately announcing a $150 Billion tender offer (financed with debt or a mix of debt and cash on the balance sheet).

While this would certainly be unprecedented because of its size, it is actually appropriate and manageable relative to the size and financial strength of your company. Apple generates more than enough cash flow to service this amount of debt and has $147 billion of cash in the bank. As we proposed at our dinner, if the company decided to borrow the full $150 billion at a 3% interest rate to commence a tender at $525 per share, the result would be an immediate 33% boost to earnings per share, translating into a 33% increase in the value of the shares, which significantly assumes no multiple expansion. Longer term (in three years) if you execute this buyback as proposed, we expect the share price to appreciate to $1,250, assuming the market rewards EBIT growth of 7.5% per year with a more normal market multiple of 11x EBIT.

It is our belief that a company’s board has a responsibility to recognize opportunities to increase shareholder value, which includes allocating capital to execute large and well-timed buybacks. Apple’s Board of Directors does not currently include an individual with a track record as an investment professional. In my opinion, any further delay in executing the buyback we hereby propose will reflect this lack of expertise on the board. My firm’s success and my expertise as an investor would be difficult for anyone to argue. Per my investment thesis, commencing this buyback immediately would ultimately result in further stock appreciation of 140% for the shareholders who choose not to sell into the proposed tender offer. Furthermore, to invalidate any possible criticism that I would not stand by this thesis in terms of its long term benefit to shareholders, I hereby agree to withhold my shares from the proposed $150 Billion tender offer. There is nothing short term about my intentions here.

According to CNBC’s tweet, Icahn now owns 4.7 million shares of Apple, which is up from roughly four million shares he owned before. This means the billionaire investor now owns $2.5 billion worth of Apple shares.

The way the letter is worded, it would seem that Carl is not playing around.

Then again, Tim Cook can’t exactly be pushed around either.

Well, would you be concerned if you were standing in Tim Cook’s shoes?