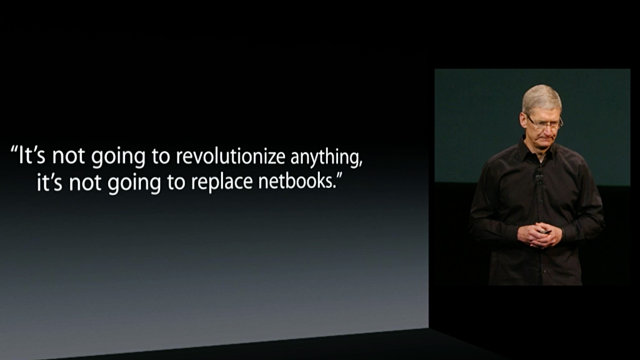 Normally, selling 170 million of anything is cause for headlines, but everyone isn’t Apple. When CEO Tim Cook said Tuesday the tech giant has sold 170 million iPads to date, analysts forecast sales of fifteen million tablets during the September quarter, at a minimum.

If correct, the predictions would top the fourteen million iPads sold during the same quarter of 2012. For Apple, the expectations could also counter the belief that demand for its tablet computers are slowing…

Maynard Um of Wells Fargo, gave investors just a slightly lower figure, projecting the iPad maker sold 14.9 million tablets during the quarter, an uptick from his forecast for 14.6 million during the September period.

In an odd moment Tuesday, Apple criticized an IT blogger to pump up the iPad’s progress. The blogger’s 2010 quote that the iPad “is not going to revolutionize anything, it’s not going to replace netbooks” floated on a giant screen behind Apple’s boss during yesterday’s keynote.

“Who remembers netbooks?” Cook then asked the audience.

Turns out, the blogger, Bruce Berls, actually liked the tablet, according to Fast Company.

Analysts are awaiting for next Monday when Apple is expected to release its quarterly earnings report. Topping the numbers on everyone’s list is how many iPhones sold during the period.

For what it’s worth, Apple had said it sold a record 9 million handsets for the first three days the iPhone 5c and iPhone 5s were available.