In addition to its wide range of other application updates today, Apple has posted a new edition of iTunes this afternoon. The update brings the content management software to version 11.1.2 and includes a handful of improvements.

Easily the biggest change in iTunes 11.1.2 is its support for OS X Mavericks, the big update Apple released today for its desktop operating system. But it also includes new language support and improved performance and stability…

Note that this isn’t a must-have update, particularly for folks who don’t have a Mac or don’t plan on updating to Mavericks. For those that have updated, though, you’ll probably want to include this in your list of maintenance tasks today. 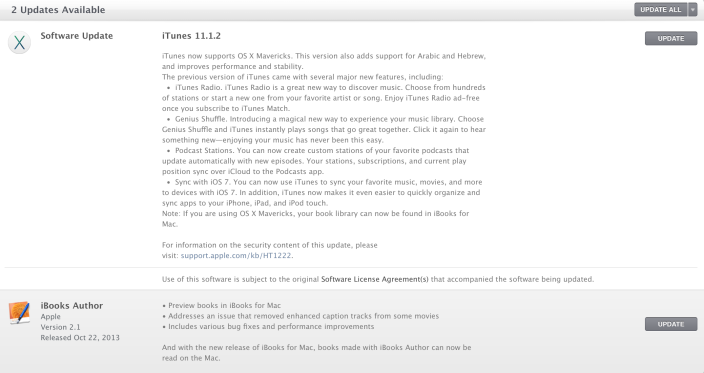 You’ll notice that Apple has also released a new version of iBooks Author, which as you can see in the image above includes a new Preview Books feature for Mac, and a few bug fixes. Users of iBooks Author can find the update in the Mac App Store.

Folks looking to grab the newest version of iTunes can find it either on Apple’s website, or via the Mac App Store’s ‘Updates’ tab. If you have a Mac and would like to learn more about today’s Mavericks update, click here. It’s free and available now.