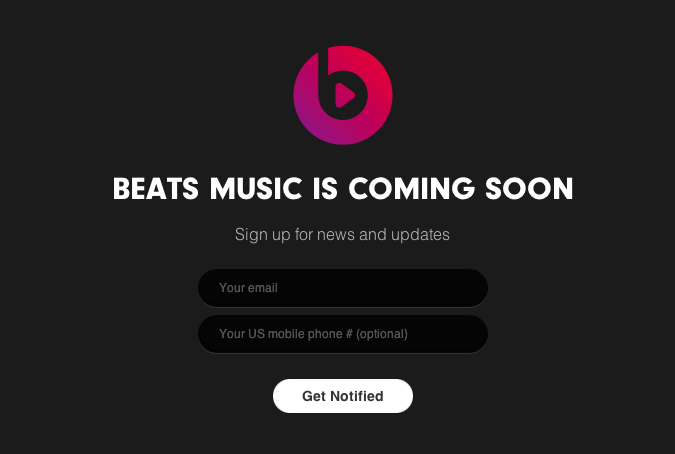 You can put Beats Music on your ever-expanding list of streaming music service as its CEO Luke Wood confirms to The Next Web that the company will enter the highly-competitive space in the United States “within the next few months”.

Based on its July 2012 $14 million acquisition of another music streaming service, MOG, Beats Music will focus on human-curated playlists compiled around a particular artist, activity or the general mood of the listener.

According to The Next Web, Beats Music will be accessible on the web and across mobile apps for iOS and Android devices. They are also working on a Windows 8 app that should be due at a later date.

We’re talking about real depth of personalization and knowing who I am, who you are, what we’re listening to, what we like, what we’ve listened to before and then offering up music that is highly relevant to our taste profile.

You need to start with a great editorial team that has a point of view, but we want to have a situation where we can really scale to the depth of your appetite.

If you really love music, we want something that can go deep with you for a really long time. And that requires a perfect harmony between the algorithm and human curation. Between the man and the machine.

You can register your interest on the Beats Music landing page (they’re also hiring). The launch will initially be limited to the United States.

Beats Music will be competing with established incumbents, not just the iTunes juggernaut and Apple’s new iTunes Radio streaming service but also against the likes of Rdio, Pandora, Spotify, Sony’s Music Unlimited and of course Google’s Play Music All Access, to name just a few.

Earlier this month, Apple said over eleven million unique listeners tuned in to iTunes Radio since its arrival as part of the September 18 iOS 7 launch. iTunes Radio is available via desktop iTunes on Mac and Windows PCs, iOS 7 devices and on Apple TV boxes running the recently-released Apple TV 6.0 software update.

Apple’s service is for now available only to US residents, but will likely expand soon into other markets such as Canada. The free service is supported by advertising (unless you have a $24.99 a year iTunes Match subscription) and allows for up to six song skips per station per hour.

iTunes Radio also taps Apple’s Genius feature to create a station based on a song.

According to Apple’s SVP of Internet Software and Services, Eddy Cue, the team wanted to “present radio stations for the first time to a customer that’s really tailored” to listeners.

In other music related news, Spotify today turned five so the company shared some interesting up-to-date stats, revealing the $9.99 a month service now has more than six million paying subscribers and over 24 million active accounts.

Rival Rdio said it will soon launch free Stations service across mobile apps designed to stream music based on people’s tastes and their music listening patterns.