The beat goes on for primo patent troll Lodsys. Apple’s attempt to intervene in a concerted clipping of iOS developers failed after a patent-owner friendly judge dismissed the tech giant’s legal motion. U.S. District Judge Rodney Gilstrap in East Texas ruled Apple’s motion “is far outside the scope” of his courtroom.

The decision effectively opens the door to Lodsys settling all cases with defendants, thereby ending a 2011 effort by Apple to shield hundreds of thousands of individual iOS developers from being sued for patent-infringement by Lodsys…

The iPhone maker argued that its technology license also covered use by developers. In its mostly sealed arguments, Apple charged the patent trolls’ claims against numerous developers were “substantially identical” to Apple technology.

Instead, Lodsys carried out a practice of going after developers, then settling cases “quickly and cheaply,” according to Apple. Instead of recognizing the broader issue of patent trolls depressing the technology market, the judge ruled the case moot. In equating developers with defendants Gilstrap noted Lodsys had already settled with the seven named defendants.

Thus, even assuming that all the named defendants had not been dismissed from the case and Apple’s claim proceeded to trial, any judgment subsequently rendered would be limited in scope to those named defendants, and not, as Apple urges, apply to all Apple developers.

Just between April and May, Lodsys filed 20 lawsuits against both iOS and Android developers. Because “there are more than 6 million developers of iOS-based apps, the potential number of such claims is virtually limitless,” Apple charged in the motion.

“A claim covering six million unnamed app developers is far outside the scope of the instant action,” the judge countered, suggesting the tech giant directly sue the troll. 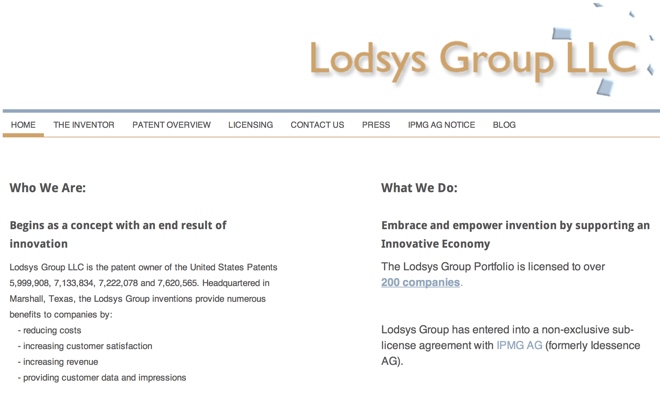 Martha Stewart is doing just that.

See, Lodsys wants Martha Stewart Living Omni Media to pony up $20,000, or $5,000 for each iPad app. In response, Stewart hit Lodsys CEO Mark Small where he lives: Wisconsin. This could be a smart tactic, given Lodsys HQ is in Marshall, Texas, home of courts that never saw a patent claim they didn’t like.

One might think $20,000 is just a mosquito to corporations – and that is the business plan for trolls such as Lodsys. Electronic Frontier Foundation lawyer Daniel Nazer wrote in an amicus brief:

Lodsys’s pattern of sending out demand letters, suing a seemingly random sampling of app developers and then settling with those app developers, promises that those developers’ claims of a right to use the technology in question will never be heard.

The other U.S. District judge handling patent cases for that area?