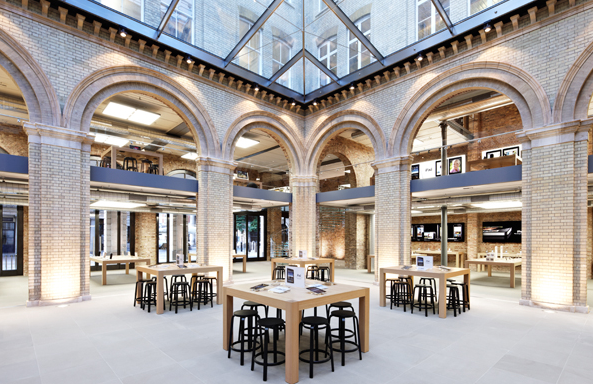 Apple once again leads the list of brands viewed as cool in the UK. In its twelfth annual CoolBrands Top 20 survey suggesting an improving British economy, the iPhone ranks No. 1 among luxury brands such as Aston Martin, Rolex and Bang & Olufsen.

The California-based gadget maker was able to shrug off stiff competition from 10,000 independent brands to retain the top spot. Android’s Google dropped to the fifth spot with YouTube and Twitter also falling position. Microsoft’s Skype even dropped out of the top 20, according to the Coolbrands rankings…

It wasn’t long ago that Apple held the No. 2 spot and the head of the CoolBrands Council is unsure how long the Cupertino, Calif. company can retain its crown. CoolBrands also counted about 3,000 public votes online.

“Apple remained No. 1 this year but it’s debatable how long it can hold this position in the face of an increasingly competitive set of rivals,” chairman Stephen Cheliotis told The Independent.

Other digital brands fell down the charts, however:

Voters were asked to focus on style, innovation, originality, authenticity, desirability and uniqueness.

Some of Apple’s competitors may dispute the award.

Samsung, for instance, has tried for some tied to wrest the coolness crown away from Apple. The South Korean firm aired ads depicting Apple fans as an aging demographic, while Galaxy smartphones attract stares from the hipsters.

Others have asked whether Apple has lost its coolness to Android or Microsoft.

Despite the questions, however, Apple’s long success only breeds copycats.