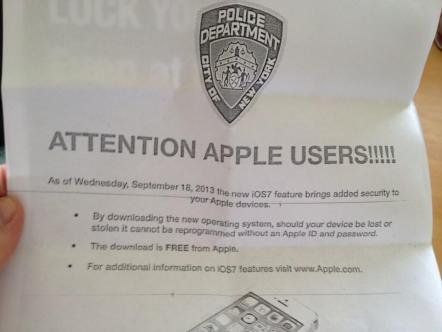 The above image was posted to Twitter yesterday by World Bank’s Jim Rosenberg, with the caption: the New York Police Department has a message for you iPhone and iPad folks.

Apparently, the NYPD has been handing out fliers at subway exits and in front of Apple Stores, encouraging people to upgrade to iOS 7 for its new ‘Activation Lock’ security feature…

In a city where the crime rate spiked last year due to mobile device thefts—particularly those with a fruit on the back, it’s not surprising to see New York Police spreading the word about iOS 7.

For those unfamiliar with the Activation Lock feature in iOS 7, it’s exactly what it sounds like. It keeps criminals from activating your iPhone on a carrier, or otherwise reprogramming it, without your Apple ID and password.

Here are a few more tweets from New Yorkers:

NYPD cops are in front of Apple stores passing out flyers telling me to update my iOS. Corporation and government never felt so united.

Four uniformed NYPD officers were at my subway stop tonight asking me to upgrade to iOS 7. Not a joke! pic.twitter.com/CGdR2RqtKJ

It remains to be seen how effective it will be in thwarting iPhone thefts, but as you can see, officials seem fairly confident. In addition to the NYPD, San Francisco DA George Gascón is also urging users to install iOS 7.