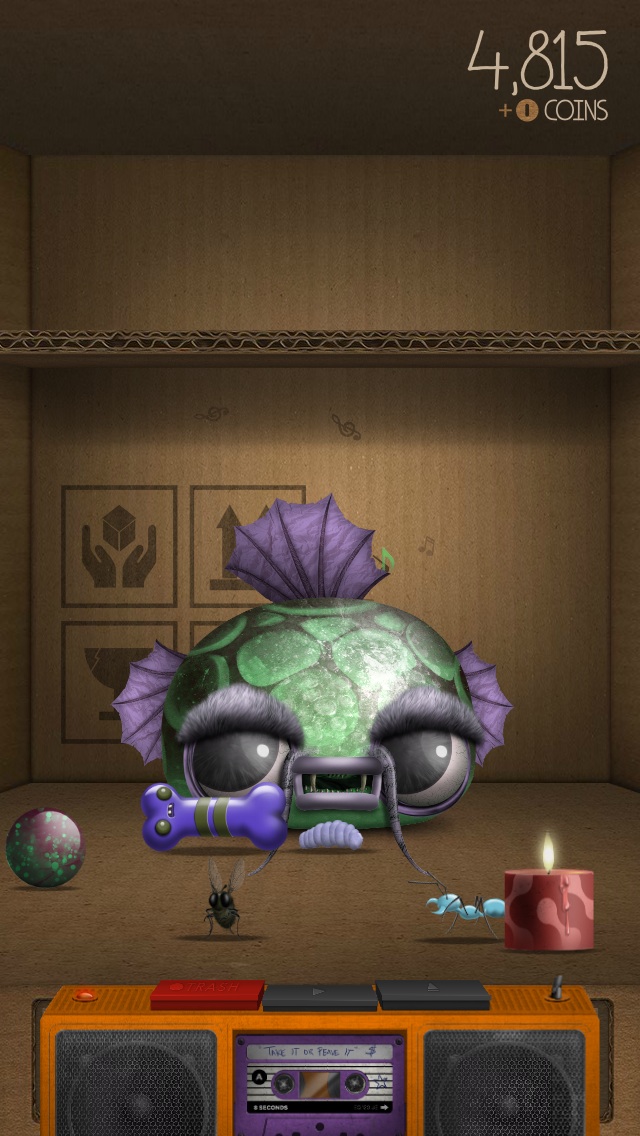 In the mid 1990s, digital virtual pets like Tamagotchi were hooked to the belt loop of every kid in elementary school. By the late 1990s, toy companies were looking for ways to improve on the pet simulation craze that had swept the nation. That is where Digimon came in. These adorable digital monsters did more than eat, sleep, and poop. They fought other monsters and it was cool.

Pet Peaves Monsters is very similar to the digital pet craze of the 1990s, complete with fighting monsters that battle others head-to-head across devices in a multiplayer arena, and it’s cool…

The graphics are cartoonish and cute, but not so cute that your 10-year-old boy would turn his nose up at it. The monsters start out as bug-eyed blobs that make baby sounds and giggle a lot. However, once they reach adulthood, they’ve grown horns, scales and all manner of monstrous additions. Plus, they barf up poison and spit venomous blood during battles.

Each Peave gets its own cardboard box. New boxes are unlocked as you play the game and reach certain achievements. While you are growing your adorably monstrous pet to adulthood, the color of the bugs that you feed it affect what it will look like fully grown. You won’t know what type of monster you’ve picked until it breaks out of its pupa cocoon.

Peaves grow stronger by eating bugs, listening to music, playing catch, and more. Increase its stats in speed, attack, and defense to nurture a winner. Feed your Peave a mushroom before sending it to battle to get a bonus attack against others.

The game’s controls are simple. Drag an item to the monster to interact with it. You can feed it bugs and mushrooms, play catch with it, bounce a toy around to entertain it, let it sniff a fragrant candle, play music in a tape deck for it, and more.

When in battle, your Peave’s success is solely based on its stats. The only action you will perform during the fight is triggering one mushroom bonus attack. Everything else is up to your Peave. 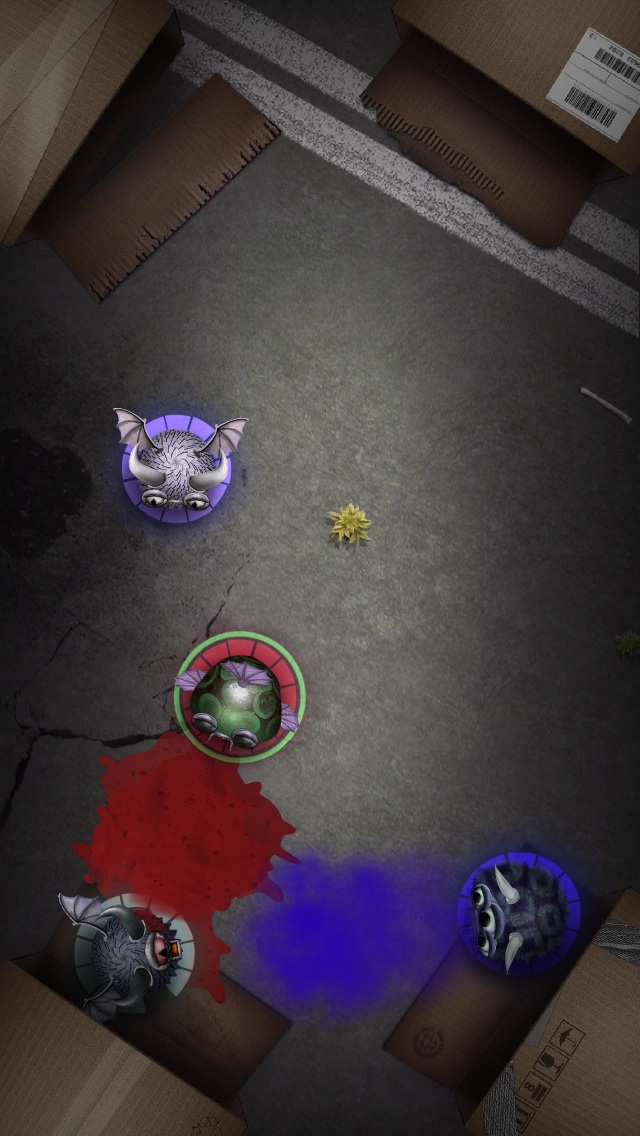 The first thing you will do is pick a Peave. The “Pet Shop” has a selection of larva. These one-eyed transparent blobs come in a variety of colors, but that is the only thing that distinguishes them from each other. Tap one and drag it to the “Buy” button at the bottom right corner of the screen. Peaves are completely free.

These little ones need to be fed immediately. Baby Peaves only eat larva. You can influence the color changes that will take place as your pet grows by feeding him certain colored bugs. After feeding your baby monster three larva, he will be ready to transform. Shake your device to trigger the next stage of his development.

He will transform into a toddler next. As a little tyke, he will begin to take on features that will stay with him until he is an adult. For example the “Lazurus Snakonus” has three eyes from his childhood on.

As a toddler, your Peave will want to play with toys. These can be anything from a squeaky bone to a wind-up mouse. Go to the Pet Store to buy a toy. Different toys increase different stats. Toys cost 25 or 50 coins each. Don’t worry. You will start out with 5,000 coins and you earn more each time you win a battle. It is very difficult to run out of coins in this game. Especially when your cardboard box only allows for 10 items at a time.

After you’ve played with and fed your toddler, he will be ready to grow into kid. As a kid, he will need some training to prepare for battle. Buy him a bouncing ball and play catch with him. Different types of balls increase different stats. He will make a cute growling sound and try to catch the ball in his mouth. He starts out getting hit in the head a lot, but after a while, gets better at playing games.

With enough training and a few more bugs, your youngster will turn into a teenager. The teens love to listen to music, so buy a mix tape in the Pet Store. There are three tapes to chose from at first. Each one plays a different type of music and increases a different stat.

After spending a few minutes getting its groove on, the Peave will be ready to become an adult. Give the device another shake and it will go into a pupa stage. This only lasts a few seconds and you’ll need to shake your device again.

Finally, your big-eyed blob will be a full adult, complete with teeth, horns, wings, or whatever monster features he is supposed to have. As an adult, the main thing your Peave wants to do is fight.

Shake your device when your Peave is ready and you will be taken to the battle arena. If you are alone, your Peave will be entered into a four-monster battle against computer-generated opponents with similar skills. If you have a friend nearby that is also raising Peaves, you can link up your devices using local Wi-Fi to compete against each other in a cross-device arena. That means Peaves will move between your iPhone and your friend’s iPad as they fight each other. You can connect up to four devices over local Wi-Fi to watch your pets battle for the ultimate win.

While the battle is taking place, all you can do is watch. If you’ve fed a mushroom to your pet before the battle began, you can activate its power once during the fight. To do so, tap the mushroom in the bottom center of the screen.

This battle is a fight to the end. Four Peaves enter, one Peave leaves. The last monster in the arena at the end of the fight wins. If you are defeated, you will earn coins based on how long you survived against the other Peaves. It ranges from one to 70 coins. It may even be more when your pet reaches higher levels. I have only reached level five with my highest Peave. 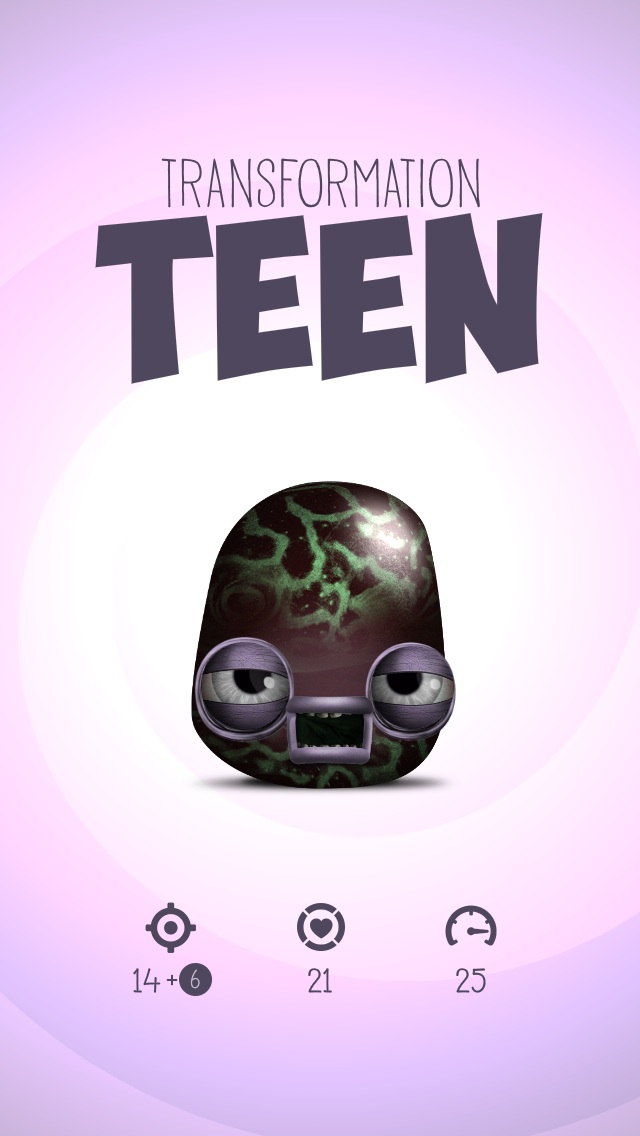 If you have ever raised a virtual pet, you will love how fun and simple it is to grow a funny monster that you can interact with. Being able to put the monster in the arena with others is even more enjoyable.

The multiplayer cross-device feature is amazing. When you set your devices side-by-side, the Peaves will battle from iPhone, to iPad, to iPod touch, in real time.

Even though you will need to buy a lot of items in the Pet Store, you will probably never run out of coins. The in-app purchase are more for unlocking items immediately that could otherwise be unlocked during gameplay.

Each box only holds 10 items, but many of the items offer different stats increases, so it is hard to recycle something useful in order to add a bug or mushroom. For example, all of the mix tapes increase different stats, so I wanted to have all of them. However, it takes up too much space in the box. I’d like to be able to increase the item capacity somehow.

When you send you Peave into battle, you have to watch the entire event. I’d like to be able to skip to the end of the fight. It takes up precious playtime.

Pet Peaves Monsters costs $0.99. That is a typical price for a virtual pet game. The best part is, you won’t feel bombarded by in-app purchases. Since you start out with 5,000 coins, it is practically impossible to use them all up. The IAPs are mainly for people who don’t want to wait to unlock additional Peaves, items, and battle arenas by earning them through gameplay.

I don’t like to use the term “addictive” very often. However, I couldn’t put this game down once I started playing. I trained three pets to level five on my iPhone and two of them to level four on my iPad in only two days. If you liked Digimon as a kid, or have any interest in raising virtual pets that battle each other, you’ll love these little Peaves. This game is available for the iPhone, iPad, and iPod touch. Download it in the App Store today.

Tamagotchi is the OG of virtual pets. I don’t really know of any virtual pet app that lets you battle against others.