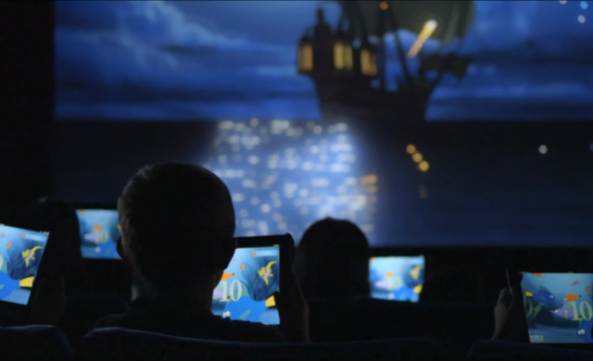 Typically, when you go to a movie theater to watch a film, you’re asked to shut down all mobile devices. “Please silence your cell phones now,” is a common request you’ll see on screen, right before your flick begins.

But that won’t be the case at Disney’s The Little Mermaid: Second Screen Live event. Movie-goers will actually be encouraged to bring along their iPads, and use them, as they interact with the film using a special app…

“Bring your iPad to the movie theater and experience special event screenings of “The Little Mermaid” on the big screen like never before! It’s “Disney Second Screen Live: The Little Mermaid,” where you become part of the story. Interact with Ariel, Sebastian and Flounder. Compete with the audience as you play games, sing-along, and collect hidden treasure. But watch out for Ursula, who just might try to steal your points. It just got better, down where it’s wetter, with “Disney Second Screen Live: The Little Mermaid.”

And here’s a little promo clip from Disney:

It’s interesting that the companion app appears to be iPad-only—no Android. But I supposed Apple and Disney have always had a close relationship. Disney, in fact, recently honored Steve Jobs with a Legends award.

What do you think, is this a good idea or a bad idea? Why?