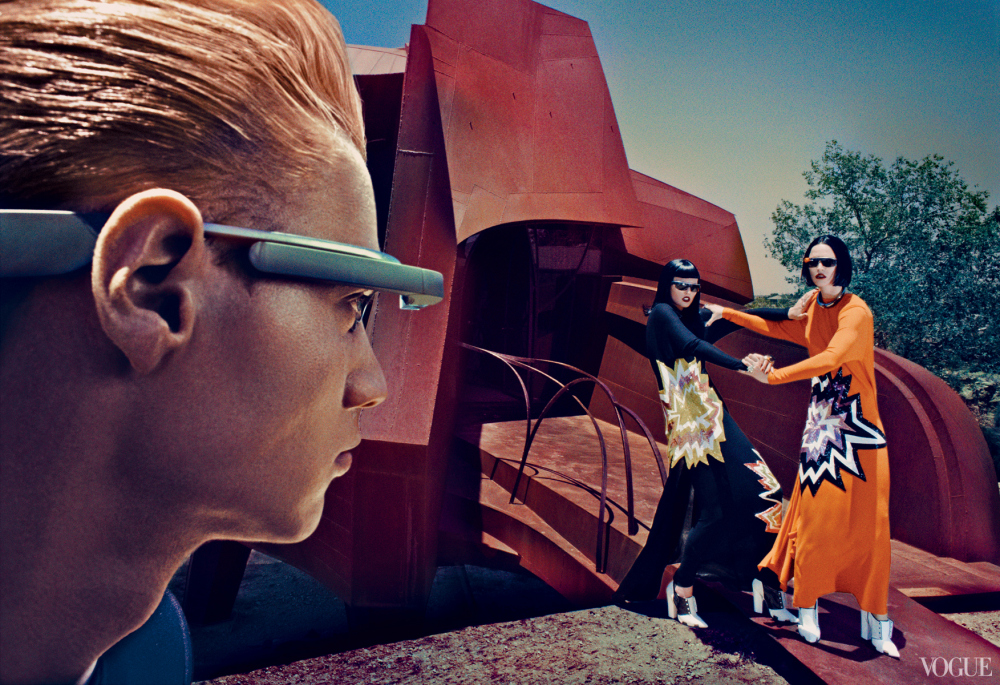 Tony Fadell, the brains behind the popular Nest thermostat, used to work at Apple where he’d helped engineer the iPod music player, earning him a nickname of the iPod Godfather. He also led the development of the first eighteen iterations of the original iPhone. In a recent interview, the famous engineer revealed that Apple in the past had experimented with the idea of a virtual reality headset and has actually built a few prototypes of a Google Glass-style device.

“The craziest thing we talked about was something like Google glass,” says former Senior VP of iPod division…

In a recent interview with Fast Company‘s Oral History of Apple Design series (via 9to5Mac), Fadell said that Apple had looked at smart eyewear before Google Glass got introduced:

At Apple, we were always asking, What else can we revolutionize? We looked at video cameras and remote controls. The craziest thing we talked about was something like Google Glass.

We said, “What if we make visors, so it’s like you’re sitting in a theater?”

Fadell himself built “a bunch of those prototypes,” but due to Apple’s wildly successful iPhone and iPad, the company “didn’t have time” to focus on the device.

This could come as a surprise to some.

Doesn’t Apple have the most resources?

Well, if money could solve these issues=, Apple wouldn’t have to seek outside help to tackle “hard engineering problems that they’ve not been able to solve” concerning the rumored iWatch.

On top of external hiring, Apple apparently tasked 100+ own engineers with the project.

As Apple’s product marketing head Greg Joswiak said in 2011, there are only “so many grade A players” out there:

It means saying no, not saying yes. We do very few things at Apple. We are $100 billion in revenue with very few products. There are only so many grade A players.

If you spread yourself out over too many things, none of them will be great.

When asked to comment about Google Glass at May’s D11 conference, Apple’s boss Tim Cook said he saw “some positives in the product,” but noted he couldn’t see broad appeal for the device.

There are some positives in the product. It’s probably likely to appeal to certain vertical markets. The likelihood that it has broad appeals is hard to see.

“I think wearables is incredibly interesting,” he said, adding, “It could be a profound area.”

It’s an area that’s ripe for exploration, it’s ripe for us to get excited about. Lots of companies will play in this space.

Apple is of course widely rumored to be working on a smartwatch of its own.

If anything, a mixed reception to Samsung’s recently-launched  $299 Galaxy Gear device reinforces the notion that first-mover advantage means nothing at a time when consumers struggle to grapple with the notion of a smarwatch worn on their wrist in the first place. 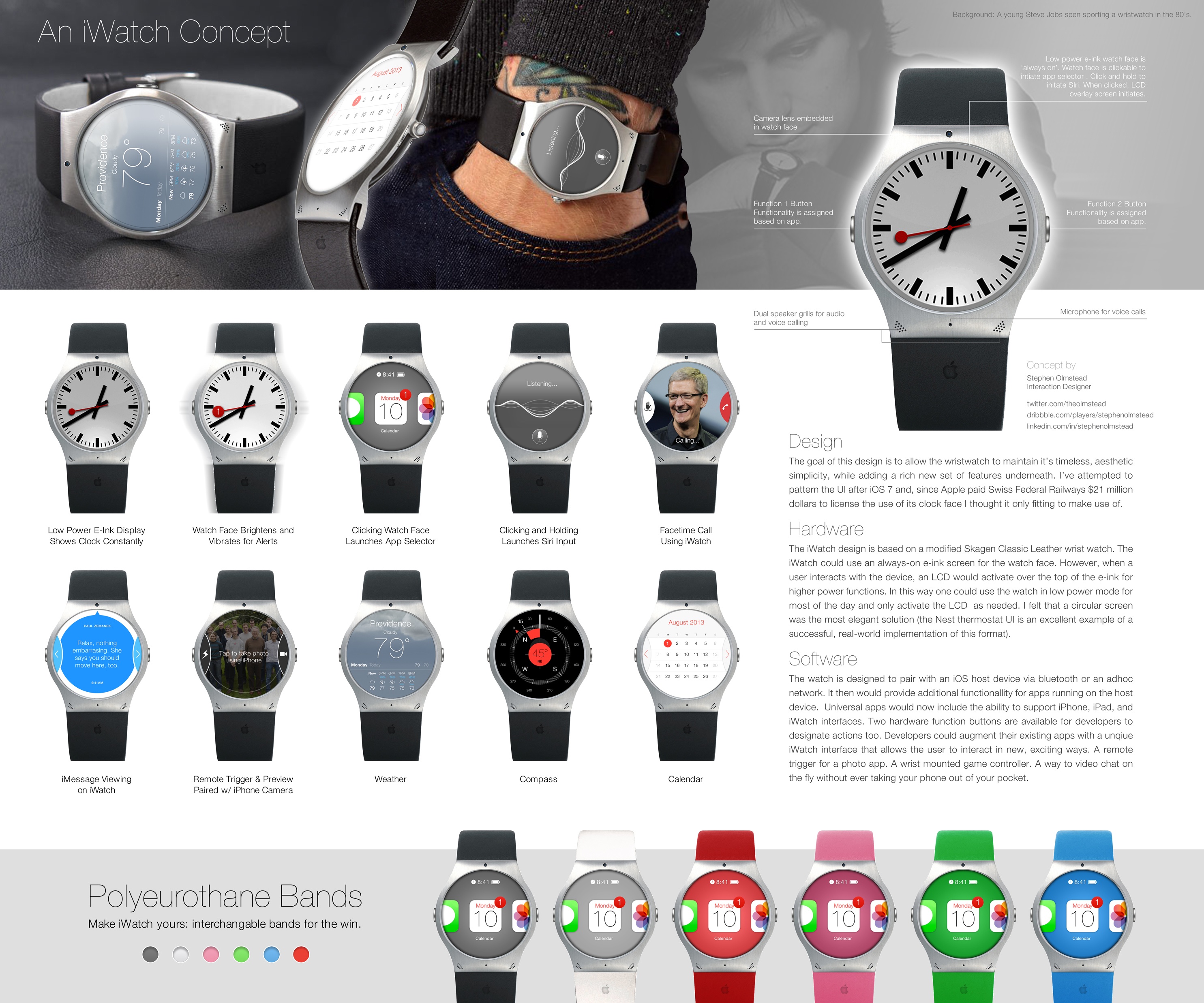 Jim Dalrymple of The Loop has an excellent take:

I have been saying for several months on Amplified that people need to get away from the idea of iWatch being a watch— think of it more as a wearable device for your life.

It’s absurd to think that Apple is going to release a watch and that was Samsung’s biggest mistake — they believed it.

For what it’s worth, Bloomberg back in March described the iWatch as a wearable device which runs iOS and includes a pedometer for counting steps and sensors for monitoring health-related data, such as heart rates.

One of the A-players on the iWatch team is reportedly Jay Blahnik, a widely recognized fitness expert and key developer of the Nike FuelBand. A report last month asserted Blahnik had taken a new job at Apple where he is said to be working on the iWatch project.

As for an Apple-branded eyewear Fadell mentioned, it’s worth pointing out the company for years has been researching Google Glass style devices. For starters, Apple owns a patent for a Bluetooth headset.

Back in 2008, Apple filed patents for its own head-mounted computer glasses and in 2010 hired wearable computer expert Richard DeVaul whose work at MIT included something called Memory Glasses. 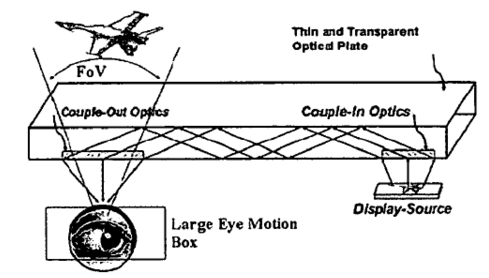 More importantly, the company has filed for a wide-ranging patent for a “peripheral treatment for head-mounted displays” (see above) which details projecting an image onto a user’s eyes in order to fill both the peripheral and the direct vision, thus achieving what’s called full immersion.

Assuming the project is real, should Apple release a Glass-like device?