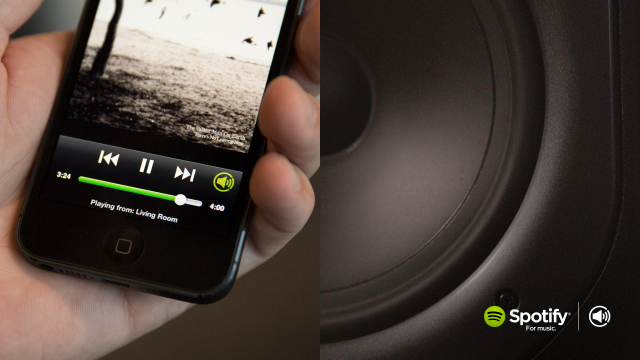 The popular Swedish streaming music service Spotify on Tuesday announced a compelling new feature for audiophiles which takes the best ideas from Apple’s media streaming technology called AirPlay, and then some more. Called Spotify Connect, the service is being billed as “the new way to play at home”.

It’s a lot like AirPlay, but with the key difference: there’s no overhead as the feature streams songs straight from Spotify’s server to supported wireless speakers. I’ve included more information and a nice promo clip after the break…

Spotify Connect allows you to move your music seamlessly between your laptop, tablet, smartphone and Wi-Fi-enabled speakers without missing a beat. The feature will require a mobile app update and will roll out to Spotify Premium subscribers on the iPhone, iPad and home audio systems “over the coming months,” with Android and desktop updates to follow suit shortly after.

Because Wi-Fi speakers do the heavy lifting, using Spotify Connect won’t drain your battery like AirPlay does. As a bonus, you can continue using your phone or tablet for other tasks and music playback won’t be interrupted when a phone call comes in.

Spotify Connect will be a new home audio experience giving you effortless control of your music across your phone, tablet and speakers with millions of songs built right in. Simple, seamless and hassle-free.

According to a media release and a blog post, Spotify Connect will be “available soon” on a range of speakers and home audio systems from such manufacturers as Philips, Marantz, Pioneer, Denon, Hama, Bang & Olufsen, Revo, Argon Audio, Yamaha and Typisch Teufel.

Some of these companies will put out new Spotify Connect-enabled gear while others said a firmware upgrade will enable the functionality on existing wireless speakers.

Look out for the following Spotify Connect logo on compatible systems.

This reminds me of Apple’s promise to work closely with audio equipment vendors on integrating AirPlay functionality. We haven’t seen much on that front apart from overpriced equipment from early AirPlay launch partners like Denon, JBL, iHome and Bowers & Wilkins

That’s because integrating AirPlay comes at a cost (i.e. licensing, hardware requirements, marketing, etc.). Contrast that to the ubiquitous Bluetooth wireless audio which is compatible with a wide range of devices regardless of the platform, unlike AirPlay.

If I were Spotify I’d also put out a dirt cheap hardware streaming dongle to enable Spotify Connect on unsupported and non-Wi-Fi speakers.