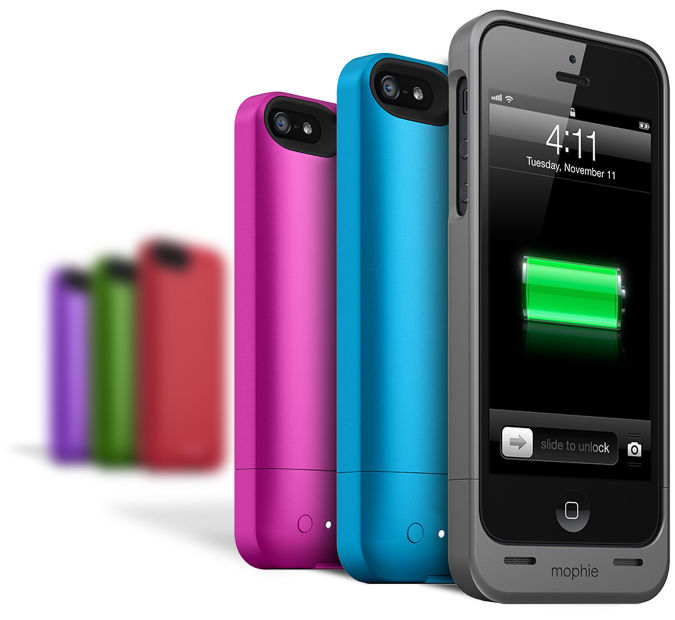 Mophie’s Helium series of battery-extending cases for Apple’s iPhone 5 are a no-brainer for power users who can’t get through their day on a single charge. The California-based accessory maker offers the Helium cases in three flavors: the 13 percent thinner standard-edition Juice Pack Helium with a 1,500mAh battery, the even thinner Juice Pack Air (just 0.63-inches thick) with a bigger 1,700mAh built-in battery and the latest Juice Pack Plus which rocks a 2,100 mAh battery, good for an additional ten hours of 3G/LTE talk time/web use.

And now, in time for Apple’s September 10 big reveal of the colorful iPhone 5S/5C, Mophie has introduced a burst of color options…

Also found on these cases: a standby switch, LED power indicator, microUSB charging port, 3.5mm audio jack, holes to access to all your iPhone 5 hardware buttons and a forward-facing speakers which redirects sound from the bottom of the phone toward the user.

Like the original Helium, the new Spectrum Collection is thirteen percent thinner than any of Mophie’s previous iPhone juice packs.

“It’s so thin, you won’t believe there’s a battery inside,” the company boasts.

In case you were wondering, the built-in 1,500mAh battery delivers 80 percent more battery life to your iPhone 5 – enough for an addition six hours of usage – while providing edge-to-edge protection against the drops, bumps and scratches.

No, they don’t offer a champagne option.

You can purchase the new Juice Pack Helium Spectrum Collection over at Mophie’s web store or through Apple’s US online store, priced at $79.95 a pop.