Apple is to patent trolls what Justin Bieber is to prepubescent girls. The iPhone maker has become the favorite target for companies whose sole product is lawsuits, according to a new study finding Apple has been sued 171 times by patent trolls over the past five years.

Since 2009, the number of yearly lawsuits by trolls (or Non-Practicing Entities, as they’re called in more politically-correct circles) against Apple has steadily risen with 24 filed through June 30 this year…

With 171 patent lawsuits, Apple is ranked as the No. 1 target of trolls, according to PatentFreedom, a group of companies which tracks NPEs and their subsidiaries.

Although Hewlett Packard has the second-largest number of patent lawsuits with 137, Apple’s lead is in no danger. In March, the same group said Apple had a 22 lawsuit lead – that number has now grown to 34. 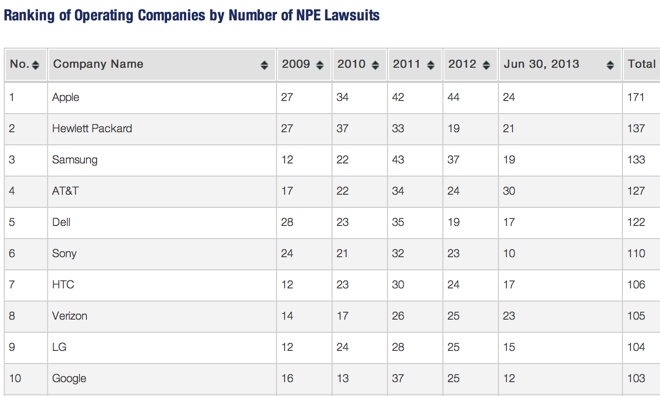 “Apple has been the No. 1 target of patent trolls for some time, but the distance between it and other companies is widening,” the group announced.

The organization, which believes the term ‘troll’ is “unhelpful,” prefers NPE to describe “any entity that earns or plans to earn the majority of its revenue from the licensing or enforcement of its intellectual property.”

Although Apple is a favorite target of patent trolls, when Tim Cook testified before a Senate panel in May his emphasis was on bolstering the power of companies to protect their patents. A month later, the FTC began investigating the issue of patent trolls.

About the same time, Apple’s head of patents left the company to join a patent troll.

Speaking earlier this week at Stanford University, an intellectual property expert said (via TechHive) that a patent “is nothing more or less than a license to sue someone.” Michael Brody of Winston & Straw also noted a lawsuit by a patent troll has a 24 percent chance of either a settlement, court victory or a winning appeal.

It costs at least $800,000 to defend the average patent lawsuit, licensing a patent following a trial costs $7.5 million while out-of-court settlements cost around $29.75 million, according to Brody. Together, the annual cost of defending these lawsuits can range from $7.9 million for smaller companies to nearly $58 million for large corporations.

At another level, patent infringement lawsuits are viewed as a competitive tool to keep your rival’s products either off the shelf or pay hefty licensing fees. The best example: the long-running global patent lawsuits swapped between Apple and Samsung.