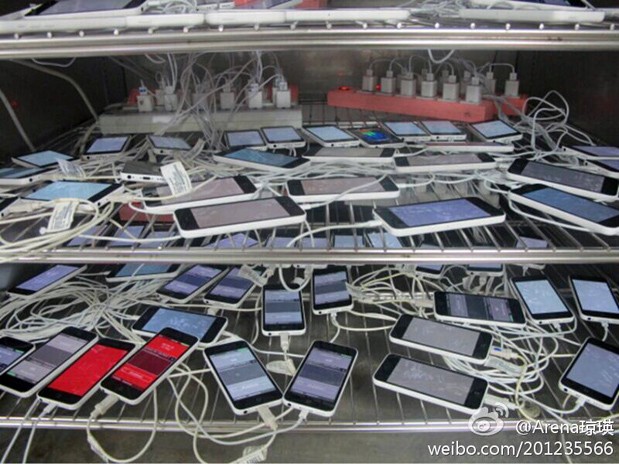 A new photo surfaced earlier today, claiming to show a dozen or so iPhone 5C units in testing. Apple, like all electronics companies, requires its manufacturers to test small batches of its products for quality assurance purposes.

But between the company’s notorious demand for secrecy, and the inability to confirm these are actually iPhones, we figured the handsets in the photo were more than likely knockoffs. But it turns out, they may be the real deal…

Engadget has done some digging on the photo’s origins, which was first posted by Nowhereelse.fr, and they believe these are really iPhone 5C units being “warmed up” at Pegatron’s Shanghai plant. Here’s the site’s Richard Lai:

“But after digging around the original poster’s Sina Weibo profile, we deduced that this spy shot came straight out of Pegatron’s Shanghai plant…

According to her posts, the cheeky employee — or more likely an ex-employee at this point — in question joined the company’s quality control department around mid-July.

…We’ve seen this in factory tours before, but no photography was allowed in the production lines; which makes us wonder how this shot came out of a supposedly well-guarded environment.”

The photo, Lai says, was posted yesterday with the following caption: “The low-end iPhone 5C to be launched for Chinese consumers in September doesn’t look much different than the Xiaomi Phone 2, right?” I guess, yeah.

That Engadget traces the photo back to Pegatron adds weight to the theory. It’s widely believed that it has been handling a bulk, if not all, of Apple’s budget iPhone orders. And it’s been all-but-confirmed by Pegatron employees. 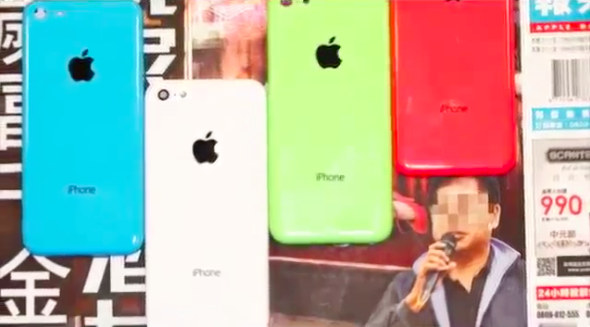 It’s not quite clear what is going on in the image, but it appears to be some kind of testing. Lai calls it a “warm-up procedure,” saying it’s likely being done with small batches to make sure the devices are functional before boxed..

We’ve seen enough budget iPhone reports and part leaks to have a pretty good idea of what to expect. The 5C will likely be made of plastic and metal, resemble the iPhone 5 in design, and will debut alongside the iPhone 5S next month.