Ever since Apple in February 2012 bought Chomp, an app discovery engine, and subsequently killed both its Android and iOS apps, the rumor-mill has been abuzz with the supposed improvements to the App Store discovery stemming from the acqui-hire.

Disregarding the occasional tweaks to the App Store search algorithm here and there, the experience of discovering popular software beyond the apps Apple exposes on the main App Store pages remains a very tedious affair.

To put it perfectly bluntly, it often feels like finding a needle in the haystack. But according to a new report out Friday, things could soon improve as the company’s apparently been experimenting with new algorithms for iTunes and App Store rankings…

According to research firm Fisku which monitors changes to the App Store charts:

After some in-depth (and still ongoing) analysis by our Performance Labs team, we can conclude that Apple is testing changes to the iTunes ranking algorithm.

What we don’t yet know is the entirety and permanence of these changes.

The key to better rankings: user ratings. For those wondering, Apple typically bases App Store and iTunes rankings on download volume and velocity of those downloads.

In order to rise up the ranks, your app needed lots of downloads in a short amount of time. And to maintain that rank, you needed to continue acquiring new downloads. 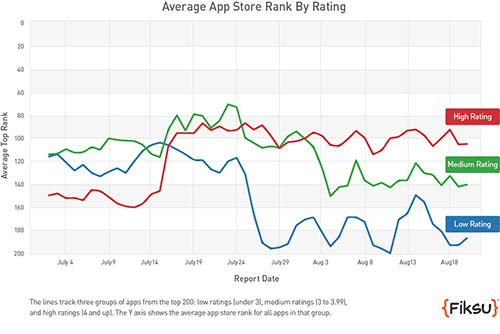 Fisku began noticing the changes in late July, with apps “unexpectedly shifting position” without a corresponding increase or decrease in downloads.

The research firm contributed the change to the inclusion of  user ratings.

As evidenced by the graph below, apps with ratings of 4 or more stars received a rank boost in late July and have maintained that rank throughout August.

Poorly rated apps with less than 3 stars received the opposite treatment about two weeks later, dropping off precipitously in rank and staying that way.

Average rated apps, between 3 and 4 stars, suffered a slight degradation in rank but have generally been less affected.

They also noticed that changes in rank now happen every three hours versus every fifteen minutes as before. Unless Apple is simply optimizing the algorithms ahead of a surge in downloads come September 10, this new buffer time should basically let the App Store team prevent charts manipulation.

How come, you ask.

Easy, the three-hour window allows for more time to “identify anomalies and remove apps before they suddenly appear at the top of the rankings,” Fisku explains.

It is a high time Apple made substantial changes to the algorithms that power its content stores. The way it is now, the App Store search is a joke, more often than not producing unrelated items or sorting content in a seemingly random manner rather than based on its real-life popularity.