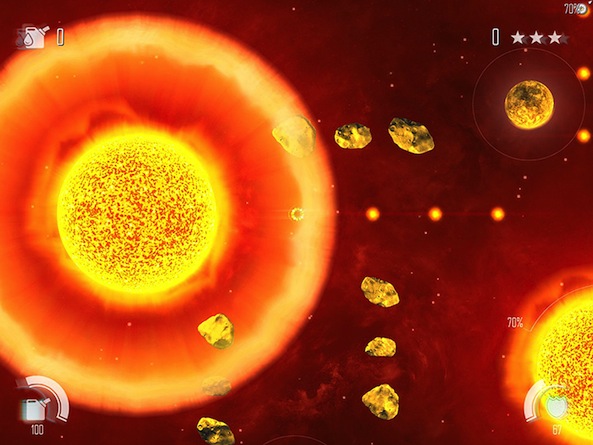 Firebrand Games recently launched an iPad game that looks like it came straight from NASA’s image archives. If you’ve ever wondered what deep space might look like, now is your chance.

Solor Flux HD is a physics-based puzzle game that puts you in the seat of a plasma-gathering shuttle. Collect as much plasma as possible and spit it back at the sun to stop it from dying…

Players are on a mission to save the dying galaxies across the universe by collecting plasma around nearby planets and then shooting them into the sun. Each galaxy needs all plasma in the surrounding area, so you must figure out how to gather it up while using as little fuel as possible.

Planets have a small gravitational radius around them that you can use to help get from one place to another. Whenever you shoot plasma into the sun, it gives off a solar flare that pushes your shuttle outward. The force of the flare will help move you to the next planet’s gravitational pull. 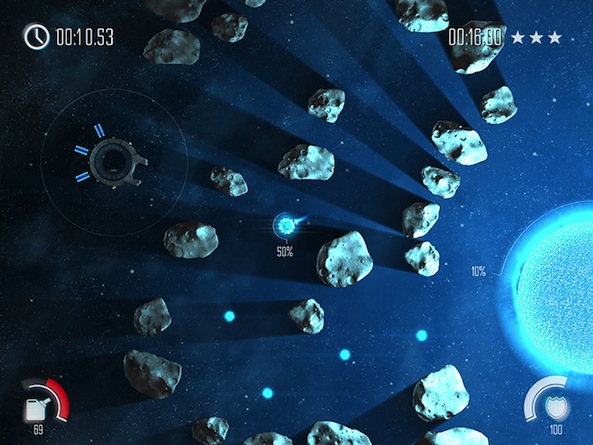 There are obstacles in the way, like supernovas, asteroid fields, and meteors that you must steer clear of while collecting plasma. Avoid damaging your ship or you’ll be lost in space.

There are also “Heat” missions, where you must perform tasks inside the sun’s heat zones. The heat damages your ship and you must hid behind nearby planets in order to cool off and recharge your shield in the shadows.

The game is based on touch controls. To use fuel to project forward, touch the screen in the opposite direction that you want the ship to go. Of course, the less fuel used, the better. You earn more stars for completing an entire level with the least amount of fuel.

The game’s real “wow factor” is the graphics. There are four different galaxies, each with 20 missions. Each galaxy has a different look. For example, the Helios galaxy is rich in reds and oranges to represent the heat that the sun gives off, while the Oceanics galaxy has shades of blue to imply the cool waters of the ocean.

Solar Flux HD is only available for the iPad. You can pick it up in the App Store today for $3.99.