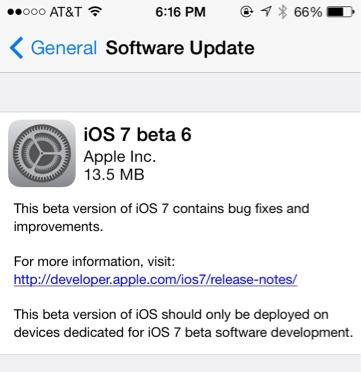 Apple has unexpectedly seeded iOS 7 beta 6 to developers this afternoon, breaking its typical two-week cycle. The update comes just a little more than week after beta 5 landed, and appears to be an emergency fix-related release.

Beta 6 is available now to all registered Apple developers via both the Dev Center and OTA, which can be installed by visiting the Software Update section in the Settings app of proper devices that currently have iOS 7 installed…

A report from BGR earlier today claimed that Beta 6 would be released next week, with a GM build landing on September 10. However, it seems the site’s sources weren’t aware that there was a problem with iTunes in the Cloud.

This update address an issue with iTunes in the Cloud, where some purchases may download or play unexpected items. If you have any devices running previous versions of iOS 7 beta, you must:

Outside of this, we’re not aware of any other changes in beta 6. But rest assured we’ll be combing over it this evening for anything worth note. And as always, feel free to let us know if we missed anything by emailing tips@idownloadblog.com.